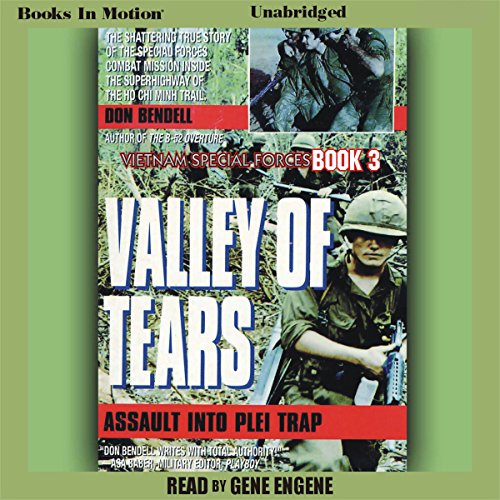 Valley of Tears: Assault Into the Plei Trap Valley

By: Don Bendell
Narrated by: Gene Engene
Try for £0.00

Valley of Tears: Assault Into the Plei Trap Valley is another action-packed autobiographical look at a very special mission. In the late summer of 1968, several intelligence sources stated that numerous American POW's were being held in bamboo cages for transport by vehicle up the Ho Chi Minh Trail from the North Vietnamese Army stronghold the Plei Trap Valley.

Special Forces CPT Joe Dietrich and 1LT Don Bendell volunteered to lead a helicopter assault into the Plei Trap Valley with 100 Montagnard mercenaries as the point element of a joint task force of soldiers of the 4th Infantry Division. This book tells the harrowing tale about the adventures and misadventures of the two on this dangerous mission.

What listeners say about Valley of Tears: Assault Into the Plei Trap Valley

Should have listened to the last guy....

The last review I read was right...the author skips around, is hard to follow and confusing at times. I thought I was going to read about the Plei Trap Valley, but I think this was more about his romance with Ming, the woman he cheated on his wife with. Thanks for your service sir, but I as hoping to hear about POW rescue missions and the like. Not about picnics with Ming and the "passionate love you made."

Do yourself a favor and skip the book.