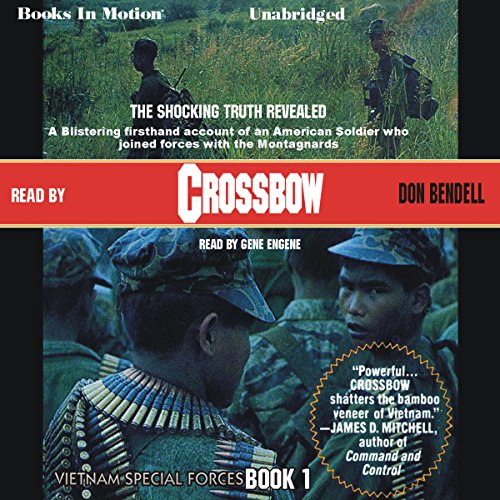 Crossbow was Don Bendell's first book ever, but many still say that it was his best, as it was written very much from the heart. It is the autobiographical story of a young very gung ho Green Beret first lieutenant in 1968 and 1969 and his love affair with the Jeh tribe of Montagnards, a proud, family-oriented tribespeople in Vietnam's mountainous Central Highlands region, the action and intrigue of a horrific war, and the plight of the Montagnards who were racially-discriminated against by our allies in Saigon. Get wrapped up in all the inherent passion, horror, heartbreak, laughter, and tears with such a story.

If you could sum up Crossbow in three words, what would they be?

Not a battle story, but a real story of how it was, and how real people struggled against real prejudice. I gained a perspective I could never have found in any history book

What was one of the most memorable moments of Crossbow?

The main character leads a mission and an older, self-appointed bodyguard is critically injured. He is Montain-Yar (sp) so is minority and hated by both North and South Vietnamese. The medic won't treat this man because of his race. The American treats the injured man himself. He beats the prejudiced medic senseless. In this place of hate and torment, the Seal uses his strength to protect the weak. He is the way I envision our best servicemen.

What does Gene Engene bring to the story that you wouldn’t experience if you just read the book?

He speaks the language well enough to make repeated words clear. In print I would have stumbled over these. He brought the people to life.

The real victims in Nam, and how our men protected them.

I felt strong empathy and patriotic emotion in this novel. I think this part of Nam has been lost in the press. Just because a soldier is strong, does not mean he can't be empathic to those weaker than he.

Thought this was an excellent audio book and knowing SF it was fairly factual and if you haven’t been there this is a good one...