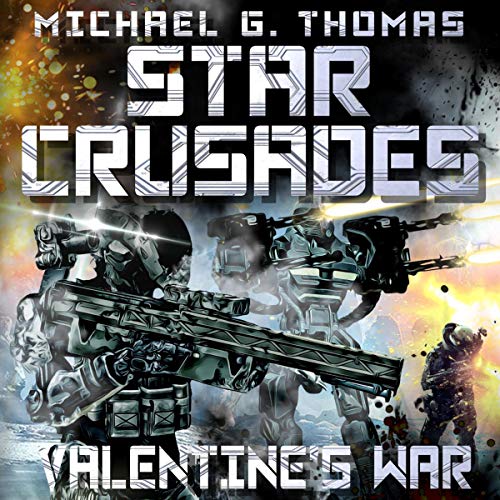 By: Michael G. Thomas
Narrated by: Nathan Tarantla
Try for £0.00

Valentine and her Novas are the only known survivors of the fall of Epsilon Eridani. A new and deadly threat known only as the Ski’ligs sweeps through the Eridani System, capturing planets and moons in a matter of weeks. This high-tech race displays an unsurpassed knowledge of science and warfare that threatens the safety of the Alliance and beyond. Their avian species thrives on hunting and war and uses their aerial abilities to hit and run before they can be brought to battle. This method of warfare applies to their fleet advanced warships that block any attempts to retake the system.

The Alliance cannot let this aggression stand, especially against a new and prosperous colony deep inside their own territory. With faith in the Alliance at an all-time low, the public demands action against the new threat. General River, the hero of the Biomech War is brought out of retirement to lead the assault. He commands a fleet or transports, spearheaded by an array of military vessels as they bring in regiment after regiment of foot soldiers. As always, the Novas will be at the front of the battle as they tackle the toughest and most dangerous missions. The first encounter with the Ski’ligs was little more than a skirmish. This time it’s war.

Valentine's War is the second book in a brand-new saga in the style of Starship Troopers, Alien, and Predator. A story which will take the listener to new worlds to face new and deadly threats to the Alliance. This is an epic story with incredible characters and even more incredible and advanced technologies.

What listeners say about Valentine's War

I enjoyed this although it did take me a while to get into it as Valentine isna true and tested formula although i have seen this idea done better. Once i got into the story a bit this was quite good although you can guess at the story.
Narration was reasonable but i did find the voice a bit nasally until i got used to it so i wouldn't automatically go for futher narration by Tarantla again unless i liked the story.
I requested this audio and have decided to leave my thoughts on this.