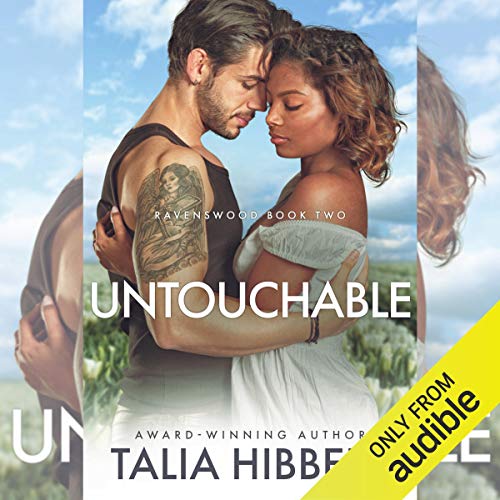 By: Talia Hibbert
Narrated by: Rupert Channing
Try for £0.00

What happens when a bad boy becomes a man?

Nate Davis didn't plan on returning to his hateful hometown. But then, he didn't plan on being widowed in his 20s or on his mother getting sick, either. Turns out, life doesn't give a f--k about plans.

Hannah Kabbah thought her career in childcare was over. After all, no one wants a woman with a criminal damage conviction watching their kids. But when her high school crush returns to Ravenswood with two kids in tow, she gets the second chance she never dreamed of.

She also gets to know Nate - the real Nate. The one whose stony exterior hides aching vulnerability. Who makes her smile when she wants to fall apart. Who is way, way more than the bad boy persona he earned so long ago, and way too noble to ever sleep with the nanny.

So it's a good thing she's completely over that teenage crush, right?

What listeners say about Untouchable

I Loved this story. It's my second Ravenswood book. cant wait for the next book.

The quirks of the hero and heroine gave this story depth that many romances just don’t have. When he was describing depression to her while holding her in the dark, I cried. It was so obvious they had both been to that dark place and understood each other. The quirks between Hannah and her sister Ruth from the first book that they were able to overcome and find kind, loving, patient men who are willing to go the distance with them gives me a warm feeling that I don’t often have from romance novels. These women were broken and grew through their experiences. They grew through their stories. This was a wonderful story, as was the first in this series. Hannah is a warrior.

Loved this book! Depression does not mean unlovable. The storyline superbly show cased the inner working of depressed individuals as the multidimensional people they are. Nate and Hannah are perfect for each other in a normal and extraordinary way. Hibbert's writing of real people falling in love is unique and heartwarming.

Polite and meek...all the things Hannah wasn’t.....she was blunt and forthright.
Nate was a widowed father of two young kids doing the best he can but stressed about everything not within his control.
They went to the same school as kids (and secretly crushed on each other) but it was at least 15 years later before they literally collided into each other’s lives.
Things would never be the same.
She eliminated his stress...unless she was the one causing it. And he made her see her inner and outer beauty...he also was able to make her smile and then eventually laugh...no small feat.

Small town gossip aside, these two, once they were brave enough to acknowledge their feelings for each were pure electricity. The heat and passion was consuming and at the same time the humor was enough to make me laugh out loud.

I loved Hannah and Nate and rooted for them the whole time.

Talia Hibbert has written a mature, funny and sexy book (again!) and the narration by Rupert Channing is everything I wanted.
He managed to effortlessly take Talia’s words and place me firmly in the center of Ravenswood where I cheered on the loved up couple.

I loved the first book in this series SO MUCH and the second was also a wonderful delight! Hibbert's writing is so clever, funny, kind - and full of ENTHUSIASTIC consent --- 🔥🔥🔥! Rupert Channing did a great job narrating!

This book was sweet and beautiful and I enjoyed reading it

I also love this reader

This is Ruth Kabbah’s older sister Hannah’s story. It feels like she is also on the autism spectrum, so she tends to be clipped in some of her speech patterns, but she has much stronger socializing skills and social stamina than Ruth does. She has an incredible memory which can get her in trouble in her dead end barista job when she calls out a customer for claiming Hannah got her order wrong. Hannah has a bit of a meltdown, quits, stuffing her pockets with marshmallows on the way out, and literally runs into her former school crush’s kids in the park. As established in the first book, Hannah is excellent with children and has a degree in early childhood education but can’t work in her field because she trashed the town golden boy, Daniel’s car after she found out about his secret long term abusive relationship with Ruth.

Single dad Nathanial Davis, a widower who’s moves back to town to be closer to his mum while she undergoes cancer treatment, is impressed with Hannah’s skill with his kids and hires her as a live in nanny. He had a crush on her back in the day too, but neither of them knew they had feelings for each other. He’s uncomfortable to realize he’s got feelings for Hannah now, which is awkward because she’s his employee. In a refreshing twist on this trope, he’s aware of the power dynamic and doesn’t want to take advantage of Hannah in any way, so there’s a lot of resistance on his part as their attraction grows.

I also really liked that he had a good relationship with his late wife. Too many romances with widows or widowers make the deceased spouse into The Wrong One. This was not the case here, and we get to see Nate dealing with his grief in a natural way.

While Nate is a now a gorgeous, successful photographer, he was an undiagnosed dyslexic as a schoolboy and dealt with depression and acting out because of that. I really liked his relationships with his mum and his brother-they talk and connect in authentic ways.

Hannah has lifelong issues with depression, anxiety and possibly OCD. She takes helpful meds and has learned coping mechanisms. I loved how matter-of-factly Hibbert talks about these issues and how shame-free the use of therapy and meds are.

Hannah also has relationship issues; she thinks when anyone really gets to know her they leave, so she’s freaked about letting Nate in.

There is some drama involving town gossip, Hannah’s mom’s disapproval and Nate’s mum’s cancer treatment and medical misdiagnosis. Everything ends happily tho.

Hopefully we get another story

These were good stories. The author had the angst of the heroine drag out too long but overall enjoyed it

Loved the story, and really liked the narrator! This is the 2nd one of this authors books I’ve listened to, both in this series. I have really liked the characters. I’m looking forward to reading more of her books.

No more books by this author. The women are just pathetic and sorry. The hero had issues too but the female lead was mean, had self-esteem issues and was not likable. These are my opinions. The narrator did a great job.