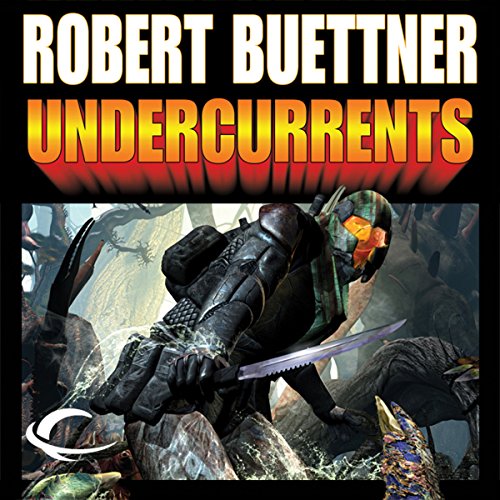 By: Robert Buettner
Narrated by: MacLeod Andrews
Try for £0.00

Ace intelligence operative Lt. Jazen Parker parachutes into Tressel, a planet that resembles Earth in its Paleozoic era, on a mission to bring down the local politicos. He quickly realizes he's been handed a near-impossible task. Tressel is a politically quarantined nightmare world with a culture confined to iron-rivet technology and a ruling regime a bit to the right of Heinrich Himmler. Jazen's inclined to abandon this particular hellhole to its ways - that is, until he uncovers a plot afoot that will throw a 500-planet alliance into the death-throes of anarchy.

So the local Nazis must go. Unfortunately, all Jazen's got to work with is a handful of rust-bucket tanks, a retread rebellion, and two strong, beautiful women who love him but think he's tilting at windmills and is about to get himself killed. What they don't know is that, once committed, Jazen Parker is the best there is when it comes to getting a dirty job done on the ground. It's the local bullies who are about to be taught a lesson in losing.

What listeners say about Undercurrents

I recently finished listening to Undercurrents by Robert Buettner. This is the second book in the Orphans Legacy series.

While I will do my best to minimize them, reviews of any book in a series other than origin book are bound to have a few spoilers. If this is an issue for you then I suggest you stop reading now.

This book encounters our reluctant hero Jazen, a former true born agent turned barkeep. He left the service because his senior team member, and love of his life, refused to work with him.

He is drawn back into service against his will and only because the love of his life has disappeared. He has a faint hope of either rescuing her or revenging her death. This romance is the driving force behind this adventure, though it seems clear that this may be a case of unrequited love.

While there are both unbelievable success's and failures, they happen to all sides with enough regularity and even handedness to make them feel natural. The adventure is interesting mix of a traditional Military Sci-fi novel and a travelogue. As a result the world is fleshed out solidly and gives the story additional depth.

Conclusion: I think this is a solid pick for anyone who enjoys Military Sci-fi, especially if they like a bit of romantic tension throughout the tale.

If you could sum up Undercurrents in three words, what would they be?

Fun story, witty, believable story line. Good mix of humor with situations that were believable, (for the most part!)

What other book might you compare Undercurrents to and why?

Which character – as performed by Macleod Andrews – was your favorite?