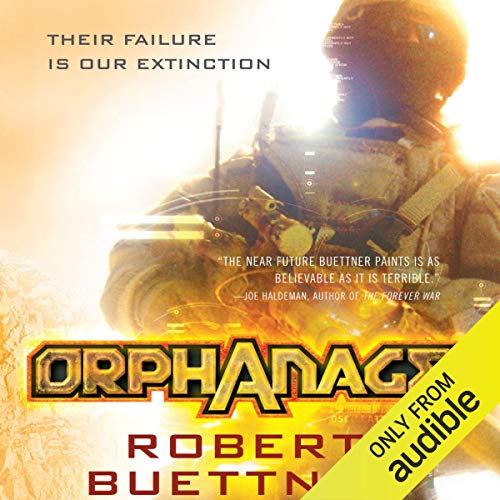 They have one chance to attack, one ship to attack with. Their failure is our extinction.

What listeners say about Orphanage

Sorry but I couldn't finish it. (performance 👎)

The story might be great but I can't get into it because of the terrible performance. The guy reads like he very rarely reads anything, with practically the same irritating intonation in every sentence- giving no sense of the tone the book was meant to be read in. Do better, Audible.

good read, little lacking on substance but worth the read all the same. I,'ll pick up the next in series to see how it pans out.

The title of this review is really all I wanted to say. This is workmanlike military science ficton. Not exceptional, but well over the minimum "fair average quality which would pass without objection in the trade." Like all military SF, it's really an extended essay on the stuff that matters in life: duty, sacrifice, competition, friendship, the value of life, and the fear of death, all illustrated by stories featuring the things that entertain us all: violence, sex, and good triumphing over evil. Buettner has his own slant on all of the above. Good for him. What more could we ask?

Mostly we could ask for a reader who doesn't sound like an idiot with a sinus infection. It grates. I suspect Adam Epstein is trying too hard to channel the personality of the first-person narrator, who is a fairly emotional high-school drop-out. But that doesn't make him (or any real-life high-school drop-out) an idiot. The POV character certainly doesn't behave like like an idiot, and the other characters don't react to him as if he were one. The effect is dissonant, and becomes more so as the narrator gains in rank and experience.

Still worth listening to. Hence the three stars, but the paper book would be a better choice.

I loved the stories and the characters; however, I won't buy the series from Audible because the narrator, Adam Epstein.

It sounded as though he was trying to sound like John Wayne. It was very distracting.

The narrator is so bad the half the time you can't understand him.

What was one of the most memorable moments of Orphanage?

Couldn't begin to tell you. The story wasn't bad but the narration sucked.

the narrator puts the emphasis on the wrong words, adds emphasis where it doesn't belong, and reads in the same tone of voice throughout the book as if every word was the most important in the whole book.

If you could play editor, what scene or scenes would you have cut from Orphanage?

if I could hear this story read by someone who could actually read I might be able to answer this. Every scene was as unimportant as every other scene.

a new narrator might make a difference but this guy makes buying this book a total waste of money, in I addition to making it one of the most irritating books ever. I gave the story three stars because the story was compelling enough to keep me listening for quite a while before I had to give up due to the irritating narrator.

A bit Childish and simple but good

If you want something unobtrusive and easy going, than this story deserves your attention.

PS
I hope book 2 will be available soon

Half a HOOT--half clever military sci-fi

Ok.....Everyman screw-up post-teen goes to war in space after evil aliens bombard Earth -- and he (painfully) becomes a man. It sounds familiar, but this book (and the inspired narrator) give this story a series of clever twists. If you like books like Redshirts (or the discussions surrounding Bun-bun -- the massive future tank-like armored vehicle in Ringo's Aldenata series -- not the rabbit) quick-witted, quick-moving with lots of wry asides. . .this is a winner. How did I miss this? And there are 4 more on Audible !!! It deals with serious issues along the way, and the plot actually picks up more of an edge as it goes -- but for a refreshing and smart book, you will like it. One reviewer (who still gave it 4 stars) wrote they had fun but that the story was a bit simplistic. Each time I started to think it was simple I realized the author was playing on themes and almost clichés that I was supposed to recognize and anticipate. Then we veered off in another direction. I am really looking forward to book 2 in the series. (I have not read this in print at all so I can't really compare, but this is so good on audible....the inflections of the reading are great.) In conclusion, I note that I review about one in 10 books I listen to. I reviewed this, hope it is useful.

This book is just not put together very well. From the writing style to story to character.

What I liked least was the fact that the main character and his friend are in highschool when the story starts. If I make it out right, 6 months later his friend is an internationally known space pilot who cavalierly takes control of Space Shuttles etc.

If you want a good book that is totally the opposite of this writing wise, try either Old Man's War or Armour by Steakley.

this story may be an ok story on its own. I may have been able to overlook the shoddy story build up, and forced main character.

But the voice acting... oh god, the voice acting! the narrator sounds like he has been punched in the nose. and he only has two or three whiny or preppy voice. he may do good for young children's novel, but this book tries to be serious, and that's just not this actor!

Not the usual stuff

Most SF books I have read lately portray a world of the future where global warming has destroyed or decimated the world, religious zealots have taken over with disastrous results, or capitalism has run amok and impoverished 99% of the population. This book has visited the future without using the liberal agenda as a guide, and is a refreshing change from that template. It is not like you are listening to conservative talk radio. The author simply does not overtly push the liberal agenda. Refreshing!

I am in full agreement with the other reviews. It's simple, fast paced, sci-fi. Very reminiscent of Starship Troopers in overall plot. The author does take some pains to keep the science plausible (gravity, lightspeed, propulsion, atmosphere.... issues that sometimes get glossed over.)

The narrator is mostly good except for the idiotic voices he comes up with. They're pretty awful.

The story is honestly very good with original elements and holds up well even with its age. The writing is personal, set in the first person as the protagonist telling their story after it's been completed, and direct without feeling either overly verbose (unlike me) nor unintelligent. The first book, as this is one in a series, sets the stage while keeping things fairly simple compared to the rest of the story and overall. It's clear that the author either served in the military or consulted closely with those that did and integrally understands not just the details of the military but the mindset of those who fight. For me it's nearly a masterpiece....however, if like me you are bothered by such things, it is damaged by the infection of feminist undercurrents. Literally every female character in the book with the exception of the bimbo, whom is written specifically and defined as such, are the best at their job while putting their male counterparts to shame whether it's being an infantry machine gunner or shuttle pilot or the next generation of infantry gunner (who also beats up their male squad mates in first fights because giiiirl power!) It goes slightly out of it's way to make men look like they are lucky to just keep up with the women as bumbling incompetents vs cool professionals. One scene appears to support the very real idea that men are, generally speaking, the sex of choice for executing warfare only to in the very next sentence go "got you, just joking, don't you look stupid for thinking that". Its disappointing to have in a work of such high quality. But if you don't mind or even like such ideologies in you books or media or can get past it then this book and the rest of the series is a must read for any fan of military sci fi. Honestly even if it bugs you like me, it's still likely worth your time.