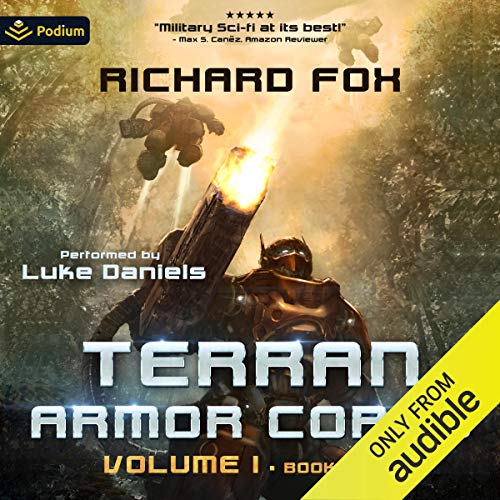 By: Richard Fox
Narrated by: Luke Daniels
Try for £0.00

Contains the 2017 Dragon Award winner for Best Military Science Fiction or Fantasy, Iron Dragoons (book one), along with The Ibarra Sanction (book two), and The True Measure (book three) of the Terran Armor Corps series!

Soldiers of the Terran Armor Corps wage war across the stars. Wired into mechanized battle suits, they fight the terrifying battles that must be won, no matter the cost. Their deeds are legend, their reputation feared by the enemies of Earth and her allies, but how the Corps forges young men and women into mighty warriors is shrouded by mystery.

Roland Shaw lost his parents to war; he volunteers for the Armor Corps to honor their memory and discover just how far he can push himself. To succeed, he must find the iron in his heart and prove himself worthy to the Corps. For the Armor, there is no substitute for victory and to fail is to die.

thoroughly enjoyable. I read everything else in the series and I'm really looking forward to the next. I am Arma

Not to say it was badly written, it wasn't (for the most part). There's a distinct lack of descriptive expression, you'll hear the word 'said' about 50 times within a single conversation. But I really didn't like the lore or how it came to the forefront in later books. Also its spirituality is very tacky and its main character is boring. Not to mention the main character's arc is terrible, as a former soldier I was going crazy at his actions. Normally I can disassociate from fiction well enough, but I found the main character's behavior in the third book sort of disgusting. I had a really hard time finishing the third book, and can't recommend this.

I love Luke in the Iron Druid Chronicles and was shocked and excited he did these books. Best narrator ever, and brings what is I’m sure an amazing read to a next level experience. Can’t recommend this enough.

This book will keep you tuned in

Good book. The voice actor is diverse enough to keep characters identifiable . I will be listening to more.

I loved some of the combat scenes, the way the armor is just a juggernaut against infantry, crushing skulls, throwing corpses or using them as a melee weapon against other enemy combatants. as well as awesome fleet combat, incredible worlds, rich and complex political environments, I have only gotten through the first couple books of ember wars, but I'm stoked to see after what? 12 or something books in the ember wars series there's several "spin off" series, and this one did not disappoint! although it takes place years after the conclusion of ember wars, and j have not finished it yet, it still made sense, mentions characters from it, (mostly the armor lance) but even though there was a few references that had minor spoilers you don't need to finish the ember wars to appreciate this, and I will be going back and slowly getting each book of the entire series. exceptional story, excellent story teller, and I will support this author as much as I can and hope he can provide many more years of these incredible stories!

it is what it is but well put together

I am happy I stayed through book 1 to 3. Almost gave up at the beginning. It didn't feel like the enthralling action common in series like Galaxy's Edge. Now I am permanently hooked, for this is a definite favorite. I AM ARMOR!

I held out on this series of books because Armor was not my favorite aspect of the saga. Dont misunderstand me, Elias is an amazing character but I always felt Armor were just a touch too OP and arrogant. That said...Ken Hale was equally lucky or unlucky depending on ones view of his experiences. Armor still are arrogant and overpowered, and for all the right reasons. Roland Shaw is a character that finally explores all the mystery surrounding the Armor Corps, and gives us rational insight into such an irrational sacrifice of the most precious commodity humanity has....true born humans. Sure, that's my own opinion but the fact is the most revered soldiers in the Milky Way, can't be grown in tubes. Yet they will defend even procees with their precious blood.

Luke Daniel's performance is superior as with all other books in the series and helps carry the story along at the perfect pace. There was one chapter in book 3 that clearly sounded different from the rest of the books, possibly a new recording device or program, but it passed quickly and could not reduce the rating of his performance.

I guess I saved the best series for last. Time to get on with the story.

Started off real slow, while getting a little bit towards the end. Ill probably get the next book just because i have so much time vested, but maybe not!

I'm hooked and need my own armor and sword

This series took me by surprise. I listened to them out of order but it was like seeing a new perspective on the missions. Great character development. The voices didn't run together( nice job reading ) and each story made me want to listen to the next. Which...I need to find and do now. I wish audible had them numbered 1 through....x so I could follow it better. see ya next book!

I really like this series. going to purchase volume 2 next. highly recommend reading or listening.