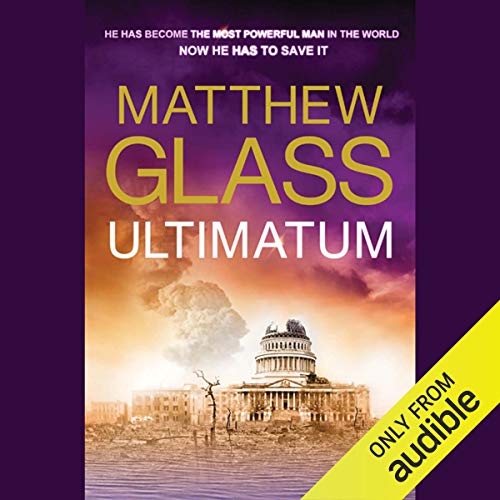 By: Matthew Glass
Narrated by: Phil Gigante
Try for £0.00

November 2032, Joe Benton has just been elected the 48th president of the United States. Only days after winning, Benton learns from his predecessor that previous estimates regarding the effect of global warming on rising sea levels have been grossly underestimated. With the world frighteningly close to catastrophe, Benton must save the United States from environmental devastation. He resumes secret bilateral negotiations with the Chinese - the world's worst polluter - and as the two superpowers lock horns, the ensuing battle of wits becomes a race against time.

With tension escalating on almost every page and building to an astonishing climax, Matthew Glass's visionary and deeply unsettling thriller steers us into the dark heart of political intrigue and a future that is all too believable.

What listeners say about Ultimatum

The basic premise is about a newly elected president (30ish years in the future) of the USA has to deal with much worse climate change than previously expected. This starts off as secret negotiations with china but slowly unravels.

The books starts off fairly slowly and I don't think the narration helps. The narrator to my ears has an sort of old fashioned American voice and his delivery seems to exacerbate the slow initial pace of the book where there is much dialogue and very little action as the new administration is put together and a strategy to dealing with china decided. Once the pace of the story picked up the narration was not an issue (I'd also gotten used to it by that point).

When the negotiation start to unravel and spill out onto the world stage the book is much more engrossing but I never felt myself really liking any of the characters. Even the president who seems to be an idealist of West Wing proportions comes across as kind of wishy washy.

However I think my main problem with the book is that I never really bought in to the central premise of book that climate change will increase exponentially and cause large areas to be uninhabitable unless emissions cuts are made. This was explained early on without much scientific detail and never really expanded on apart from some very brief economic modelling and coupled with the fact that not one of the characters was actually directly affected by climate change. In fact the only real effect of climate change that we see first-hand in the book is a fire in California. This always made me feel that the increasingly desperate actions taken weren’t really justified by the problem. I do believe action needs to be taken on climate change but ironically while the book talks about the lack of urgency leading to inaction for the past thirty years it never delivers a human connection to the sense of urgency to justify drastic action now.

Overall if you are interested in the subject matter then it’s probably a good read as the negotiations and political discussions felt quite genuine but the story never really convinced me overall.

Good pace, and always interesting, even the long-winded presidential discussions of possible courses of action.

Starts from the extraordinarily unlike premise of an honourable and quite clever politician, allowed to become a party leader, and then to become a president, without having made any shady commitments to the real power-base (wealthy industrialists and investors).

It then explores how even such a paragon can be buffeted by extreme negative consequences of the destabilisation (necessary?), in the quest to save the planet from certain destruction, being created by international political systems.