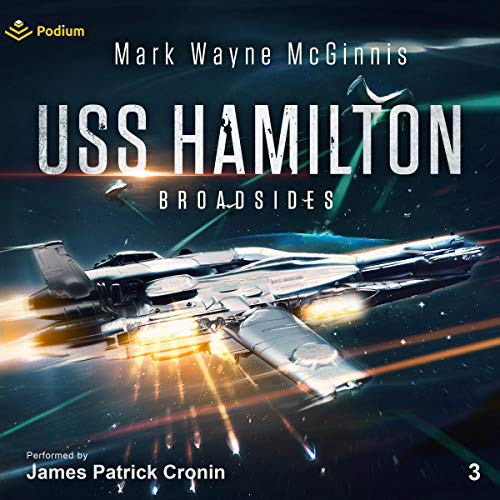 Hold tight...things are about to get bumpy.

For Quintos, telling Shawlee “no” was never an option. Unfortunately, according to the admiral, this very well could be a mission of no return. The war with the Grish has turned desperate, and the Alliance is tallying far more losses than wins. To complicate matters, all other US Space-Navy warship assets have been deployed to various hot spots within the quadrant. As for the mission, Fleet Commander Twinwon and his crew are on the run from a fleet of 18 Grish Warships somewhere out within the farthest reaches of frontier space. The Empress knows she has no right to ask, but she has no one else to turn to - she needs Quintos and the USS Hamilton’s crew - and she needs them now. Sure, this rescue may be coming too late, but no one ever said being a hero was easy.

First problem: How the hell will Quintos escape from a Norfolk high-security detention facility?

Such Potential But Falls Short

Also the Captain “runs “to the teleporters room and finds out they bad guys are on another deck instead of using transporter to get there fast he walks….. (instead of beaming them in to space). They can transport anyone/ anything anywhere… so transports unarmed fighters in to one enemy ship, because an armed Nuke would be too simple. Sends over “poison” to the whole enemy fleet again proving they can transport anything anywhere and does not use Nukes which he makes a point of saying “Keep 50”. So so disappointed, I really hope they next book is better written or at least has competent beta readers.

Sorry overly negative but the book really bugged me with the plot holes so big you could fly a dreadnought through them.

As for all the USS Hamilton books I simply struggle to tear loose once I have started listening! Love this series, it will be a long wait for the next one...

Yes let's have highly intelligent characters spew ridiculous nonsense to further pointless plot dead ends and character tension. In short by chapter 23 I wanted 2x my money back and few million more for brain damage. Oh how about a 15 year old randy boy fantasy...IN THE MIDDLE OF (once again his ship being shredded for no reasson) life or death struggle. This author had a stroke or is a master at antagonizing the reader. I have a few demonic fantasies of my own involving this author.
But wait there's more assaults on the reader's intelligence. same plot device as last time, oooh, ship's AI is taken over. can you say LAZY? The 1st thing of this book was new transporter tech that can duplicate what it transports. ( people and materials.) and yet... their ship is understaffed and being over run. This because no one thinks to have an indestructible war bot... that can be cloned 1,000 times in minutes. How about transporting the war bot to the enemy's ship's, or an Anti mater bomb?
Poor basic plot logic. ridiculous character interplay that just makes you fantasize about brass knuckles and a sound proof room.
In a dictatorship this author would meet a horrific fate... that would be way to nice.

Idiot decisions made for Plot.

I will Preface this with a potential spoiler warning.

the first half of the book was great! as the previous two books were. But then it immediately spiraled into sheer idiocy for the sake of plot advancement. There were massive GLARING plot holes and decisions that made no sense. I spent the last HALF of the book all but screaming. YOU.. HAVE.. A.. TELEPORTER! TELEPORT STUFF."

They never took advantage of some of the simplest to come up with ideas. then in the last Third of the book all I could say was "USE THE DAMN BROADSIDES." Of course no plausible reason was ever given for why that level of Frustration was nessecary.

This was an extreamly frustrating read, and I think the Author needs to assess the fact they used Stupidity as plot advancement. There was never a point in this book where the solution wasn't readily available at all times, and it was still never used.

This series I've listened to is one of the best, the reality of the scenes and action are unparallel. It works be a wonderful series to watch on Netflix, Prime, Hulu or many of these other streaming avenues. Looking forward to the next book.

I really enjoy listening to this series and I wonder if there will be another one.

I got a kick out of this.

hate being nit pickey... but just throwing something out there, to the author maybe?

anyways,sometbing that bothered me mid way thru the book, if u can precisely teliport anything as in, lipstick a helment, even people to and from an enemy ship... why send your soldiers at all ? why not send a dozen of those "smart missles " into the enemy ship? -boom call it a day
or, 1 more idea, once an enemy is identified, why not just start beaming all of the COs of the bridge, drop them in space and just fly away? lol Just me thinking out loud. but regardless, great read.

Run away before you get to the Dungeons & Dragons

Run away before you get to the Dungeons & Dragons holo-deck storyline in the next book. Did someone replace the author and not tell us? Was such an awesome series, I returned it. Puke.

for readers with no imagination.

where to begin? you have transporter tech, but you can't think to use it to transport bombs into the fleet of ships, but you can transport lemon juice? you have a holographic device that clips on to your belt that produces 3 hand to hand combat personas that can kill, but you only use it for training, unless your a ship captain. so many issues like this. you have a transporter, but you can't tanspoort a dozen captives out of 18th style century log cabin? uhg! I'm dumber for having listening to this series.

build me up to let me down

The overall concept still excited me but there were some very big story flaws that almost pushed me away. the biggest being the actions and attitude taken during the landing party chapters. since when does a train military doctor want to go for a swim on an alien planet while on a rescue mission? the military/tactics could of been better. it almost seemed the author did not do any military research. After the first two books I believed I had a good understanding of the personalities. with that being said the adjustments in this book really confused me. lastly the climax of the book, which is the end of the book. the closing of so many points of the story in the epilog was crazy. more explanation is needed. I'm not sure how the next book goes but if it is written as poorly as this one, my Hamilton adventure will be over.

A mostly enjoyable listen, but somewhat shaky in the details and implausable at times. Still, a fun story.