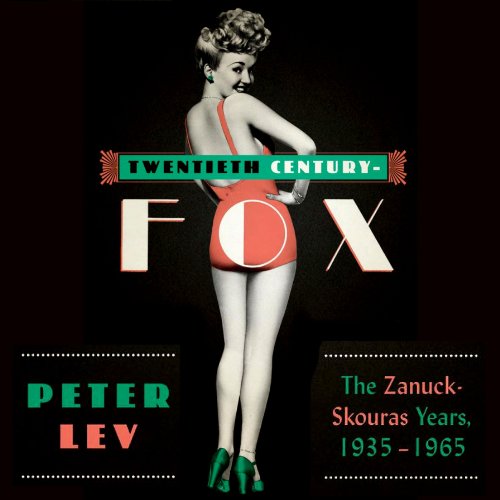 When the Fox Film Corporation merged with Twentieth Century Pictures in 1935, the company posed little threat to industry juggernauts such as Paramount and MGM. In the years that followed however, guided by executives Darryl F. Zanuck and Spyros Skouras, it soon emerged as one of the most important studios. Though working from separate offices in New York and Los Angeles and often of two different minds, the two men navigated Twentieth Century-Fox through the trials of the World War II boom, the birth of television, the Hollywood Blacklist, and more to an era of exceptional success, which included what was then the highest grossing movie of all time, The Sound of Music.

Twentieth Century-Fox is a comprehensive examination of the studio's transformation during the Zanuck-Skouras era. Instead of limiting his scope to the Hollywood production studio, Lev also delves into the corporate strategies, distribution models, government relations, and technological innovations that were the responsibilities of the New York headquarters. Moving chronologically, he examines the corporate history before analyzing individual films produced by Twentieth Century-Fox during that period. Drawn largely from original archival research, Twentieth Century-Fox offers not only enlightening analyses and new insights into the films and the history of the company, but also affords the listener a unique perspective from which to view the evolution of the entire film industry.

“This is a terrific book-wide-ranging, informative, and accessible-that brings together a group of subjects and strengths that are rarely joined in film studies... Film scholars will find that Lev consistently engages earlier work on the studio without duplicating it; nonspecialists approaching the subject for the first time will find Lev an accessible and reliable guide.” (Thomas Leitch, Professor of English, University of Delaware; author of Film Adaptation and Its Discontents: From Gone With the Wind to The Passion of the Christ)

I was looking forward to this book, but the narrator couldn't pronounce ordinary names or words. He mispronounced very famous movie stars that anyone with even the most basic knowledge of the subject would know. It was very distracting and made it difficult to follow at times.

The historical information on the movie industry.

Could you see Twentieth Century-Fox being made into a movie or a TV series? Who should the stars be?

Yes. I have no idea who should star.

What did you love best about Twentieth Century-Fox?

I'm loving the book itself, but the narrator is mispronouncing words and names all over the place. It's quite embarrassing, really. You'd think a professional would check up on how to pronounce things. Not here, apparently. I wouldn't let that keep you from buying the audio book, but just be prepared for Martin's mispronunciations.

The narration at times sound 'non-human'. And clearly knows nothing of film or politics. He mispronounced several famous actors names and mispronounced Khrushchev badly.

The book itself was fascinating in some areas but over all I found it lacking a coherent narrative.