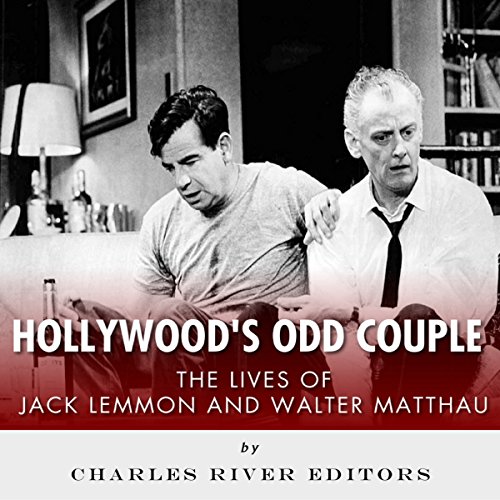 By: Charles River Editors
Narrated by: Allison McKay
Try for £0.00

"Every actor looks all his life for a part that will combine his talents with his personality.... The Odd Couple was mine. That was the plutonium I needed. It all started happening after that." (Walter Matthau)

Walter Matthau and Jack Lemmon are probably best remembered for their films together, but both were clearly established actors in Hollywood by the time they appeared in their first film together. The great film director Billy Wilder once noted of Jack Lemmon that Lemmon "was my everyman", and Lemmon did indeed represent a great everyman to American audiences during the latter half of the 20th century. For rich, poor, and working-class audiences alike, Lemmon was an accessible leading male, someone certainly less stately than Cary Grant or Laurence Olivier and seemingly more approachable even than archetypal leading men such as Jimmy Stewart or Henry Fonda. Viewers may not have known Lemmon on a personal level, yet his easygoing demeanor made it easy for the American public to feel as if they knew him. His wide appeal is summarized nicely by Richard T. Stanley, who noted that he "had the personality and versatile talent to star in any era", and Lemmon became intimately associated with other famous figures of Hollywood, including Billy Wilder and Matthau.

Before his movies with Lemmon, Matthau most often played shady criminals in dramatic films, and his character in Elia Kazan's A Face in the Crowd (1957) offers one of the best examples. Matthau's major breakthrough did not occur until 1965, when he starred in the stage production of The Odd Couple, which was later adapted into the film.

What listeners say about Hollywood's Odd Couple: The Lives of Jack Lemmon and Walter Matthau