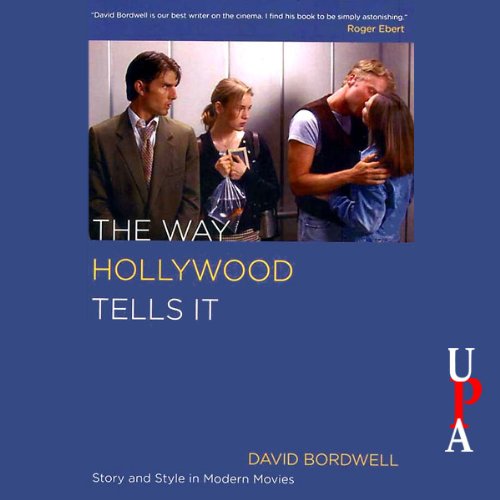 The Way Hollywood Tells It

The Way Hollywood Tells It

Hollywood moviemaking is one of the constants of American life, but how much has it changed since the glory days of the big studios? David Bordwell argues that the principles of visual storytelling created in the studio era are alive and well, even in today's bloated blockbusters.

American filmmakers have created a durable tradition - one that we should not be ashamed to call artistic, and one that survives in both mainstream entertainment and niche-marketed indie cinema. Bordwell traces the continuity of this tradition in a wide array of films made since 1960, from romantic comedies like Jerry Maguire and Love Actually to more imposing efforts like A Beautiful Mind. He also draws upon testimony from writers, directors, and editors who are acutely conscious of employing proven principles of plot and visual style. Within the limits of the "classical" approach, innovation can flourish. Bordwell examines how imaginative filmmakers have pushed the premises of the system in films such as JFK, Memento, and Magnolia. He discusses generational, technological, and economic factors leading to stability and change in Hollywood cinema and includes close analyses of selected shots and sequences.

As it ranges across four decades, examining classics like American Graffiti and The Godfather, as well as recent success like The Lord of the Rings: The Two Towers, this book provides a vivid and engaging interpretation of how Hollywood moviemakers have created a vigorous, resourceful tradition of cinematic storytelling that continues to engage audiences around the world.

This book is published by University of California Press.

"David Bordwell is our best writer on the cinema. He is deeply informed about films, he loves them, and he writes about them with a clarity and perception that makes the prose itself a joy to read. Because he sees movies so freshly and deeply he isn't decieved by the usual categories and finds excellence and experiment in unexpected places. For him it's no simple matter of the mainstream vs. the indies. By showing, often in shot-by-shot detail, how films communicate through style as much as subject and story, his book is liberating, allowing us to see precisely what films are doing, and why. I find David Bordwell's book to be simply astonishing." (Roger Ebert)
"Careful, concise, yet bold in its sweep and imagination, this is one of the most important recent books in cinema studies. It should be embraced by everyone who loves the cinema." ( Choice)

Certainly worth a read whether or not you agree with Bordwell's cognitivist stance. A well researched book containing excellent thought and good references and examples.

A well-rounded analysis of story, then and now.

David Bordwell brings to the surface two very valuable aspects throughout the course of his analysis of storytelling in films, both past and present (among many other storytelling techniques). 1. A breakdown of the other books on screenwriting and structure, the good, the bad, the valuable. 2. A breakdown of both great movies and bad movies and WHY, in the context of the time period and conditions they were made and the approach of the writers.
Bordwell sites an impressive number of films to accompany his academic analysis of story AND how (the directors, too) tell their stories.

a must for lovers of movies

David Bordwell is a master of the cinema. In this audiobook, he painstakingly provides the evidence for the faster pace of movies today. His insights are far reaching and must be taken into consideration, if one is to truly understand the impact of one of the most influential forms of entertainment.