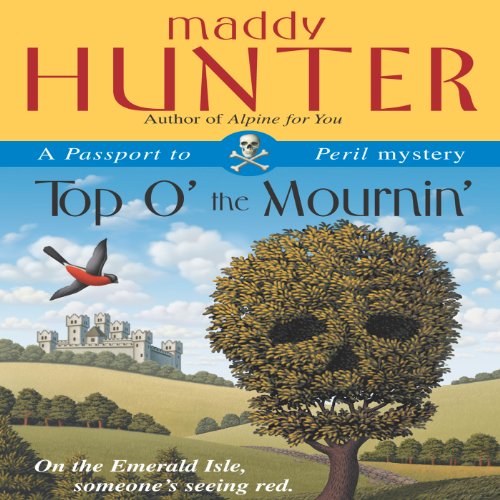 When Irish eyes are lyin'...

Emily Andrew is earning some much-needed green by navigating the twisting roads of Ireland with a group of seniors, including her beloved Nana. But once the hearty troupe from Iowa lands on Irish sod, trouble starts brewing: there's a death-defying incident with a horse-drawn carriage...and a gender-bending encounter with Emily's ex-husband, Jack, now known as Jackie. No wonder Emily has come down with a smarting case of hives! The plot thickens like Irish stew when the group settles into Ballybantry Castle, where a ghost is said to wander the halls. But it's no blarney when a very real corpse turns up in one of the guest rooms. While the murderous malarkey has Emily step-dancing as fast as she can, one sure thing emerges from the mists: Not even St. Paddy himself could drive out the spiteful serpent that slithers among them!

Easy Plot-figured out at beginning

Would you try another book from Maddy Hunter and/or Kathleen McInearny?

I have the person responsible for the crime figured out day one at the castle. There was way too much politically correct content - in your face.

Did Kathleen McInearny do a good job differentiating all the characters? How?

The autdio was good - one of the main reasons listened to the end of the book.

Second in the series

This is the second book in the series. I enjoyed it and thought it was funny. It was a bit like the first one. I will probably like the third one.

A fun book but with too much sexual innuendo

In <strong>Top O' the Mournin'</strong> by Maddy Hunter, Emily Andrew is leading a senior citizen tour group from Iowa to Ireland with her nana also on the tour. Upon arriving, Emily gets in the elevator to go to her room and is joined by a striking woman from the New York group. The woman soon recognizes Emily and introduces herself as Jack, now Jackie, Emily's ex- husband who has now become a woman and is on her honeymoon. After this surprising development, Emily goes to her room, where she opens the door to a knock to Etienne Miceli, the detective from her trip to Switzerland with whom she has fallen in love but not seen in eight months. They start to get ready to make love for the first time ever, her first time having sex since her annulment with Jack. And then comes another knock on the door. And another. And yet another. Her nana has gone to her room and found some things unsatisfactory, including the dead woman lying on the floor.

From here, Emily deals with a wild trip, with demanding tourists and constant attempts to have sex with Etienne that get foiled every time. And she also has to deal with trying to locate a potential murderer.

The characters in this book are vivid and enjoyable. We appreciate the person of Emily as she takes her tour. She has to deal with her transvestite ex-husband, who keeps turning to her for advice about her new husband, including which lingerie to wear on their wedding night. Jackie is the most flamboyant of the characters and rather endearing as she tries to be girlfriend buddies with Emily, including having a girl sleepover. Nana is a lot of fun as she takes everything in her own form of stride, showing her polaroid pictures of calamities with her typical aplomb.

I found the frequent talk of sex to get bothersome. I got tired of hearing about all of Emily's frustrations with trying to have sex with Etienne and being thwarted. This is often talked about as a cozy mystery, but all the talk of sex and sexual innuendos makes the book less than cozy.

One minor detail that got a little annoying was that the character of Ashley, from Georgia, keeps using the word "y'all" to refer to a single person. However, as the word is used by people from the South, it is plural, not singular, as it is used in this book.

Kathleen McInerney performs the audio edition of this book. She sounds very much as I might imagine Emily would sound, happily excited at times she is with Etienne but overwhelmed when things go crazy. The voice of Etienne sounds nicely seductive as an Italian lover. However, I didn't find the Irish accents very believable. But since we don't hear Irish very often, it isn't a serious distraction. Overall, I appreciated the performance.

I enjoyed listening to <strong>Top O' the Mournin'</strong>. The plot was interesting and filled with humor. The characters also delighted cleverly. But I really got annoyed at all the talk of sex and frequent innuendos. Thus, while I enjoyed the details that didn't involve sex, I have no plans to listen to further books in the series. I give this book three stars.