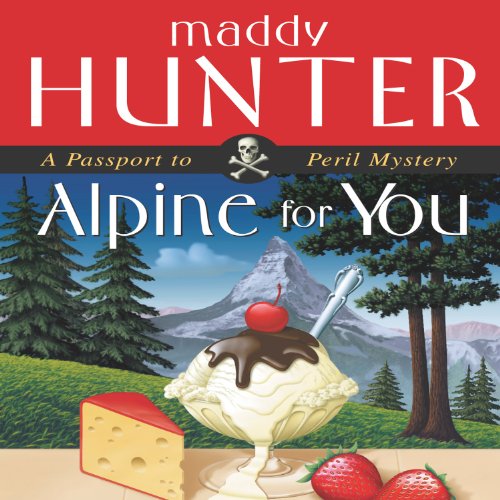 By: Maddy Hunter
Narrated by: Kathleen McInerney
Try for £0.00

A trip to die for….
Accompanying her grandmother on a seniors tour of Switzerland, Emily Andrew had envisioned a vacation straight out of a travel brochure: spectacular scenery, great food, and a classy European hotel, all worlds away from her rural Iowa hometown. But her dream trip quickly snowballs into mayhem when smooth-talking tour escort Andy Simon is found dead. To be sure, Andy was as randy as a mountain goat on Viagra, hitting on every miss - Swiss or otherwise - within striking distance. His constant advances were driving Emily cuckoo - but had someone orchestrated his untimely death?

For savvy, resourceful Emily, leading the tour in Andy's place is only natural. But she can't remain neutral when a fellow traveler takes a fatal plunge - she's convinced a murderer lurks among them. With precision timing, sexy Etienne Miceli steps in to investigate, and Emily warms to the suave detective. Still, with the group roster suddenly sprouting more holes than the local cheese, Emily wonders: is there a safe haven anywhere in the shadow of the Alps?

What listeners say about Alpine for You

A very good beginning to a new series

This is the first book in the Passport to Peril Mysteries. Emily Andrew is on vacation with her grandmother in Switzerland. Everything that can go wrong does and Emily faces each problem head on. The story is entertaining and fun. I will buy the next in the series.

Wonderful introduction to the series!

This is a great road trip audiobook. Very engaging and the characters antic, especially the Grandmother, will make you laugh.

Giving up at Chapter 4

I got this before a trip to Switzerland, as one of the few romances on Audible set there. But the main character is so inane that I'm giving up and returning this book. Can't make it past chapter 4.

While listening to the first two chapters I often found myself laughing out loud. After that I laughed less and less. By chapter 7 I quit reading. The characters and the mystery weren't enough to keep me interested.

Narrator Kathleen McInerney does a good job. I just lost interest in what she was reading.

If you don't like broad humor and ditzy characters you may not enjoy this book.

I really enjoyed this start to the series and had to laugh out loud at some places. But honestly, sometimes I thought is was quite rude, how Mrs. Hunter put down the swiss. I wonder, if she will do this to the other nations this series. I guess you just have to enjoy the funny story, but don't rely on the authencity of the characters and places.

In <strong>Alpine for You</ strong> by Maddy Hunter, Emily Andrew travels to Switzerland with her grandmother' senior citizen group from Iowa. When they arrive, Emily is unhappy to learn that she has been assigned to room with Andrew Simon, the lecherous escort for the group. It takes a while for the hotel to sort things out, so by the time Emily gets to the dining room for dinner, scheduled for 6:00, it is 6:04, incurring the scorn of all the Iowans, who consider anything after half an hour early to be late. What is worse, her nana is seated at a table with no room for Emily, and the only seat left is with the most annoying members of the tour, and worst of all, she gets stuck sitting next Andy Simon. And they will be expected to sit at the same table the whole time in Lucerne.

That same night, Emily wakes up to hear noises in the room next to hers and Nana's, and she assumes Andy has found a woman to seduce. But early the next morning, the pair hear screams and rush into the hallway to find that a woman who has gone to his room for an assignation has found Andy dead. The police get called in, since this is an unexplained death, so Emily meets the detective, Etienne Miceli, with whom she develops a strong attraction.

It doesn't take long before the medical examiner discovers that Andy has been poisoned with dimethyl sulfate, but even though Andy was a creep, no one knows who would possibly have hated him enough to kill him. The tour continues, and they visit a mountain with a church on top. Shirley Pengowski, a member of the Rhode Island contingent of the tour, who is the only decent person to sit at the same table as Emily, goes off to take her own photographs, but a little later Emily finds Shirley dead on a crag after she fell (was pushed?). Is this another murder? And don't murders come in threes?

I really enjoyed listening to <strong>Alpine for You</strong>, which gave a fun flavor of Switzerland, but especially of the adventures traveling in a foreign country with different customs, food, and equipment. For example, the hotel loses Emily's luggage, forcing her to wear her nana's clothing. Her nana also messes with an unfamiliar valve on the shower that causes Emily to get soaked in her cashmere sweater and leather skirt. As someone who has traveled internationally and has my own stories of crazy situations, I really connected with the traveling adventures.

In addition to the fun travel stories and the interesting places where Emily visits in Switzerland and Germany briefly, the murder plot goes creatively and cleverly. The twists and turns in the plot took us on a fun journey of mystery, just as Emily goes on a wild journey in Switzerland. I was surprised by the final solution, which was not kept hidden from us, but which I did not expect.

The characters in <strong>Alpine forYou</strong> were of interest. The main ones, especially Emily, who narrates the book, and her nana, have round features. Emily comes across as a very relatable person, and we cringe with her in the midst of her unlucky situations.

I did find that this book had more bad language and sexual innuendos than many readers of cozy mysteries would be comfortable with. Not only does it use the "S" word periodically throughout, but it also has some crude jokes, especially related to the trio of friends, all named Dick. This lends itself to a number of sexual jokes involving the sexual connotation for "dick." Further, Emily has some fantasies about getting naked with Etienne and talks somewhat dirty with him on a couple occasions.

Kathleen Mcinerney performs the audio version of this book. As the character of Emily, she brings the book to life in adding much fun flavor to the already creative book. She uses a lot of strong expressions in her showing excitement, fear, or frustration over Emily's various experiences. I really appreciated the quality of the performance of this book.

I have periodically come across recommendations to read Maddy Hunter's books, but it took a while for me to get around to listening to <strong>Alpine for You</strong>. This first book in the series turned out to be a lot of fun, and I can understand why Hunter has some major devotees. I have even encountered people whose bucket list involves visiting the locations of each of the series' books. The books all take place in different locations, as Emily works as an escort on tour groups. I appreciated this first book in the series and rate it five stars.