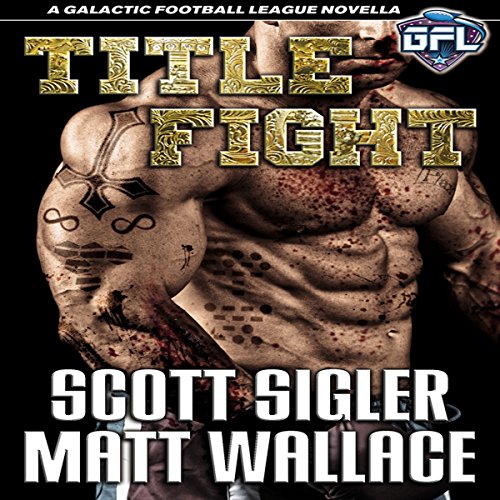 Undefeated galactic heavyweight champion Korak the Cutter has defeated all challengers, destroying everyone in his path, but the wins aren't as easy as they used to be. After a decade of perfect fighting, his age is catching up with him. For a Quyth Warrior, that means he's slowing down, and speed is the name of the game in mixed martial arts.

At this late stage in his career, he faces a nightmare - savage and unpredictable Chiyal "The Heretic" North. As crime lords and promoters try to fix the fight, and as managers cling to dreams of lost glory, Korak and Chiyal must find their way into the octagon to decide once and for all who is the greatest of all time.

What listeners say about Title Fight

I loved it, I am a GFL fan and this book just adds to it's greatness!🤗

the GFL universe is a really fun environment....

the GFL universe is a really fun environment....full of great stories.! #goodread # # #

This is perhaps one of my favorite Sigler short stories, and one of my favorite stories from his GFL series.
One thing to note about Siglers GFL ( Galactic football league ) series is that its not really about the football - tho you definitely can feel Siglers passion for the sport. As it really reads more like a futuristic Crime novel, with a galactic space opera back drop and incredibly interesting characters.
Now take that formula and apply it to Combat sports, turn the volume up to eleven and you go from rock'n'roll to pure HEAVY METAL.
I desperately want to see more of this aspect in the siglerverse with a follow up to this novella, a boy can only dream.
This book is pure fun and more than worth the short amount of time it takes to read or listen to.

Just Sad I didn't realize how short the story was, would of liked it in a pack of 2.

Scott Sigler and Matt Wallace delivered a knock out story! The GFL series is without a doubt one of the best out there.

Sigler is the man. just as exciting as all the other GFL books. Although, I really hate the word "Shucking", just make the book rated M and say "Fucking"

This is a worthwhile and entertaining read, well written and well read. Very much in line with Sigler's other works. I would recommend following the series in the order shown here on Amazon.

Some small issues with the sequence of the recorded storyline. Looking forward to Alive though. Can't wait for another awesome book by Scott.

only bother if you enjoy fights.

I loved the GFL and tore though them all in a month. So i figure I had to get any that are associated with it. The Reporter is excellent. Although I wish I had known that it tied in with the GFL All Pro book when I was listening to it.
This book really doesn't have anything to do with the GFL other then a couple characters. I don't watch MMA and couldn't possibly care less about it. So I really never got into this book.

Matt Wallace contributes his talents to the Siglerverse in this entertaining novella about UFC cage fighting. I always love discovering more about Scott's world, but of the four existing novellas, this is my least favorite. If you're curious about the tech-mods of biological species, this is the book for you. That angle never particularly appealed to me, but I did find the explanation of the Kreterakian empire's thought processes fascinating.