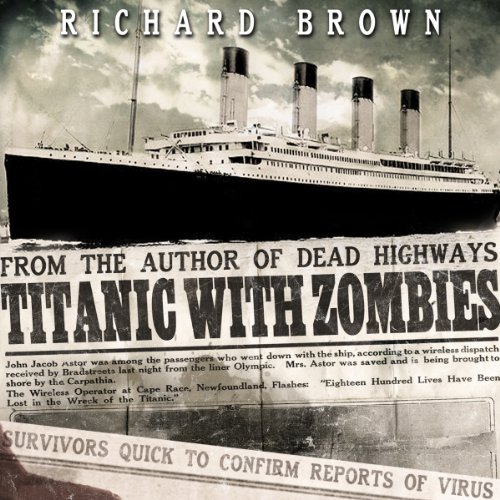 By: Richard Brown
Narrated by: Simon Whistler
Try for £0.00

A mysterious infection turns hundreds of passengers into violent, flesh-eating zombies, sinking the maiden voyage of the Titanic. Forget everything you thought you knew about the famous disaster. This is the zombie apocalypse...at sea.

All aboard. It's about to go down!

What listeners say about Titanic with ZOMBIES

ok if you can ignore the terrible accents

Ok story for a credit if you can get past the TERRIBLE accents!!

I think the narrator must have offered mates rates or been somebody's brother because how anybody could have thought his Irish accent sounded realistic is beyond me!

Same goes for the American. In my opinion it did spoil what was otherwise a decent story At-all At-all I'll be having a pint of Guinness with me terrible fake Irish accent if you please there !

What made the experience of listening to Titanic with ZOMBIES the most enjoyable?

Nice little story if you like the RMS Titanic and zombies. Like most zombie culture films/books don't expect too much detail in the plot but it kept me entertained while working. Good story, well read and i had a chuckle at some of the accents put on. If your a zombie nut like me then this book is a good one. The majority of zombie books end up much the same but this one is a fresh take in them. Well done. Worth a credit.

It wasn't the same old zombies random break out survive in a city of the dead. This took zombies into a tale i was already well educated about and didn't force its way in and make a hash of the whole thing.

Which character – as performed by Simon Whistler – was your favourite?

To be honest i liked all the characters. The accents were a some times a bit wishy washy but there was some heroism and there was also the rotting horde. what more could you ask for.

There was some plot holes that i would have liked to see filled that i will not put here because of "spoilers" but i can still sleep at night without worrying about it.

Interesting to listen to being that Titanic.......

Is my favorite book of all times. It serve it's purpose of zombies on board the Titanic.