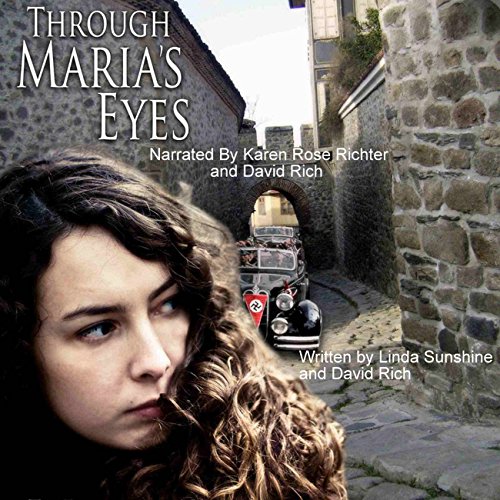 Through Maria's Eyes is the based on the true fascinating story of how one Jewish woman was able to survive and indeed triumph during the darkest days of the Hungarian Holocaust. Born and raised in Budapest, Hungary, Gizella Kornfield was the daughter of a prominent rabbi and engaged to be married to the handsome and wealthy man of her dreams. Then, her world collapsed overnight when, one day in March, 1944, her beautiful European city was invaded by the Nazis whose sole purpose was to eradicate as many Jews as possible before the war ended. Caught in the crossfire and terrified for the lives of her family, as well as herself, Gizella assumed a false Christian identity and obtained employment as a maid in the home of an anti-Semitic family. This book is the story of how this extraordinarily courageous and resourceful woman was able to eventually save most of her family and herself through her indomitable spirit, with her quick wit and some amazing good luck. We never know what we are made of until we are tested in times of crisis, which is exactly what makes this semi-biographical story so compelling and profound. Here is a book that celebrates the triumph of the human spirit over perhaps the deadliest evil of the 20th century.

What listeners say about Through Maria's Eyes

wow! what an amazing women! a MUST read!

I don't know how to describe this book. It's heart wrenching and suspenseful. Listening to what Gizzy AKA Maria's had to indoor, what her and her family had went through being Jewish back in the 1940s is just so much. I have seen a lot of documentaries on this area. But never have I heard an account like this in such detail.
its just so much for one person to bear. I am not sure how she did it. this woman is a hero. the horror she must of felt. The pain she must've went though. It's just heartbreaking. The storyline of this is excellent. If it wasn't a true account it would be an amazing story to listen to still. but it is a true account and because of that I believe this story will be one of those stories that we'll stick with you forever.
Every time something happens bad, and something i do think would be able to deal with, she just picks her head up and goes on to the next day. I just want to give her a hug. I have learned so much from her in the short time I listened this book. In my eyes she is a hero one I hope the world does not forget. this book must of been so painful for her to write but I'm so glad she did! and shared her story with the world!
RIP Gizzy, and Heidi your story was heard.

I was gratefully provided this audiobook at no charge by the author, publisher and/or narrator for an unbiased review via Audio Boom.. but it is VERY worth the buy.

This is a son's BERNIE memoir of his mother's survival in hiding in Budapest during the war. It's personal, and therefore narrow. That's not bad, it's simply the style. A decent story, but could have benefited from a better narrator. Very stilted delivery but a rather pleasant voice. This book was provided free of charge by audio book boom dot com in exchange for my honest review.

Eye-Opening and Fascinating Through Maria's Eyes

If you could sum up Through Maria's Eyes in three words, what would they be?

Maria and her ability to overcome tragic adversity.

What about Karen Rose Richter and David Rich ’s performance did you like?

The voices were strong and captured the essence of the book nicely.

A personal view of a horrific time in history

What did you love best about Through Maria's Eyes?

The personal account that we get is very believable and relatable. The author does a good job of making you feel real empathy for Maria and her family. Getting a real-life account for the Jewish people that had to endure this terrible time in history is captivating. A fair portion of biographies have parts that just don't seem to ring totally true. That is not the case with this book. In spite of the unbelievable circumstances that they encountered, it all, sadly enough, seems quite believable.

Have you listened to any of Karen Rose Richter and David Rich ’s other performances before? How does this one compare?

This is the first performance I have heard by Richter. She played the roles very well.

The personal tragedies and hardships that the family endured were all described in a very moving way. You cannot help but be moved by what they are put through. It is also quite compelling to watch as they persevere in the face of such anti-Semitism.

This audiobook was given by the author, publisher, or narrator at no cost in exchange for an unbiased review via AudioBook Boom.

Enjoying this book so far.

Would you listen to another book narrated by Karen Rose Richter and David Rich ?

Do you think Through Maria's Eyes needs a follow-up book? Why or why not?

Not sure yet; haven't finished listening.

This audiobook was given by the author, narrator, or publisher at no cost in exchange for an unbiased review via Audiobook Boom

haunting story of sorrow and triumph

What did you love best about Through Maria's Eyes?

How people survived in the midst of chaos & hatred.

Maria's strength and kindness in the midst of adversity was inspiring.

What about Karen Rose Richter and David Rich ’s performance did you like?

The cadence was to slow by Rose. David was fine.

When Maria discovered her father all beaten up.

Some of the horrors of war

Where does Through Maria's Eyes rank among all the audiobooks you’ve listened to so far?

Maria's Eyes ranks in the just okay. While I find this topic interesting others should too.


We should never forget.

I liked that it came for Maria's perspective. What a wonderful, and strong person she was.

Which character – as performed by Karen Rose Richter and David Rich – was your favorite?

Maria herself was my favorite character. Also, her christian friend who was helping so many Jews.

When she saves the children really moved me. How wonderful to save 3 lives.

Where does Through Maria's Eyes rank among all the audiobooks you’ve listened to so far?

It took me a while to get use to the narrator. Something about her voice grated and I think this may have been a book I would have enjoyed more as a paper book rather than a novel.

A difficult question to answer without spoilers.

I had a horrible time turning this one off.

This audiobook was given by the author, publisher, or narrator at no cost in exchange for an unbiased review via AudioBook Boom.