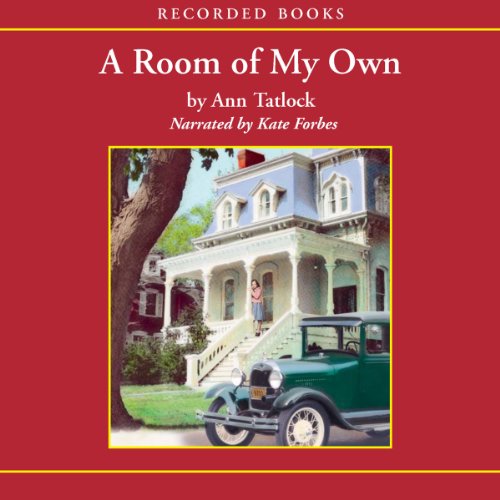 Room of My Own

Room of My Own

This charming, old-fashioned story of a girl growing up during the depression will convince you that anything is possible. Against a backdrop of authentic hardship and despair, 13-year-old Virginia Eade discovers the true source of happiness. A doctor's daughter, Virginia spends her days dreaming of romance with "the two Charlies" - Charles Lindburgh and Charlie Chaplin. Soon Virginia is forced to give up her room to less fortunate relatives, and failed banks, closed shops, and breadlines crop up in her insulated world. When her father asks her to accompany him as he provides much needed medical care in the notorious hobo village, Virginia's life is changed forever. The 1930s become poignantly real with the novel's wealth of period detail, providing a dramatic backdrop for a message of hope and compassion. Kate Forbes' narration of this best-selling inspirational novel is guaranteed to touch your heart. She so skillfully portrays Virginia and conveys the ambiance of the depression era that the result is truly magical.
©1998 Ann Tatlock (P)1999 Recorded Books, LLC

Most enjoyable and highly recommended...

Another enjoyable listen from Ann Tatlock. Ann has a wonderful gift of historical storytelling that brings to life the history of our parents and grandparents. In these days of economic trial, Ann reminds us how fortunate we are to be living in this wonderful country of wealth, prosperity and freedom. This thanks to our forefathers who endured the unthinkable and the blessings of God. We need to remember how fortunate we are and this book will do just that. "Room of My Own" is most enjoyable and highly recommended.

I never cease to be amazed at the horror and hatred that fellow human beings are able to feel towards one another . . . in the midst of one of the saddest, most devastating times in the history of our country, the Great Depression, it seems that it either brought out the BEST in people . . . or the worst . . . so when Ginny's aunt, uncle and their children come to live with them, after her uncle lost his job, Ginny had to give up her room . . . Ginny's family sacrificed, loved and demonstrated the BEST during the Great Depression. . . But when the WORST comes out and evil resides in those in power, those who are sworn to protect us, untold damage is done . . . Ann Tatlock always makes you think, when you read/listen to her books . . . I, for one, am not a fan of unions . . . but I believe that as Americans, we have the right to form unions, the right to fair wages, a right to safe work environments . . . and if it were not for unions, in the beginning, many factories would have had no incentive to give their employees fair pay or safe work conditions . . . I greatly enjoyed the story of relationship between Ginny's father and mother . . . her father, Dr. Eades, goes out to treat the homeless at Hobo Town, and her mother, worries every single time that he goes . . . and when her father, one day, says he is taking their daughter, Ginny, (thirteen years old) with him, she is beside herself . . . but off they go . . . thus begins the hard and glorious lessons of giving . . . and loving . . . in ways that Ginny never knew existed before . . . even when the danger escalated, Dr. Eades continued to go to Hobo Town, not only to treat their illnesses, but to sing and visit with the people there . . .and when Ginny asked him why, he said, it makes me happy. Those words stuck.

Wonderful historical story of living through the depression and people's faith in God. Very uplifting after seeing so many books with no moral values!

Interesting story about the depression

The narrator was pretty good overall, but she did mispronounce a couple of words. I enjoyed the story.

Ann does not disappoint

Ann is a masterful story-teller. The rich backdrop of the 30's is both charming and disturbing.
I'm new to audio books, but enjoyed the reading very much.

A Fresh View of the Depression Era

A great personal glimpse into the people and events of the Great Depression. Filled with emotion and triumph during these trying times.

Two Books In One Cover

Ann Tatlock is a very talented author and did a great job of capturing what might have been going through a teenager's head during such stressful times. Her style inspires me to want to research some of the events described. The challenging thing is that many of the descriptions and thoughts were extremely drawn out, and I found this to be exhausting. I have to say the the faith-based messages were inspiring. There were two major story-lines that could have stood alone. This story might have worked better as two separate books.

What made the experience of listening to Room of My Own the most enjoyable?

The story line vividly depicted the struggles and triumphs of the Great Depression. It helped me see it from a child's point of view... very enlightening

What other book might you compare Room of My Own to and why?

Many coming-of-age stories tackle issues of growing up in a world you don't understand; I couldn't compare this to one book

This book is not Ann Tatlock's best; perhaps it is the narration (I am not the biggest fan of Kate Forbes), but it is a good way to spend a few hours