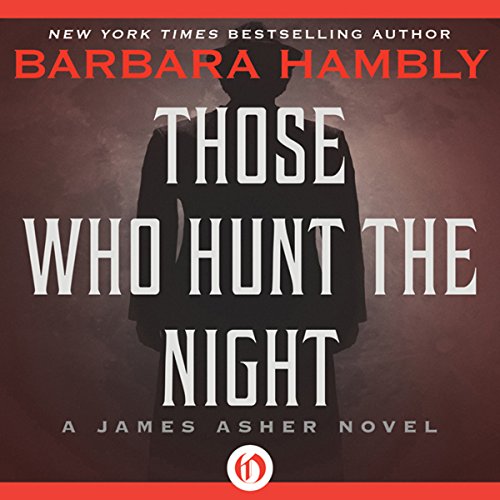 Those Who Hunt the Night

At the turn of the 20th century, a former spy is called into service to hunt down a vampire killer.

Once a spy for Queen Victoria, James Asher has fought for Britain on every continent, using his quick wits to protect the Empire at all costs. After years of grueling service, he marries and retires to a simple academic’s life at Oxford. But his peace is shattered one night with the arrival of a Spanish vampire named Don Simon. Don Simon can disappear into fog, move faster than the eye can see, and immobilize Asher - and his young bride - with a wave of his hand. Asher is at his mercy, and has no choice but to give his help.

Because someone is killing the vampires of London, and James Asher must find out who - before he becomes a victim himself.

What listeners say about Those Who Hunt the Night

You will find a number of well wrtten reviews about the story line in this series but I would like to give a "kudoes" to one of the skills Ms Hambly uses when she writes this series. She uses real facts, historical slang and accurate point of view for her various characters, an enhancement which is often overlooked by writers in this genre. Ms. Hambly has enhanced the James Asher Series with histoically realistic backgrounds and filled it with characters who act and speak with the words and habits from the times they were born into. For those of you familiar with the late Georgette Heyer's creations, you will know that her mysteries, fictions and romances were made far more interesting and exciting by her use of accurate hisorical facts, places and personalities to act as the foundations for her stories. Ms Hambly has succesfully done the same. Her writing style blends the character's unique habits and speech patterns so smoothly that the conversations and plot descriptions never become overwhelming or boring. The vampres in this series were born, lived and were turned over several hundred years. They come from different countries, economic and educational backgrounds, as well as having different reasons for being turnned. Ms Hambly uses these facts to make even the background characters more realistic and it brings the story to life in a way that makes the more cookie cutter styled books fall flat.

While I have continued to purchase the new books in the series as she publishes them, I hope she will allow the entire series to be released on audiobook. No computer read book can hold a candle to a professionally read book. Give me a reader who has done their homework on how to pronounce unusual words and takes time to bring each character to life with an unique and appropriate accented voice. I hope you enjoy this series as much as I have. Eyes and fingers crossed that she will continue to bring more stories of James, Lydia and Simon for us to read. Thank you Ms Hambly, for these wonderful stories.

This book is a perfect read for me. The vampires are old school scary, and our hero's are erudite and believable. (It reminded me of the first time I read "Interview with the Vampire." It's that good!) So I was very thrilled to find this series.

The story takes place around the turn of the century in London, with all the foggy atmospherics you'd expect. Horse drawn carriages still ply the cobbled streets, and rolling fog hides all manner of predators. From the streets and alleys of London to an old cemetery and the catacombs in Paris, the adventure starts with a bang and doesn't stop until the last page. I don't want to give anything away, so just trust me -- if you enjoyed Anne Rice, you'll love Barbara Hambly's John Asher series. It is so well written that I find myself having to shake off the creeps by listening to something else before bedtime, (and I'm a big girl who doesn't scare easily).

Gildart Jackson is perfection. I'd never listened to anything by him before, and I'm now a big fan. So much so that I've started the 2nd book, and can't wait for Audible to add the rest of the series. (Just as Laura Kinsale's books are greatly enhanced by the reading of Nicholas Boulton, I can't imagine John Asher being read by anyone but Gildart Jackson.)

I have to say something about Barbara Hambly. I don't know who this lady is, but she can write beautifully. Her command of language, world building and character creation is some of the best I've ever read. I know Anne Rice has received many accolades, but Barbara Hambly can write rings around Rice, and deserves a much wider audience.

Would you consider the audio edition of Those Who Hunt the Night to be better than the print version?

I read the book years ago and was most taken with Don Isidro, the vampire. I'm not a vampire lover in terms of books. However Don Isidro had some of the human characteristics he had in life such as honesty. He was, however a bit of a snob at times, having been born into Spanish aristicracy 300 or so years prior to the events in this book. I also like Professor James Asher even though he seemed to be a bit old for having been a spy. All in all, this was a good book. It kept my attention throughout.

I really enjoyed this book and I have already downloaded the 2nd offering. Great story and acting.

this is a great book, was there ever more that were written? I would love to read more.

I loved this book but it took seemingly forever even though pretty short compared to my other books. The characters are very dinamic, with a great plot twist at the end.

The voice actor takes a chapter or two to grow on you, but he's good overall.

I love this book! the story is great, the writing is rich and powerful and the narrator does a good job in 95% of the book! listen for yourself! ! I totally recommend it!

This was a refreshingly different take on the vampire mythology. While remaining true to past vampire stories, it was a very enjoyable novel set in early 20th century England. I like to picture the happenings in my mind like a movie, and this was a very good book to do that with. I look forward to reading other books by this author.