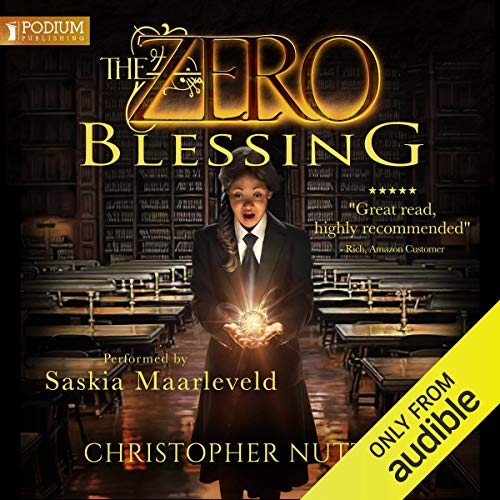 By: Christopher G. Nuttall
Narrated by: Saskia Maarleveld
Try for £0.00

Caitlyn Aguirre should have been a magician. Her family certainly expected her to be a magician. But by the time she reached her 12th birthday, Caitlyn hadn't even managed to cast a single spell! In desperation, her parents send her - and her magical sisters - to Jude's Sorcerous Academy, her last best chance to discover her powers.

But as she struggles to survive her classes without a single spell to her name, Caitlyn starts to uncover an ancient mystery that may prove the key to her true powers.... If she lives long enough to find it.

What listeners say about The Zero Blessing

I've been looking for a story in the same area as Harry Potter and this is it. It's brilliant. Saskia gives a superb performance and the story is so well thought out. Just bought book two.

narrator is really good and makes the book and audio quality is good.

I could be wrong but doesn't the main character have dark skin? why is the cover art showing a girl with light skin?

listening to the story unfold was. entertaining and relaxing .
the narrator kept the flavour of the story without making seem dull. Well done all I will be straight onto the next book.thank you.

Really enjoyed this as an adult, plenty of interesting rivalry and different approach to magical talents. I recommend it & couldn't put it down for the second half of the book.
I've just purchased book 2

good listen a bit repetitive on zero magic.
otherwise it kept me listening. I was sorry when it finished.

The story could be good, but.... Just in the first 3 chapters, all you hear, over and over and over. I can't do magic. So distracting after the 500th time. This girl needs to see a magical physiatrist.

In a world of Magic, One Girl has Zero

This is a world in which everyone has magic, every person can do some form of spell, from the full on Magic Users that create magical items and study magic full time, to cleaners who use simple spells to help them with their daily tasks. The world is kind of like an old world England, with villages, Lords etc, but prestige is not determined by Magical talent rather than sheer wealth.
The story starts with us being introduced to the Aquirre family, the Father is a powerful Mage, able to craft items of true power, and do other amazing feats of magic. His wife is a world renowned Potion Master, able to craft, brew and generate potions of amazing magical power like no other. In the Magical world, twins are a great gift, making a family extremely powerful, so when the Aquirre family are blessed with triplets, their power and place amongst the Elite is practically guaranteed for generations. That is, right up until Caitlyn, the 3rd of the triplets is found to be a Zero, someone with absolutely NO magical ability at all.
Her two sisters Alana and Bella of course have it, Alana is the standard precocious, horrendous, snobby person absolutely full of herself that you would expect in such a family. Bella is kind of lazy with her magic, knowing that she is the 2nd child.
There are going to be obvious comparisons to Harry Potter here, but this is much better. For starters, Caitlyn doesn’t have all the answers, she has to work for things, she isn't handed them, and Nuttall has actually written his story, rather than re-writing a lot of well-known mythology, and having a fairly predictable story.
Secondly, having the main character with no magic in an entire world of magic users is a lot of fun. Yes, I know, it has been done before (Such as Weis &amp; Hickman’s Darksword Trilogy for example), but this is a fantastically written story.
Nuttall has created a beautiful world for the characters to play in and this story to unfold, and it adds a sensational depth to the book. With the upper class magical element, and the peasantry all wrapped around magic through, rather than money, it creates a unique perspective of things. There are also references to this ancient ‘Empire’ that existed previously that fell, and how knowledge was lost, and those of today are trying to re-create some elements of the new world based on this old Empire. It adds an element of mystery, gives the story some extra depth, and allows Nuttall to add various storylines that provide his story with some actual substance.
The main character herself is brilliant, both for a younger audience (which to be honest, I think this book might be aimed at, but, we’re all big kids at heart), but this is also a great listen for anybody who likes a good fantasy story.
Caitlyn is obviously a troubled girl, struggling in a world where she is not only expected to have the gift of magic, but without it, she may well damage the reputation of her family. And even worse, without it, she becomes the target of everyone who sees her as easy prey. However, she is a wonderful role model as well, in a current real world full of news of bullying, Caitlyn shows that you can stand up for yourself, using your intelligence, courage, and your wits. Without giving too much away, she finds things to counter her ‘disability’ as such, making her creativity and intuitiveness part of the real fascination of this book as she has to deal with not just her sisters, but Judes school of Magic, a place where she should be eaten alive with no magical ability.
There are some other wonderful characters as well, Rose, the commoner who was lucky enough to get into the school and becomes Caitlyn’s friend, Caitlyn’s two sisters obviously, the twins of a rival family, as well as those of Caitlyn’s Dorm. All come together to make this an exceptional book. (I was going to write a ‘magical book’ but it I just couldn’t bring myself to do it…)
Whether you are new to Fantasy or Christopher Nuttall’s work, this is a great place to start.
As for the Narration Saskia Maarleveld has such a beautiful voice it is such a joy to listen to regardless of the story she is telling, so when she has material of this standard, it is a true blessing to get to listen to. Maarleveld captivates with a wonderful array of voices, both male and female, using her exquisite tones to bring life and magic to the characters so you can thoroughly enjoy Nuttall's wonderful story.
This is a perfect match of an outstanding Author and an Exceptional Narrator, and anything this pair does is going to be worth listening to.

Not my favorite from this author

I truly dislike to write a review of a book I just could not get into. Especially when its an author that I like in other of his books. His science fiction that I have read is good to great. But this fantasy just left me flat. I could not finish it. It did not grab my interest. The main character repeatedly tears herself down. I get she has issues to overcome, but how often do you have to repeat it until it is overkill. If you like s/f pickup his Ark Royal series, it is much better in my humble opinion.

Worth a credit, but does have some annoying flaws

The book has a nice story line, but it is long and drawn out. The writer has a tendency to repeat the same mantra every few paragraphs...after reaching 3/4 of the book, I just started to skip chapters. The events that occurred in the middle of the book had little impact on the ending...so, honestly, I think you could read the first 1/4 and then skip to the last quarter and not miss much of anything. It is for that reason that I dropped a couple stars.

The storyline itself is kinda interesting and you do want to see where things go. I also thought Maarleveld did a good job with the voices of the various characters. So, I can recommend this for using a credit, or maybe wait for a sale....but if you are scrapping by for credits or cash, hold off.

A New And Exciting Magical World

This is the 3rd different series by Nuttall featuring a magical society and a strong female lead. While it's not necessarily better than the other series, it is full of its own creativity and characters that make it distinct and in some ways more interesting. It has elements of Sanderson's Mistborn series, as well as Patrick Rothfuss' Kingkiller Chronicles. Good company, indeed.

The narration is first-rate, and I was pleasantly surprised that the book is less predictable than it appears at first. Sure there's a magical school, kids that can be cruel, and occasional duels, but if that's to your liking, you won't be disappointed with this book.

I honestly doubted I'd enjoy the book as much as I did. Chris has easily become my favorite author with this.

Great Story & Narrator! Often Forgot It Was YA

While the ages are pre-teen, the intelligence and invention that the lead character, even with the voice appropriately young, often allowed me to forget the age. The material is clean and appropriate for the age. The latter allowed the focus to be on the excellent story telling. The narrator, Ms. Maarleveld, is excellent, as always.

Felt Like I was a character in the book

This story kept me wanting more and more. The set-up was suspenseful. I love the story line. can't wait to start reading the next book.

I am a big fan of the very immersive and detailed Schooled in Magic series; though was not keen on the first Bookworm novel. However, this gem has usurped any favorite in the Schooled in Magic series. Simply splendid. Incredibly detailed magic world, and the writer very skillfully allows the reader to suspend their disbelief. This is quite the page turner! I had to alter my activities to finish it. I can hardly bear to wait to begin the next one, which I will do the instant I finish this review.

The only "drawback" is that Caitlyn, her sisters and Isabella all seem more like 16 years old, certainly not ten. However, that is a wonderful drawback as it made the book much more appealing and yet it will "last" much longer, her school years.

I just loved how this first installment wrapped up and the insight into her father was very well done. I am keenly interested in Caitlyn's well-being, that of her friend Rose, and care even about some of the teachers. Well-done!!

I love all the books hes put out so far can't wait for the next ones have already completed The complete bookworm series and just waiting on the next schooled in magic book to come out now hes got me hooked on this one too........ Keep them coming just a little faster would be great lol