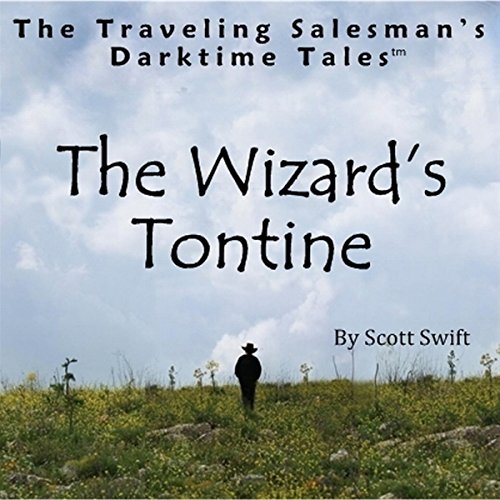 The most exciting adventure story yet! Every five years there is a gathering of magical beings to read the Wizard's Tontine - a contract of sorts which awards a massive prize of gold to the last living member. This time, however, witches aren't invited, and they want their revenge! They go to war against wizards and magicians in a battle which includes dragons, minotaurs, goblins, giant bats and magical creatures of every kind! Don't miss this must-read children's story!

What are the Traveling Salesman stories about?

Originating from the fantastical tales a father made up from thin air each night for his sons at bedtime, the Traveling Salesman is a mystical, magical wizard of sorts who uses his wits and wizardry to escape tight spots and help those in need. Traveling from town to town, he sells everyday items enchanted with magical properties. But beware! If the items are misused the consequences can be dire!

What makes these children's stories so unique is that the main character, the Salesman, is never given a name, nor is he described physically. In fact, none of the characters in the stories are given names!

The Salesman could be any shape or size (tall, short, etc.) or of any background...whatever the child imagines! This distinctive style of writing allows children to imagine the characters as anyone they want! Family members, people in their own communities or even classmates! A completely unique way of telling children's stories!

Each tale is a standalone story in its own right, but taken together they weave a rich and vibrant world inhabited by werewolves, witches, and magical creatures of every kind! You've never read stories like this before!

Meant for kids ages 10 and up, the stories are full of action and adventure, but without the intensity of more adult fare. Just as in real life, not every ending is happy, but through the salesman's adventures your children will learn the value of courage, loyalty and doing right.

To learn more about this story and others in the series, please visit: www.darktimetales.com