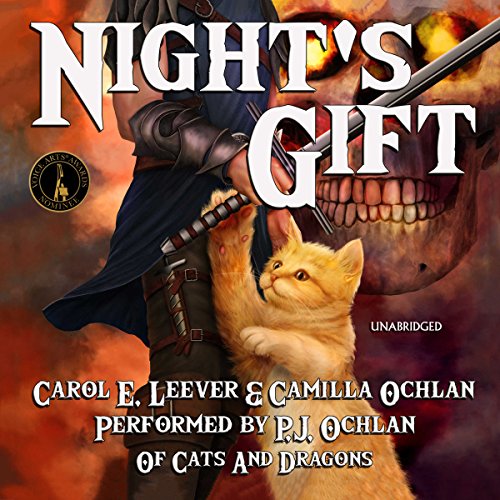 Young Omen Daenoth cannot control his deadly supernatural powers. The only thing keeping him from inadvertently destroying everyone and everything around him is a dragon-forged artifact. But when the item is stolen, Omen can either give up his freedom and admit he's a monster, or find a way to rein in his chaotic psionics.

Terrified his devastating power will kill an innocent, Omen enters into a shady deal with an undead alchemist and fights his way through the fabled, underground Night Games of the arcane city of Hex to retrieve what he has lost.

When he inadvertently frees a talking cat, his erratic powers may be the only weapon capable of protecting this new companion from savage creatures out for feline blood. Can Omen protect the cat and the people of Hex, or will he be forever lost to darkness?

What listeners say about Night's Gift

I got really nostalgic for my old AD&D Psionic Handbook after listening to this tale. It is a rare sort of fantasy that plays with mental abilities over magic. It is a rarer one that succeeds in this task, and brother, does Night's Gift do this in spades.

This book seems to have been made for a young adult audience, but I found myself enjoying it just as much. It sort of transcends age boundries. All I know is fun is fun, and a good story is a good story. This story starts off rocking and never slows down. It moves like a great anaconda cutting through the water, swift, relentless, and ready to strike at a moments notice. Omen is a powerful psionicist, who is unable to control his powers, and the one device that reigned in his abilities has been stolen. Thus begins his quest to retrieve the item, and leads to him finding a talking cat.

The story is fun, fast paced, and makes you want more, thankfully, there is a second book I will be getting ASAP. I enjoy the mental powers over magical powers aspect as well. As I said, it is rarely done and so I take it for what it is worth.

P. J. Ochlan narrates this book as if he were born to do so. He carefully crafts each character's voice, and when you are done listening you won't be able to imagine them any other way. He really does a fabulous job in bringing these characters to life.

This Story Deserves a *squee*

Night's Gift is filled with wonderful adenture, betrayal, magic, alchemy, dangerous challenges. It has almost everything, including teens getting into trouble that their parents definitely won't want to know about. Want to get grounded for life? Raid a giant's tomb.

Narrator P.J. Ochlan is an incredible talent. He does ALL the voices including high-toned royalty, common thief, voice cracking teen boys. He is amazing, and my newest favorite. (I have a list. 😉)

a fun and exciting fantasy novel for young adults

Omen has the power to move objects with his mind.  The problem is he can’t control it and often causes more problems than he solves.  Determined to get away from his controlling royal parents, he takes off into the city Hex.  His adventures start instantly as a thief steels his warding bracelet and the prince of Hex steps in just in time to save an old merchant from Omen’s uncontrolled powers.  Little do either know, this is just the beginning of a long night of deadly adventures.

The action is ceaseless as Omen and the prince track down the thief and his necromancer boss.  They only have to retrieve one special item for the rotting alchemist to give it back.  Of course, that one thing requires getting something else, which requires getting something else and so on.  Soon they find themselves fighting dead giants, a witch, a merman, evil bird things and a dozen other monsters all trying to kill them.

There is literally no break in the action, one adventure leading to the next.  It is fantasy fun as the two friends discover more about themselves and their growing trust in each other.  The youthful protagonists and the nature of the adventures makes this a great choice for young adults.  There is a lighthearted tone to the story that softens the violence enough to not keep kids up at night.  You know the friends will prevail in the end, just not how.

The story is performed by P. J. Ochlan, who is just brilliant.  His voice is smooth as silk and infinitely malleable to the many characters.  The lighthearted tone of the story comes through just right for the young adult listener, but enjoyable for adults as well.  The character voices are all easily differentiated and appropriate for each.  Certainly any listener’s favorite will be the cute, deadly kitten with a Scottish accent.  How fun is that?

This is a fun and exciting fantasy novel for young adults and adults alike who enjoy their fantasy lighthearted.  Though part of a series of unknown length, it wraps up completely, leaving only enough mystery to entice the listener for future adventures.  Recommended.

Fantasy setting: magic, swords, elves, ect. 2 noble teens go through town & every one hands out quests: go to site A, to get item B & that leads to C, D, E, ect. The problem is: story is very simple, predictable & reads like a softer D&D game. This book is ment for older kids or younger teens.
Some magic, fights & interesting character interplay. Nice amount of history & world building. No romance, sex or epic violence. Performance good with different voices & accents.

For an introduction of fantasy for young adults this isn't a bad option. The story is rather predictable and plays out like a game of D&D. It's enjoyable, but the main characters is sort of weak as they are sort of a Mary Jane power wise.

A bit slow to start as I kept waiting for the cat to appear. I'm a cat person, which is what attracted me to this story. The pace finally picked up and everything fell into place. I won't reiterate the story as it's been done in other reviews but, just know that it's a delightful experience.

I’ve seen this book on a lot of freebie promotions and downloaded it. Less than a few pages in, I didn’t want to stop reading for my lovely life-chosen work and chores. So I downloaded the audiobook.

There’s just something innocent yet ominous about making the best of a situation when you’re a teen and your parents make you do something you don’t want to.
Mischief and misadventures lead them to Hex where they have to continuously bargain for items for information or requested items to exchange for information or items. Did that make sense?
The world building and magic system was enjoyable and easy to learn. It unfolded without being sluggish or clogging the momentum.
I purred when Tormy was introduced and was yowling when they learned someone else wanted him!
I loved this book and I can’t wait to get to the next books in the series!
PJ was an incredible narrator who gave characters their own voices and his tempo flowed with the action.
Highly recommended for youth and the young at heart for an exciting fantasy!

Great listen! Reader is amazing ~ lots of voices different accents - puts layers on each of the characters. Storyline is creative and action packed.

it was an read

cant say I liked the ending but the fights werent half bad.
the plot was decent enough and the cat is cute

Loved it could not stop listening excellent narrater he made the book come alive. Very interesting characters.