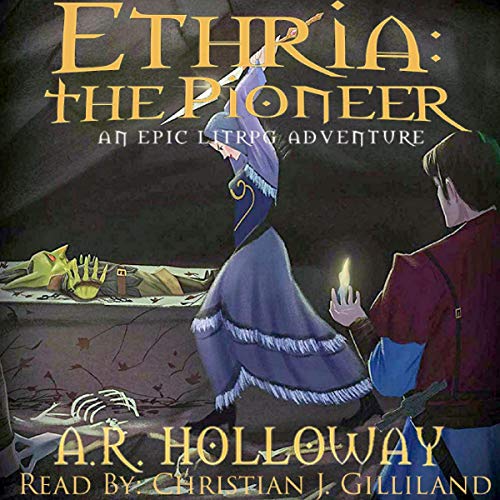 Offered a choice by powers far greater than himself between returning home at great risk, or entering a world named Ethria where he might find another, supposedly safer, path home, Daniel "Rayid" Tear will enter Ethria. A world that operates similar to the video games Daniel has always enjoyed, Ethria is a place where power can be found in many forms, both light and dark, and whose true purpose is unknown even to most of its denizens.

Taking the long way home, Daniel will make another choice, to help a group of persecuted people whose story mirrors that of his pioneer ancestors. But in a time when Gods are changing, the people of every race suffer, the foundations of nations shift, and change and danger are in the very air, what can one under-leveled foreign wizard do?

All the while at the roof of the world, at the base of the Sawtooth Mountains a darkness grows, a creature plots, and an ancient evil from the foundations of the world seeks to re-emerge onto Ethria.

Good book so far. Roughly halfway through the story. My main issue is with the background noise. Sometimes as the narrator is doing his work, I can hear what sounds like children playing on the background. Not a major issue, but it's niticable

A horrific MC which lectures the reader on earth history constantly also the author is an american of the Republican party. this is obvious because he talks about abortion. I'm European so I really should not be able to tell but he is so condescending about the "2030 abortion riots" that it's obvious. He also rigoursly defends bombing japan despite apologising for everything else which is not his fault.

No progression he gets given everything he has all book and he has a thing where he refuse to hurt sentient life which is just a pain whenever it comes up.

the "action" is awfully no explanation just suddenly they're fighting. Then suddenly they're not anymore.
like this...
"Hi Elsa did I tell you about how great America is and the abortion riots of 2030.
I quickly melt the face of 'insert random opponent'
Yeah anyway America is amazing.
I go back to eating cereal"

Now I see that this is in fact a clearer and more concise series of events then anything in the book.

This book does in fact have a strong introduction and a book about kingdoms of ash may actualy be intresting providing that a different author writes it.

Dont buy it may have a good intro but the rest is just endless filler between poorly written events and MC apologising for existing or explaining why bombing japan is in fact the best thing America could have done:(

A few minutes into the book mc throws a tantrum because he had to kill a goblin..... The stat reveal in the goblin was way to detailed and the narrator spoke the entire slowly. Dont waste the credit

I am glad I gave it a 2nd chance! Amazing!

Cons:
- Started real slow, a lot of infodump
- Too much history lessons
- Barely lack of action initially
- Was waiting for his class, he doesn't have one yet
- Things really start up after 4-5 hrs
- There was some cringey singing I had to fast forward.

Pros:
- Narration is amazing, He clearly puts a lot of effort and emotion with his multiple voices , it really brings the story to life.
- MC isn't dumb, he doesn't keep important information to himself alone. He knows when to step up or when to allow his allies to lead
- MC has some good ideas that made sense and kept me guessing
- Multiple weapons and items were used, kept the fights fresh
- Gets pretty dark along the end
- Villain isn't one dimension, I love how she was voiced

More to mention, clearly it was amazing. Good thing I trudge through the earlier parts.

Loved the book good main chat if a bit on the dumb side. I don’t understand his want to return home this world is much better than earth could ever be.... also kinda mad at the author for putting off class selection till the next book would have made Spence if he ended the book when he got the option to choose but he had the main character completely ignore it for days witch makes no sense as he’s a gamer and not being able to level up until he makes the choice makes it totally illogical for him to ignore it! As a reader it’s in very frustrating....

I have read ALOT of LitRPG novels and I am certain this one is near the top in the "Word Building" category. Holloway creates a deep fantasy world with alot of interesting characters and alot of lore. I appreciated the amount of time and effort the author put into creating an epic fantasy world. There is alot of great action and humor as well.

Christian Gilliland knocks the narration out of the park. He had to play several diverse roles in the book and does it masterfully. Don't hesitate to purchase this audiobook or using a credit. Very good and very long.

decent addition to the genera

MC gets transported to another world with the mission to find a home for a displaced people. The MC is LDS and uses his knowledge of his people's religious persecution to try to reduce the hardships that his new people will have to face.

The narrator brought the characters to life, and overall did a good job.

The story was solid, with light touches of LDS beliefs mentioned here and there(not onerous, but some might not be wild about it). It started off a touch slow, but developed into a good pace.

Ethria: The Pioneer follows the exploits of Daniel, a guy who gets forcibly sent to a video-game world with the mission of finding a new home for a large number of refugees. Along the way, he meets a plucky fairy guide and helps out a group of high elves.

One of the world-building aspects of this novel that I enjoy is that it was written with the understanding that all characters are able to level up and gain stat points. I always enjoy reading about how society would grow differently under those conditions.

The characters and different races are given a good deal of backstory and depth. Much of it is clearly Tolkien-inspired, which is fine by me. Daniel often talks about Earth history, technology, and politics, which can be interesting when taken in the context of a fantasy culture. Since it takes place in our future, some of the referenced wars and technologies were speculative, which is also interesting.

The narration was very good as well, and Christian did a good job of voicing the various characters. His singing though.... maybe not so much.

I'll certainly be looking forward to future books in this series. Highly recommended for anyone who likes LitRPG,

A step up from the pack of LitRPG

Started of well and the story immediately draws you in. The dreaded stat sheet that takes 5 mins is mostly avoided here in a clever way. The author needs to be less verbose in his laying down of the foundation of the magic system and other mundane stuff. I liked the characters even though the MC was sometimes inconsistent with the way he behaves. He mostly seems like a no nonsense direct person that stands tall no matter the situation. There were at least 3 instances where he backs of when he should have been cool or smacked the shit out of some characters that overstepped. He was mostly in the wrong in those cases but he let them walk all over him because of this, which didn't seem like he was that kind of person. I would definitely get the next book in the series when its out as the good parts of the book far outweigh the bad.

Disclaimer: I received this book for free and was not required to put up a review, but Im doing so because the book is just that good

I enjoyed the story. Finally a Main Character who uses his knowledge of ancient history and myths to help him in his new world! He also stays true to his Earth religion. Yes the book brings faith, Morman to be exact, into the story. But that makes the character believable. Many people have some kind of faith. Most books seem to ignore that fact. It may not be everyone's cup of tea, but I liked the dimension it brought to the character. The author does not preach or shove belief in your face, it is just another aspect of the MCs personality/history. Similar to how formal education is part of his character or race is part of a character in some books. I look forward to more books in the series.

Slow start, but great once it got rolling!

The characters were fantastic and I enjoyed their interaction. I really enjoyed the inclusion of earths history and how it fit in throughout the story line. I appreciated that the MC was more of a min/max'er at the start and had some serious weakness with melee/combat. I look forward to see how he continues to develop. Cant wait till the next book!

An excellent addition to LitRPG

With a story that has many twists and turns, this one is a great start to a new series. The narrator did well as the voices felt unique. I'm looking forward to the next one!