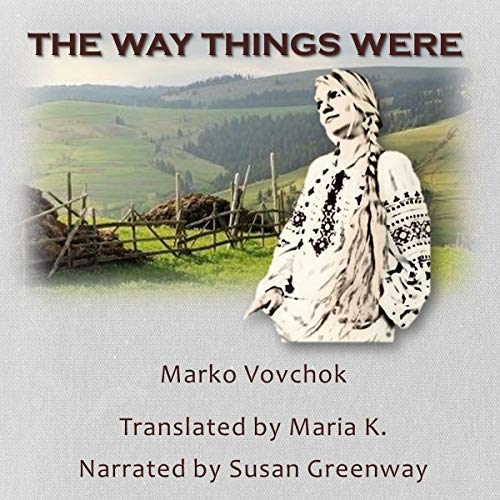 The Way Things Were

By: Marko Vovchok
Narrated by: Susan Greenway
Try for £0.00

The Way Things Were is a collection of stories and novellas by Ukrainian writer Marko Vovchok (Maria Alexandrona Vilinskaya-Markevich) focused around the lives of Russian and Ukrainian serfs during the last decade of slavery in the Russian Empire. These works were instrumental to the abolitionist movement, whose members - writers, poets, artists, and political activists - eventually succeeded in bringing about the Emancipation reform of 1861 and ending six centuries of serfdom.

Marko Vovchok's stories are not epic, historically significant episodes, but rather small everyday vignettes from the lives of serfs and their masters, made all the more powerful by their serene, conversational style bringing the reality of the era into stark relief.

What listeners say about The Way Things Were

These stories are truly beautiful and the storytellers tell their struggles in the spirit of the title - as things were. There is not much necessary moralisation over things, emotions are described as people felt them, but the text on its own is free from bias. And although most of the stories are terribly tragic, they dont drag ones mood down, but leave a question in the head afterwards.
My only issue was the occasional audio error where a line was repeated, the narrator stuttered or... and not to be mean, completely butchered the slavic names. This small error might be a little confusing in following thw story, since not only are the names very difficult to recognize, the bad pronounsiation is not consistent and sometimes suddenly changes in the middle of the story, but is clearly the same name. But its a minor issue.

The Way Things were.
I currently work in Ukraine and find these short stories of times long past really interesting. They are reminiscent of Chekov's tales.
A Classic collection which tells of life in the 1800s.
Well written and narrated. And well worth a listen.
I received a free copy of this audio book at my own request and voluntarily leave this honest review. .