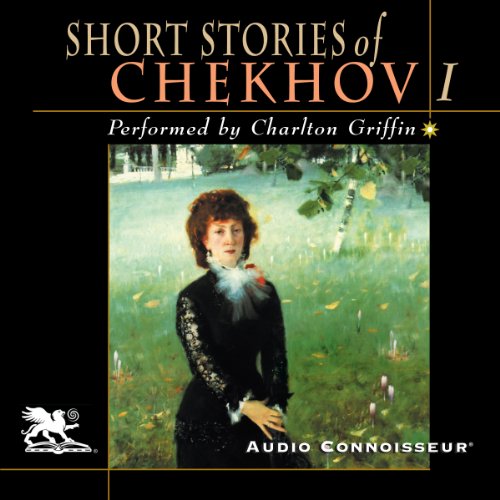 By: Anton Chekhov
Narrated by: Charlton Griffin
Try for £0.00

Anton Pavlovich Chekhov, (1860-1904), was born in Russia at Taganrog on the Sea of Azov. His name has become synonymous with a certain literary style much admired and widely copied since his death. Typically, a Chekhov story is a "mood", a state of mind, usually with regard to relations between one person and another. Under the influence of the constant, infinitesimal, and unforeseen pinpricks of life, there occurs a gradual transformation of that state of mind. His writing is at once fluid and precise. Most of his stories end on a minor note, instead of the dramatic flourish. Today, Chekhov is regarded as Russia's greatest writer, and his narrative works continue to attract an ever wider circle of readers worldwide.

This volume includes the following unabridged works with music and sound effects:

Finally, "An Essay On The Life of Chekhov", by Dimitri Mirsky, takes us on a tour of Chekhov's life and career. This critically acclaimed work of scholarship is clearly and concisely written to bring into perspective the life of one of Russia's greatest literary figures.

"It is richly done, with lifelike sound effects and a delicate musical score woven skillfully into Charlton Griffin's impeccable narration. Griffin creates both fine characterizations and the intimate tone of the master storyteller. His reading is languid and cosmopolitan, filled with the fin-de-siecle ennui that is so characteristically Chekhov, while at the same time deeply evocative." ( AudioFile Magazine)

What listeners say about The Short Stories of Anton Chekhov, Volume 1

I had been waiting a long-time to catch up on the famed short stories of Anton Chekhov. Finally, I found the best volume with an awesome narrator and a subtle music score. I love Chekhov’s wonderful, unpretentious narrative with a hearty dose of irony and candor. I really hoped that they had done a Volume 2 also. My favorites were “The Lady with the Dog” and “Kiss”. These two stories are absolutely stunning in their realism and frankness. These stories are still very valid in our present time. A must listen!

A Box of Chocolates

This is a box of chocolates. Smooth, rich, and deeply satisfing. I savored each and every piece and went looking for more.

Narrator Griffen really brings these stories alive. His interpretation seems to fit the the story's character and theme. I only wish that there could have been more stories included in this volume. It is a little scant in the number it offers, but what is offered is golden.

These Short stories by Chekhov narrated beautifully, sometimes with a beautiful background music, are a great introduction to this great Russian writer.

I've never been exposed to Chekhov, and was naturally a bit apprehensive, but was quite happy to discover that the stories were not only very accessible but refreshing and still quite original and thought-provoking. The prose itself naturally feels slightly dated and often heavy-handed, but the themes and characters are the thing here and each of these tiny little morsels becomes more flavorful after it's over and you've had time to turn it over in your thoughts.

The problem is the narrator. Although the narration is certainly skilled and thoughtful, the narrator uses unnatural force to emphasis every individual word, apparently trying to hit the reader over the head with the insistence that This Is An Important Classic Dammit, Every Word Is Gold. The rhythm, the tone, everything about the reading seems to worship the (quite honestly uninspired) prose at the expense of the story, and the result sounds like the worst English professor you've ever had relentlessly reading /at/ you. Interestingly, playing at "high speed" on an iPod makes the narrator at least speak at a normal human speed, thank god. But ultimately, this type of treatment and attitude is exactly why nobody reads "the classics".

Would you consider the audio edition of The Short Stories of Anton Chekhov, Volume 1 to be better than the print version?

Chekhov's amazing talent is shown by bringing out the raw truth & beautiful heart of his stories, one after another.

What aspect of Charlton Griffin’s performance would you have changed?

volume levels while reading conistent so I don't have to turn up volume to hear a few lines just to have the overtly loud songs shatter my skull.

I had emotional connection in that I understood what the short stoiy chars felt.

I picked this set of stories as a change of pace from the technology, politics, history, and biography stuff that has become my staple food. I thought this might be good for me, like eating my vegetables.

I must be clueless. Though these were well produced, I found the stories to be dry, uninteresting, and without a point. I know others find this set of stories to be like nuggets of gold, but I can't for the moment see what others see in them.

Read these if you love Checkov, I guess. Otherwise, check in with your English teacher first.