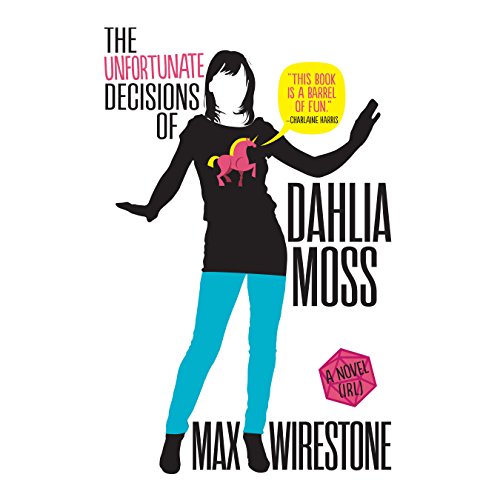 The Unfortunate Decisions of Dahlia Moss

The Unfortunate Decisions of Dahlia Moss

For fans of The Guild, New Girl, Scott Pilgrim, Big Bang Theory, Veronica Mars, or anyone who has ever geeked out about something.

The odds of Dahlia successfully navigating adulthood are 3,720 to one. But never tell her the odds.

Meet Dahlia Moss, the reigning queen of unfortunate decision making in the St. Louis area. Unemployed, broke, and on her last bowl of ramen, she's not living her best life. But that's all about to change.

Before Dahlia can make her life any messier on her own, she's offered a job. A job that she's woefully underqualified for. A job that will lead her to a murder, an MMORPG, and possibly a fella (or two?).

Turns out unfortunate decisions abound, and she's just the girl to deal with them.

"A hilarious read sure to delight mystery lovers and gamers alike. With unforgettable characters and a stand-out heroine, Dahlia kept me guessing until the very end. A laugh-out-loud gem of a book." (N.K. Traver, author of Duplicity)
"Dahlia's story is a zany, hilarious, laugh fest that made my inner geek girl sit up and search for a caper to solve! Take the clumsy sweetness of Bridget Jones, combine with the intriguing geekiness of Felicity Smoak, and you have Dahlia Moss in this delightful romp!" (Rebecca Zanetti, New York Times best-selling author)

Very funny, wonderful characters, and a good mystery to boot. Narration is excrellent a well.

reminiscent of an early Janet Evanovich

it was a nice little lighthearted book. it reminded me very much of the early Stephanie Plum novels