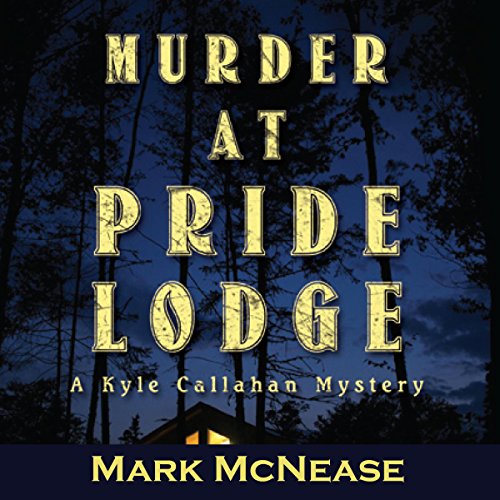 This is the first in a gay mystery series, the Kyle Callahan Mysteries.

Who killed Teddy the handyman - if anyone killed him at all? Was it Sid, one of the new owners of Pride Lodge whose past gets darker the closer you look? Was it the woman whose name was once Emily, when she witnessed the murder of her parents in a burglary gone terribly wrong, and who has waited 30 years for vengeance? Was it young Happy Corcoran, promoted to bartender only to vanish three days before Teddy was found dead at the bottom of the empty pool? Find out as Kyle Callahan refuses to believe it was an accident, doggedly pursues the truth in his friend's death, and does his best not to join him.

Kyle and his life partner Danny Durban live in New York City, where murder never seems to be more than a subway stop away. In this first story, they head to Pride Lodge, their favorite getaway from the City, over what they expect to be a festive Halloween weekend. What they find instead is a web of murder, deceit, and revenge served cold as a knife blade.

What listeners say about Murder at Pride Lodge

no not really.the plot was thin.i couldn't follow it at all

Would you recommend Murder at Pride Lodge to your friends? Why or why not?

no as ive said the plot was thin and I couldn't follow the story.

yes the narration was good.didnt takeaway from the story being bad

Did Murder at Pride Lodge inspire you to do anything?

it inspired me never to read it again.

I loved it! This is a stand out because unlike other gay mysteries, the folks at Pride Lodge are LGBT people who are over the age of 50. The author captures this phase of LGBT life in a very engaging and insightful way and with a great deal of wit and humour. Pride Lodge becomes a very real place -- I have even had a dream about it. The second in the series is about to become an audiobook an I can't wait.

Would you consider the audio edition of Murder at Pride Lodge to be better than the print version?

I loved the book and this series. It just keeps getting better and better. When the audiobook came out I jumped - and spent 6 hours spaced out over the weekend engrossed in the story. K.C. Kelly does another great reading and I hope the other books are out for listening soon.

Kyle of course! Classic hero...gay or straight! Loved hearing him come to life off the pages.

Which character – as performed by K. C. Kelly – was your favorite?

Without questions, Kyle, as the leader of the pack of delicious characters. Then in short order: Danny, Sid and on an on down the line. Always fun to meet the next one...as K.C. Kelly interprets the great words of Mark McNease.

If you could take any character from Murder at Pride Lodge out to dinner, who would it be and why?

Danny Durbin, of course...to see what it is he thinks that keeps Kyle, his lover, ticking. He knows the inside of Kyle's mind better than any of us.

A must listen! Perfect in bed with a cup of chamomile tea, while driving along dark roads (dare you) or in the morning getting ready for church...as I just did to finish the book off. 2 hours in each of these scenarios for me. Ready for McNease's next audio book in this series, please!


There are happily settled couples, colorful resort staff, a sad revenge assassin, a diligent homicide detective, enough plot twists to keep me happy, well done suspense, and no kind of gratuitous erotica. The publisher's blurb gives the barest of clues, and for once I'm doing a spoiler by raising the suspicion that one of the murders is unsolved. But don't tell Callahan.
I got this as Whispersync on the cheap, and I feel that K.C. Kelly was really great as audio performer.

Once it gets going it's fun and very engaging

Would you listen to Murder at Pride Lodge again? Why?

I wouldn't listen to it again just because I don't read books twice or see movies twice, but I would reccommend it.

The fact that it centers on older characters and doesn't rely on sex as a selling point. It's intelligent, and meant for an audience who likes mysteries that make you think.

What about K. C. Kelly’s performance did you like?

He did a good job. No complaints. And I hope he's reading more of these!

We meet Kyle and Danny, going to a Halloween party, for a week end of fun. One expects a lot of mummies and other scary decor, this had a dead body awaiting in a pool. Good start to the series as the characters develop more. Given audio which was enjoyable for my honest review.

Loved it. For fans of LGBT fiction this is a must read. Set in suburban Philadelphia, it focuses on a gay couple staying at a lodge when a fellow guest dies. It takes off quickly and doesn't stop. I'd like to say that I foresaw the ending but I did not. Give this book a try!

Ending was sort of Scooby Doo-ish as were the characters.

The performance was entertaining.

Do you think Murder at Pride Lodge needs a follow-up book? Why or why not?

Worthwhile listening but not exactly innovative or outside of the box character development for LBGT literature. Pride Lodge seems like pretty boring and sleepy place for a murder let alone a place that anyone would want to be interested in visiting. Felt more like LBGT Agatha Christie without the entertainment of being on the Orient Express.