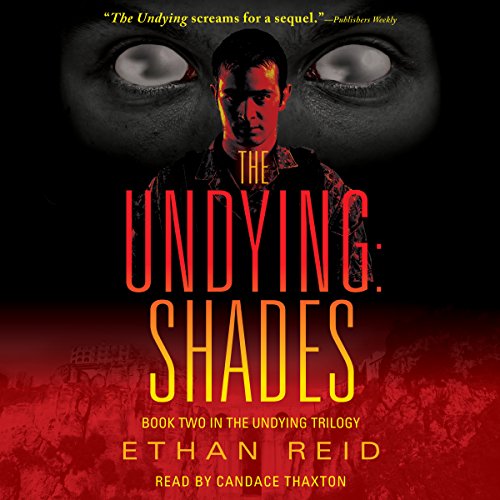 The Undying "screams for a sequel" (Publishers Weekly) - and Ethan Reid delivers in this riveting follow-up to "a thriller that brings a genuinely fresh take to a monstrous mythology" (Andrew Pyper, number-one best-selling author of The Demonologist).

The fate of the world is in his hands.

The Undying: Shades finds American student Jeanie and her young charge, Ren, 15 years after the EMP that wiped out Paris and sent them on the run from the undying. Walking the highways and hiding out in abandoned buildings across France, they eventually find their way to Spain and the walled city of Ronda, where a few dozen survivors have gathered - safe enough from the hunting undying but facing a new threat on the scorched planet: starvation.

With their main resource - humans - bordering on extinction, the undying have weakened, retreating to their hives and slowly withering away. But not for long. A dark presence arrives, casting its shadow across Spain, reawakening the hives and creating a new breed of monster. Driven by some alien intelligence, these Shades not only reanimate the undying but can possess the living, turning survivors against one another.

When Ronda comes under attack, Ren saves the day. As the youngest human left on Earth, he has been blessed with a special gift that makes him a perfect killing machine - and the last hope of humanity. Forced to leave the safety of the barricades, he takes to the highways with a company of Spaniards who intend to eradicate the undying from Europe hive by hive, using Ren as their secret weapon. But as they approach Sevilla to face the most powerful Shade yet, Ren learns some in his company aren't all they appear to be....

What listeners say about The Undying: Shades

A Delicious Banquet of Horror

Shades serves up like a delicious second course at a banquet of horror. It compliments, meets and exceeds the flavors laid out in the first novel. Reid continues his Undying series with a tale that is exciting and terrifying and filled with characters that are both bold and real. As the few remaining humans struggle to survive the undead are evolving - driven by a dark force deep in the ground - and hell bent on devouring them all. The background and settings are like a sauce that he masterfully crafts from the bold tastes of Gothic, Apocalypse, Zombie and Lovecraft styles. As narrator; Candace Thaxton sets the table and delivers the story in a way that draws you into the vibrant, violent and chaotic after-world. I seldom give 5 stars but Reid and Thaxton have earned it with this one. Can't wait for the third course!