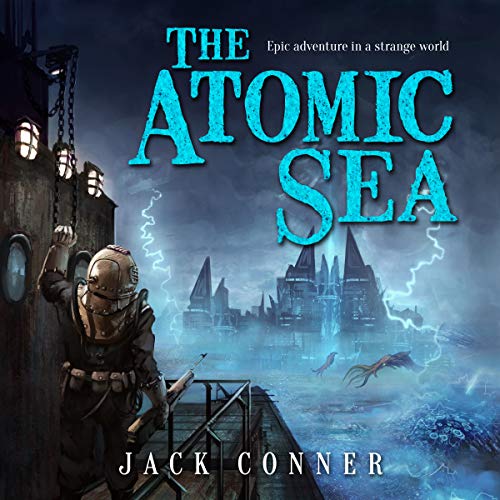 The Atomic Sea: Omnibus of Volumes One and Two

By: Jack Conner
Narrated by: Ray Greenley
Try for £0.00

What is the secret of the Atomic Sea? Toxic. Mysterious. Lightning shoots up from it. Just to breathe the air above it causes mutation. Now, in a time of world war, one man will be pressed to discover the truth and unlock the secrets of the Atomic Sea, or the whole world will be plunged into nightmare. Join listeners around the globe in delving into the mysteries of this strange world.

A thousand years ago, the sea began to change, and the change spread.

Dr. Francis Avery is aboard a military whaling ship far out on the eerie Atomic Sea when a series of murders onboard propels him down a rabbit hole of danger and terror. For years he's tried to forget the deaths of his wife and child at the hands of the Empire of Octung, which has declared war on the world. He's fueled his anger into helping the defense against Octung and drowned his sorrows with whiskey. Now he becomes aware of an Octunggen spy on the ship. When his friend is murdered, he has no choice but to track the killer.

As if this wasn't enough, suddenly a mysterious woman is pulled from the toxic, lightning-wreathed depths of the Atomic Sea. Though weak, she's alive and unaltered by the waters - which should be impossible. Her name is Layanna, and only she can stop Octung.

As her doctor, Avery brings her back to health and in time grows to form an attachment to her...an attachment threatened when the spy who killed his friend is ordered to assassinate Layanna, too. Avery must save her and help her accomplish her mission, or the whole world will fall under Octung's shadow - and that of its enigmatic rulers.

That's just the beginning. With Layanna and the grizzled whaler Janx, Avery will embark on an epic, globe-spanning quest through a strange world to save it from Octung and unravel the secrets of the Atomic Sea. Get ready for high-flying action and excitement featuring zeppelins, romance, Lovecraftian horrors, and more twists and turns than you can shake a stick at.

What listeners say about The Atomic Sea: Omnibus of Volumes One and Two

Childishly written and woefully narrated, I didn't care about the characters and the plot lacked any atmosphere. Would not recommend!

The ideal and story is quite interesting and makes you think my issue was how audle one started by just throwing into the story with no background information about the story or the characters. I will say it keep you interested but sometimes you are not given information to understand the plot or storyline slowly you do finger out the plot and storyline see so many you get lost from one to another and you are left having to backtrack and read or listen again to try to figure what is happening.
The author did a great job in writing the story but a bit more information in some areas would have been good. The narrator also did an awesome job bringing the story and characters alive.
So my recommendation is try it out I did like and will finish the rest of the series.

Would you listen to The Atomic Sea: Omnibus of Volumes One and Two again? Why?

I would listen to both of these books again, because there was so much to the world and story, I felt it was a lot to take in and digest as an audiobook.

What was one of the most memorable moments of The Atomic Sea: Omnibus of Volumes One and Two?

I actually liked the attack on the beach with the large crab things that melted people. Avery was and did accept that his life could be over and all throughout the story there were interspersed parts about his wife and child, I found some of his internal monologue very thoughtful and deep at times.

Then when Jenx's gang sit down to tattoo the names of their fallen friends on their bodies, it was so deep and meaningful. Avery stood up here, and throughout the novel learned and became a much better man for the journey.

Ray brought with him a deeper voice than I've heard so far. But the characters were unique enough that I knew who they were and enjoyed them. Especially the voice of Avery. Who I admit I did not like at all at the start of the book.
There was excitement, sentiment and real dire situations every moment had the right tone, and delivery. :) great to listen to.

Wild sea adventure with monsters and traitors. haha. I suck at these.

I would be crazy not to mention the facts that these books do just kinda stop. It is one of the worst things you can do as a writer, but it's almost forgivable because the characters are so well rounded.

So, characters, yes I didn't like Avery. He's an idiot at the start of the story and one who I just didn't like or understand. Yet our writer has quite the journey for this guy and Avery's back story and life unravel through out the book in a way that's not invasive but interesting and true to him.

Sheridon I wasn't sure was a traitor at first, but there were deft clues here and there leading towards me believing there were several people involved there. And of course there was. Janx. (sp) was great to, I loved him. I did think at first he was called Jinx. Could have just misheard it as they were catching the whale.

Layanna is for the most part in a coma in the first book, so the story focusses on Avery and Sheridon's bad relationship the actual world that they're in and the war with the Octung, which is very dark and foreboding. Not just because of the world war feel to everything, but for the dark and twisted creatures that they use and the weaponry they have. This is a fight that I don't think Ganeshi (sp) can win. And with traitors around they're defo got no chance.

I did think there were some overused terms. Avery drinking, boy that man's an alcoholic, if that was the intention it's fine, but it was so bad at some points I needed a drink! also a good few of 'he said, she said' I personally didn't think were needed. Some bothered me enough to pull me out the world.

Yet, overall this novel and narrator were a good team and because of the cliff hanger ending I have to continue, so thanks for that. haha

Yes, the Cthulhu old god theme is something most of my friends would like.

Which character – as performed by Ray Greenley – was your favorite?

The book is really messed up at parts. Both the writer and the narrator do a great job at immersing you into the books environment, which if you like description in your fantasy horror your in for a treat.

I love the fact that this was in a collection. Definitely picking up book 3.

This series needs adleast 2 other voice actors to cover it. The narrator here is good for many male voices but he is clearly stuggling with the female ones. They all sound nasally and too similar. Many of the male voices are also too similar. The story is interesting, if somewhat fast paced.

I tried but just couldn't get into this book. Bad story worse narrator. don't recommend.

Rough Seas from beyond..

this series was excellent read I enjoy the story the characters the narration could have been better.I was enthralled by the idea of our oceans changed by otherworldly forces by it seemed the human drama initially dragged the story.Once certain characters were out of the way, the story improved greatly. Eventually the cast swells to a legendary size, with scoundrels worthy of their own books.The dark villains are revealed to be terrible and not always simple to understand.great books, hope to see more released!

What made the experience of listening to The Atomic Sea: Omnibus of Volumes One and Two the most enjoyable?

The story was quick-moving and held my attention well. The story was captivating; I listened while driving and was at my destination before I realized it.

Avery was my favorite character because over the two books he grows from a humble, push-over doctor to an unlikely hero hell-bent on saving the world.

Greenley has a pleasant narrating voice and really keeps pace with the story well. He makes listening to this book a pleasant way to spend 13 hours.

This was a darker story than to which I would usually listen. I'd say it is similar to a World War II situation but where higher, inter-dimensional powers had been effecting the world for several millennia prior. The world has been bubbling with untapped energy (in some ways litterally) for that time, and this book takes place just as that energy begins to explode outward across the world.

Even though it was darker than my typical listen, it still moved fast and held my interest. I'd recommend it to someone who was a fan of other sci-fi war/battle-type books like Starship Troopers and such.