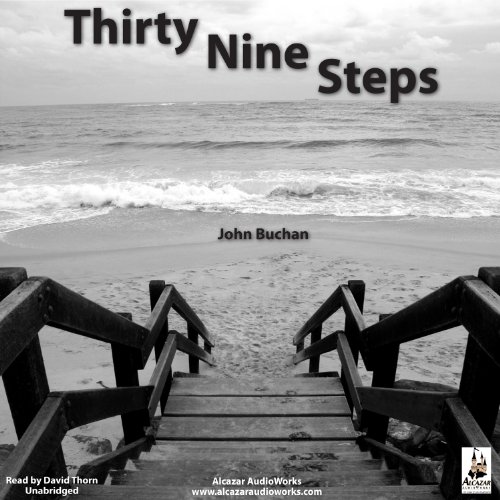 By: John Buchan
Narrated by: David Thorn
Try for £0.00

Richard Hannay, Buchan's hero in this 1915 thriller, stumbles across a terrorist plot to destabilize Europe. A British spy in the mold of James Bond, Hannay is an action man with a polished veneer. After a series of murders, Hannay takes up the cause when he has to go on the run. A thrilling series of events come to an exciting conclusion.

Chapter 01: The Man who Died

Chapter 02: The Milkman Sets Out on his Travels

Chapter 03: The Adventure of the Literary Innkeeper

Chapter 04: The Adventure of the Radical Candidate

Chapter 05: The Adventure of the Spectacled Roadman

Chapter 06: The Adventure of the Bald Archaeologist

Chapter 08: The Coming of the Black Stone

The son of a minister, Buchan was born in Perth, Scotland. Buchan won a scholarship to Oxford and received several writing awards while studying classic literature. After traveling the world in diplomatic circles, Buchan spent time running for political office, publishing a magazine and writing spy thrillers.

After success in many arenas and impressing many with his contributions during WWI, Buchan was appointed Governor General of Canada, where he served until his death. Upon his appointment, King George V, made him a peer.

Excellently read, great characterisations.
Would highly recommend it.
But i do prefer the film version.

THE 39 STEPS by John Buchan is a classic mystery of political intrigue before WW2. Richard Hannay is feeling board in his apartment in London, when a stranger comes telling a tale of intrigue. When a dead body is found in Hannay's room, he goes on the run, trying to fulfill the stranger's job of warning the English of impending danger. Many close calls keep Hannay on the run. He much convince the powers to be that he knows what he's talking about, and catch the German spies.

This classic mystery is well done with many small adventures with every chapter. Hitchcock did a great film of this story of espionage and intrigue just before WW2. Without car chases, computers, or many fire arms that make up so many of today's thrillers, Buchan maintains a great pace in this book.

I enjoyed the historical setting/context of this book.
I thought the reader did an excellent job.
I could well imagine Alfred Hitchcock making a movie of this -- it was fast paced and mysterious in parts.
I could detect influences of other writers of his time.
The only complaint I might make is that the book's plot is a bit simplistic compared to contemporary suspense work.

Most of us who love mystery and suspense stories have seen at least one dramatization of "The Fifteen Steps", whether on stage, in movies, or in a television performance. The productions I have seen have made substantial changes from the original book.

For instance, those productions all left me with the impression that the story was set in the period immediately before World War Two. In fact, this story was published in 1915 and involves the period leading up to the FIRST World War. And the most radical change from the book is the addition in many versions of a lovely young woman who accompanies the hero in his frantic dash across England in an attempt to foil the plans of a band of conspirators who want to begin a war by assassinating a foreign official.

This original version of the story was a great listening experience, with excellent narration by David Thorn, who handled various regional dialects and foreign accents with great skill. At the price (only $1.95 for members), you will get more than your money's worth.

John Buchan's mysteries are well known to older generations but not so to younger readers. So bravo to Audible for distributing this classic tale. The thirty nine steps is the story of a "colonial" Britisher recently returned to London and finding himself in the middle of an international conspiracy. He's quite the hero, almost singlehandedly escaping his pursuers and nudging the stodgy military establishment into action. These days, a character like this is no longer credible: the singularly brave and resourceful individual, motivated both by a love for adventure and love for his country. But the main character is far from arrogant; in fact, he's the stereotype of the unassuming and modest but extremely capable British citizen. I realize this may not appeal to postmodern readers of today. I especially enjoyed the ins and outs of the plot and the detailed descriptions of the ordinary people of the Scottish moors and Welsh hills. David Thorn's narration is impecable and his Scottish accent for some characters seemed quite authentic to a non-British speaker.

Like spy books this one may be old but it has a lot of merit. Spy's today must have taken this book. Going to look for more.

A modern spy story released in 1915

Fantastic story telling and a great performance. Its james Bond, but more than 40 years earlier.

Although not as tightly written as some other books of the same genre, this is a suspenseful tale of Nazi spies on the eve of WWII. David Thorn's excellent narration coupled with Buchan's British understated humor made this a thoroughly enjoyable audio book.

Buchan was always good worth before good was expected. His stories are still terrific and Thorn is top notch.

Great book - Better than the Movie

I was only aware of the movie. A great book written before The Great War (more or less). Ok 1915.