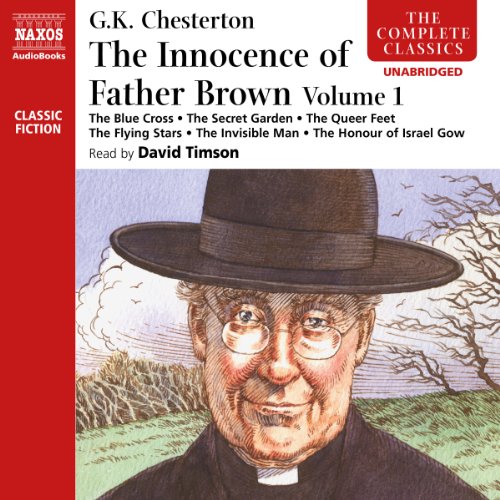 The Innocence of Father Brown

Chesterton's stories of Father Brown, a self-effacing priest who applies his brilliant mind to solving mysteries, are often implausible, melodramatic, and dated. Still, they entertain, and David Timson reads the first six here with loving care. He gives Brown a mild voice, but likable and not weak, and provides other character voices without strain or caricature, including accents. (His American is very good.) His warm, rich, naturally expressive voice not only conveys meaning and emotion but also brings an overall tone of amusement to the stories, letting us know how to take them - this is voice as interpretation. That may seem affected, but Chesterton's stories, self-consciously clever romances addicted to paradox and disputation, are far from naturalistic. Timson gets the tone just righ

Father Brown is an eccentric priest with his own particular ways of dealing with crime. David Timson, having completed the whole of Arthur Conan Doyle's Sherlock Holmes canon, a remarkable achievement, turns his hand to the genial but certainly not innocent priest! This collection contains a group of stories from the Innocence of Father Brown, told unabridged.

What listeners say about The Innocence of Father Brown

Better than the telly!

I very much like the TV series of Fr Brown, but these stories are much 'purer' with none of the sentimental accretions of the dramatised version. Excellently read, and each short story exudes a humane understanding of the human condition regardless of how ghastly the acts described.

I enjoyed both volumes of THE INNOCENCE OF FATHER BROWN. David Timson is always an amazing narrator, but here he surpasses himself as he renders innocents and villains with equal aplomb. Father Brown himself is unique and unforgettable, as are many of the ancillary characters, and the settings are varied and delightfully rendered. I recommend the two volumes to those who love a good short story collection, classic mysteries, or just long for a little trip back into a world forever lost to us. Enjoy them.

Not all of the stories

Would you try another book from G. K. Chesterton and/or David Timson?

This is only 6 of the 12 stories. Therefore, most definitely NOT unabridged. Disappointed.

Would you ever listen to anything by G. K. Chesterton again?

Yes, we love G.K. Chesterton. Just wanted the whole book instead of only half.