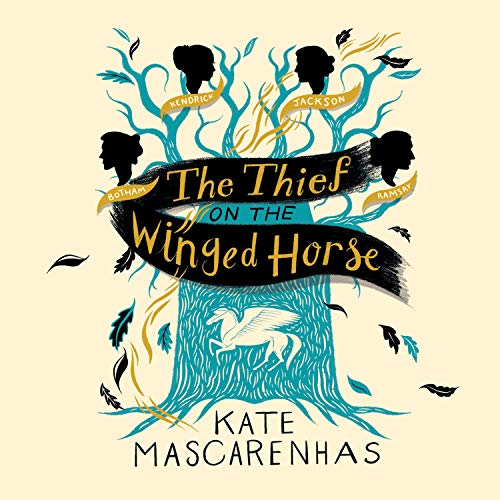 The Thief on the Winged Horse

By: Kate Mascarenhas
Narrated by: Olivia Vinall
Try for £0.00

A dazzling mixture of crime, romance, magic and myth from the acclaimed author of The Psychology of Time Travel.

The Kendrick family has been making world-famous dolls since the early 1800s. But their dolls aren't coveted for the craftmanship alone. Each one has a specific emotion laid on it by its creator. A magic that can make you feel bucolic bliss or consuming paranoia at a single touch. Though founded by sisters, now only men may know the secrets of the workshop.

Persephone Kendrick longs to break tradition and learn the family craft, and when a handsome stranger arrives claiming doll-making talent and a blood tie to the Kendricks, she sees a chance to grasp all she desires.

But then, one night, the family's most valuable doll is stolen. Only someone with knowledge of magic could have taken her. Only a Kendrick could have committed this crime....

What listeners say about The Thief on the Winged Horse

An interesting take on a magical tale.

I initially chose this book as I had previously read the psychology of time travel which I really enjoyed.
I wasn't expecting the story that I got but it was a very good blend of magic, history, present day and a little bit of love thrown in too.

Engaging but maybe lacked a little

I really enjoyed this book & listened on audible in just 3 days. I just finished it feeling a little bit unresolved? Wanting more? I’m not really sure. Once again this book ticked a lot of boxes for me, slight magical element to a “real world” story. I liked characters and the dynamics between them. Overall a quick listen (read) that I really enjoyed.

A very different listen. Chilling, sad & an interesting way to tell a tale of change. Quite relevant to our times. A definite for listening again.

Interesting in concept, lacking in excecution

I’ll still be reading whatever else this author writes next, because I loved «The Psychology of Time Travel» that much. That book instilled in me a solid faith in her ability to create interesting worlds. However, like with Psychology, the development of the characters and the plot itself fell a little flat.

I also think –if possible– this one might have even stronger undercurrents of «feminist literature». Which might be a plus, or it might be a minus – depending on who you ask.

Mostly I read it, and enjoyed it, for the magic realism and the way the dolls, the making of them and the trading of them are described. Here, the author’s passion really shines through and the solid knowledge and research put into this element, saves the novel from turning into yet another dreary family intrigue.

PS. There is no winged horse.