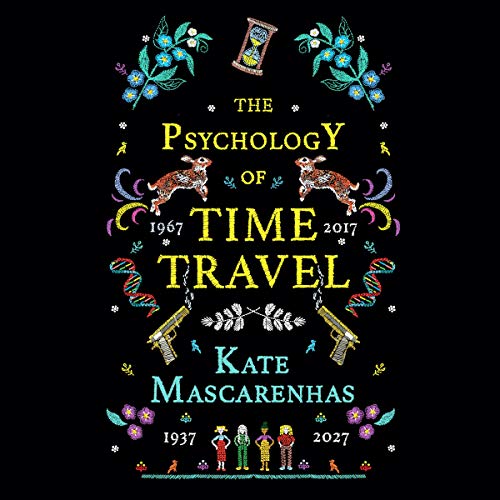 The Psychology of Time Travel

By: Kate Mascarenhas
Narrated by: Ellie Heydon
Try for £0.00

In 1967, four female scientists worked together to build the world’s first time machine. But just as they are about to debut their creation, one of them suffers a breakdown, putting the whole project - and future of time travel - in jeopardy. To protect their invention, one member is exiled from the team - erasing her contributions from history.

Fifty years later, time travel is a big business. Twenty-something Ruby Rebello knows her beloved grandmother Granny Bee was one of the pioneers, though no one will tell her more. But when Bee receives a mysterious newspaper clipping from the future reporting the murder of an unidentified woman, Ruby becomes obsessed: could it be Bee? Who would want her dead? And most importantly of all: can her murder be stopped?

Traversing the decades and told from alternating perspectives, The Psychology of Time Travel introduces a fabulous new voice in fiction and a new must-listen for fans of speculative fiction and women’s fiction alike.

What listeners say about The Psychology of Time Travel

An atypical time travel story: subtly textured with its arcing character portrayals; neither overly burdened with science nor fluffy explanations of the mechanics but well balanced with logic and constraints; elegantly tangled and gently teased into a new, satisfying configuration at completion. The rare kind of book where it is only after the end that you realise how sophisticated a book it really was. A wonderful impression to be left with.
The narration was excellent, and leant just the right air to the piece. I was quite captivated.

Only if you’ll forgive anything in the name of feminism.

This review should be read with a proviso.
If it was written as teen/young adult literature then allowances would have been made - but if that’s the case it should have been advertised as such.

When I was 11 I wrote and had a short story about time travel published in a local newspaper.
When I read this book it made me think that the 13yr old me would have written this book.
It’s naive, stilted, with ridiculous dialogue that betrays the amateurish writing (almost nobody “proffers” and if they did they would do it multiple times in one book!).
A vague, undefined initial premise developed into an overly complex plot, made worse by the obvious desire of the author to make this an example of feminist literature. All she succeeded in doing was creating a rambling mess that used childish contrived plot devices to create a story that couldn’t stand up for itself.
If you want feminist literature, write a good story and populate it appropriately with strong female characters - among a complete cast, not as the ONLY characters. Otherwise the suggestion you create is that female characters can only be strong and real if there are no men in the story.
Awful. Avoid.

Surprised by not being surprised

I am notorious for figuring out the killer in mystery books and movies, and this book was no different. No spoilers here but I knew from very early on who did it. The surprising part of the experience was how enjoyable it was and how many other surprises delighted me. Definitely recommend.

WHY'D IT HAVE TO END!

This was a mystery I could read over and over again. I just wish there are more books like it. If there is, someone please let me know. I loved all the characters except for one, Margaret, and Grace was my absolute favorite. The idea of traveling back and forth through time is thrilling, but to do so to solve a murder made it that much better. I'm not giving up any details about it either. This is just a really great book that I highly suggest you dive into if, you're thinking about it, and you are clearly thinking about it because you're reading my review.😁 ENJOY!

Female-centric sci-fi with lesbians, time travelers, and POC. Amazing. This must be what straight, white men feel with every other book.

The story is a solid 4 but I gave it 5 because I have never read a sci-fi with so many female characters. It revolves around the granddaughter of a founding time traveler. It’s mostly a murder mystery in a time travel setting with a bit of psychology and romance thrown in. Worth the listen.

This novel hit so many of my sweet spots, it was just a joy to read. I didn't have any expectations going in but was tremendously pleasantly surprised, especially considering I usually avoid time-travel-plots like the plague.

I was so disappointed when I discovered that this author hadn't published more. I'll definitely be keeping tabs on her in the future!

Fast-paced, creative, engrossing. Get the audiobook!

The author’s imagining of the different social structures & mental states that spring from time travel is fascinating! The love story & the ending overall is quite satisfying. Get the audiobook— the voice actress does a splendid job of switching between disparate UK/European accents. Her reading is masterful. Highly recommend!

Enjoy a story about time travel?

The author has obviously put a lot of time into thinking about time travel. Any good time travel book that doesn't have characters examining free will is just sort of silly, which can be fine. But this book takes itself seriously and lots can be found in it's story.

Such a great story with an interesting twist on time travel! Pay attention to the dates given!

I was spellbound from start to finish. The story was masterfully mapped out, folding in on it's self over and over again, creating a completely unique take on the time travel genre. I loved it.