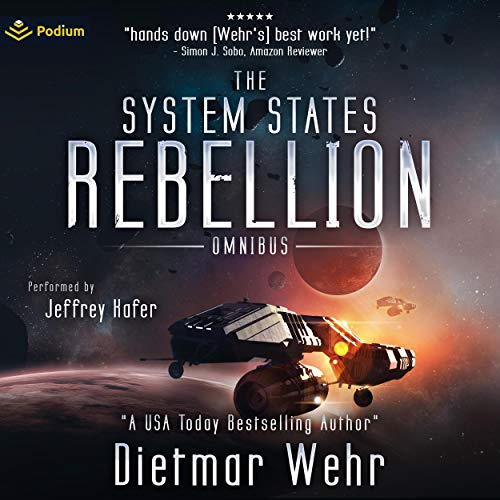 By: Dietmar Wehr
Narrated by: Jeffrey Kafer
Try for £0.00

Humanity has colonized over 500 planets under the not-always-benevolent administration of the Federation of Planetary States via the FED Army and Navy. Longstanding grievances over economic exploitation by Earth-based companies have grown into a full-scale rebellion, and attempted secession has been tried by many of the more successful colonies. The Rebels believe a peaceful separation is possible. The FEDs believe an easy and swift military resolution is available. Both dreams of glory are shattered by the reality of a civil war that is rapidly escalating in scope and violence.

The interstellar civil war between the breakaway System States Union and the Federation of Planetary States continues to escalate with the help of sophisticated planning computers on both sides. Rumors of Honor is military science fiction that includes space battles, ground battles, political maneuvering, strategic deception, personal triumphs, and personal tragedies. Watch as the necessities of war force protagonists on both sides to compromise their honor.

What listeners say about The System States Rebellion Omnibus: Books 1 - 2

The story has a lot of progress and innovation, which I do like. The characters, and their motivations did not interest me as they were mediocre and average in many respects. None stood out, they blended into one another.

I am going to compare this to another naval combat series, the one with Jack Geary who commands the lost fleet back through syndicate space and ends a war that's been ongoing for the past century. In that, the main planetary bombardment weapon is called a rock. It's a big slug of dense metal and kinetic energy does the damage. In this series, kinetic energy warheads are mentioned, but are treated as armour piercing ammo, much like how in ww2 warships would use AP or high explosive. This might seem like a nitpick, especially as this is the start of the war and thus everyone is coming up with new systems but if anything it's a good criticism. I'm that invested in the story where I wish the technical side was more thought out. Either way, I recommend this if space opera appeals to you.

i would have enjoyed this story more if the definition of what planet or ship they were on was made a little clearer.

I love cience fiction, but this seemed to me like a futuristic documentary. Too much explanation of planning, strategy, what if, how long, what is this and what is that.
Fisrt I thought it was just at the start to get you immersed in it more, but basically this whole thing through out 2 books..like reading a chess match in real time.

Today is not that day. Wehr is another in a long line of authors completely incapable of avoiding the peurile(if universal) trope of writing a scifi story with the shoehorned attempt at rewriting 2000 years of western civilization's sexual morality to allow promiscuous fornication, intentionally framed to inflame.

This particular book waited 14 chapters before giving in. ibe started to appreciate the authors who get right to the stupid, idiotic "sexy-fun-time" early, so less of my time is waisted.

Maybe, someday, Audible will allow people to search for works that don't fall into the tired and sophomoric trap of titillation. They'd get alot more money out of me.

Would you recommend this book to a friend? Why or why not?
The best way to explain this, without spoilers, is to compare it to playing chess with one's self. All of the action is there but the play is so very balanced it isn't interesting and you don't know for whom to root. Each stage of the war is viewed very pragmatically without anyone ever getting any real advantage... at least for some time. (no spoilers) Many people will like this series, but it was not among my favorites

That being said, Dietmar Wehr is a master storyteller in the Synchronicity Wars series. If you are looking for an extremely well written and engaging series, I recommend you start there. Or, another fantastic option is The Lost Fleet by John G. Hemry.

Now I feel like I need a Space Viking refresher!

This is a great piece of fan fiction that fleshes out the truly awesome universe created by H. Beam Piper, and sets up the early founding of the Sword Worlds. When I heard the words “contragravity” and “spherical spaceships” I was, like, WAITAMINUTE WHATTHEHELL ! ! ! And I just kept hearing more and more HBP-isms.

Love it. Mr. Wehr does an excellent job of telling his story in almost exactly the same style as Piper, too. Jeffrey Kafer, whom I’ve never listened to before, did sn excellent job, although his female voices were non-existent. However, I still hope he does Space Viking, it’s mostly dudes talking anyway.

I am probably going to buy the third book of this series.

So, a society can travel faster than light….spoiler alert. But only uses radar to spot enemy vessels in SPACE?!?!? No infrared, no magnetic or gravitational measurement. Just freaking radar. The same thing that the Brits invented in world war 2. So the rebels bet everything on a crazy risky manufacturing base Spending billions and decide not to have any protection, no defenses. Nothing. And oh by the way let’s build 5 seriously badass ships, but not finish the shielding. Repeat. We will build all 5 crazy amazing ships. Billions spent but make them all vulnerable to a single shot. All dead. Perhaps, a reasonable army would make one or two of them and finish the shielding. Such lazy writing. So frustrating. So close to being good. But so bad. I had to fast forward and skip to keep from losing my freaking mind. Why take the time to write a book and not just talk to an engineer or a physicist. So freaking lazy. Ugh. And each enemy had some freaking amazing deductive leaps. Oh…there is a sesame seed on the ground, the rebels must have been here…they must have been eating Big Macs…they must have been at that McDonald’s around the corner…they must be in an underground tunnel let’s bomb that. Great. They are all dead now. We are so smart. Good for us. So frustrating.

WHAT A BUNCH OF PATHETIC GARBAGE!!!

Dont waste your $$$$ on this book. The plot and storyline is so friggin ridiculous, convoluted, embarrassing and poorly written. I cant believe someone with a brain thought this book was worth writing and whats worse is others actually believed it should be an audiobook. There is more ignorance wrapped up amongst those nvolved with writing and publishing this book that it makes Congress look like they know what they are doing!! So much trash in one collection!!! Ive read better stories on bathroom walls!

horribly dated. this is the 1980s...but in space. the author lacks imagination and there is no world building.

Definitely a fan of Dietmar Wehr but not of the narrator's delivery.

First the Author. Mr. Wehr 's style of sci fi is often based on interplanatary space naval action. Some political machinations, but only as they serve to drive the ship action. Less character relationship, more science & technical orientation.

I'm not a science expert, but disclaimer aside, Mr. Wehr seems like he does his research & knows what he's talking about. His tech is believable. His space ships don't navigate on magic, they have a solid sounding background based on theoretically realistic principles & possibilities. And even a non-nerd likes me finds hearing about them interesting.

Now the narrator. To me, every character sounds the same which causes confusion as to who's talking. Whether in the middle of battle or describing the specifics of interstellar drives, delivery never fluctuates. Richard Burton reading the telephone book Jeffrey Kaffer(sp?) is not! BUT, Despite bad narration, the story survives & thrives. Some people actually like this narrator, (imagine that?!), so decide for yourself. Either way, the book's worth pursuing, so buy it!

This is one hard book to listen too. The performer is great. Just can’t get into the story.

Decent story but the dominated by strategy and technical info. 3 out of 5 stars.