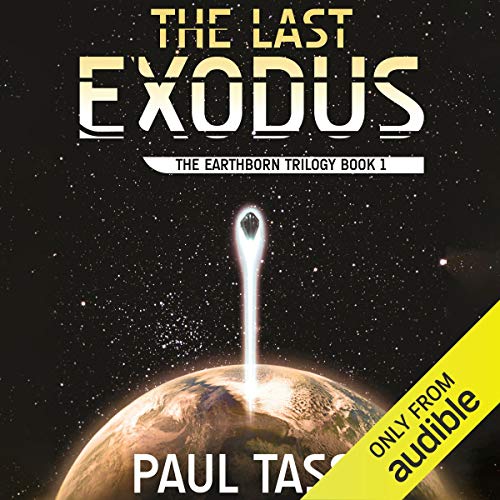 The Earth lies in ruins in the aftermath of an extraterrestrial invasion, the land devastated by a desperate war with no winners between mankind and a race of vicious, intelligent creatures. The seas are drying up while the atmosphere corrodes and slowly cooks any life remaining on the now desolate rock. Food is scarce, trust even more so, and the only people left alive all have done horrific things to stay that way.

Among the few survivors is Lucas, an ordinary man hardened by the last few years after the world's end. He's fought off bandits, murderers, and stranded creatures on his long trek across the country in search of his family, the one thing that drives him to outlive his dying planet. What he finds instead is hope, something thought to be lost in the world. There's a ship buried in a crater wall. One of theirs. One that works. To fly it, Lucas must join forces with a traitorous alien scientist and a captured, merciless raider named Asha. But unless they find common ground, all will die, stranded on a ruined Earth.

Combining gritty post-apocalyptic survival and epic space opera, The Last Exodus is the beginning of a new action-packed science fiction adventure where the future of the human race depends on its survivors leaving the past behind.

What listeners say about The Last Exodus

Thoroughly enjoyed this story and the narration was fabulous. Can’t wait to read/listen to the next.

Fully engaged from the start

I wasn't sure that I'd like this book not being a fan of post apocalypse stories because they are generally too depressing. This was different. It had great characters who had to overcome the impossible to survive. Great writing which for me means an author who can paint a picture in my head. Thank you.

No real feeling to the book. Characters are matter of fact cut outs announcing who they are and what they are doing. Couldn't make it very far into this

I was lucky to discover this book

Excellent story and good narrator. I didn't expect much from this book, but found myself entrapped in the story after giving it a chance. I'll be reading the rest of the series and I hope that the author (Paul Tassi) will continue writing more books.

The story had the potential for greatness. The plot advancement and the way characters solve problems is juvenile at points.

Competently written, with no glaring plot errors. A bit predictable perhaps, but not overly so. Fun action scenes, very much a swashbuckling space opera. The author let the story express some views on human nature and belief that I do not share, but the tone was never lecturing or preaching, something I found immensely relieving.

Enjoyed every minute of it. I can't wait for the next one to come out.

After "reading" several duds in a row it was refreshing to stumble upon a new author who actually had a ORIGINAL story on the end of the world.

I think there is potential for a great story. Unfortunately the story relies on a few key facts that are absolutely nonsense. The end of the book introduces more unjustified nonsense. I think that grounding the story in something more coherent and the end reworked without the nonsense would have made this book much better

One of the best books I’ve listened to on audible. Great narrator and the imperfect heroes felt like real people. Great option for fans of Scalzi. Can’t wait for the second one.

This was an amazing story, covering numerous sci-fi tropes in an unpredictable arc. Loved it!

Great book. With hero killer and now this i'm definitely a paul tassi fan. Narrator was great but i laughed a few times with alpha (you'll probably know why when you listen). This flew by and kept me engaged start to finish. On to book 2

This is an engaging book, an enjoyable read. However, in a Black Lives Matter era, the ending is extremely, alarmingly problematic. The story ends with massive apologism for slavery. I was shocked, and disgusted. im not sure which is more disturbing: if the author wrote it that way intentionally or if racist ideas are just that normalized. Its no good either way, as far as I'm concerned.