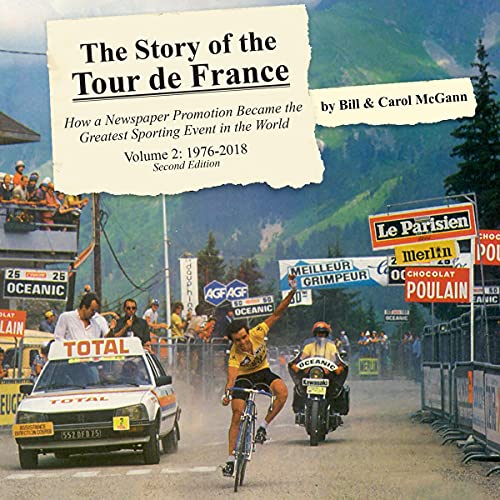 Volume one of The Story of the Tour de France concluded with Bernard Thévenet’s dramatic victory over Eddy Merckx in the 1975 Tour. Volume two opens with super-climber Lucien van Impe’s taking advantage of a course made for the riders with wings. His win was followed by the dominating presence of Bernard Hinault, who became the third rider to win the Tour five times.

Unable to fulfill his destiny as a likely five-time winner because of a hunting accident, Greg LeMond won the Tour three times. LeMond’s era was followed by that of the remarkable Spaniard Miguel Indurain, the first man to win the Tour five times in a row.

The late 1990s were a time of extreme crises for the Tour as the culture of doping within the professional cycling community erupted into the scandal of 1998. The Story of the Tour de France deals with this episode at length.

At first, it looked like Lance Armstrong had done what no other rider in the Tour’s history had ever accomplished: win the Tour seven times in a row. Both he and his successor Floyd Landis were revealed to have used drugs to win.

For decades, Great Britain was a marginal player in professional cycling, but no longer. British riders have become a dominating presence in recent Tours. The book concludes with a quest for the greatest ever Tour de France rider and an epilogue explaining the reason for the extraordinary success of the Tour.