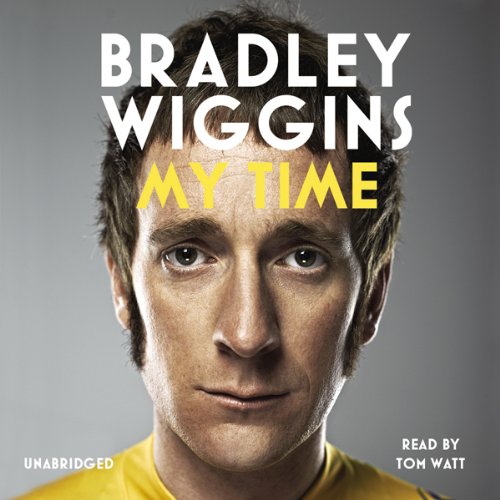 By: Bradley Wiggins
Narrated by: Tom Watt
Try for £0.00

Winner of 2012 BBC Sports Personality Of the Year

In My Time he tells the story of the remarkable journey that led to him winning the world’s toughest race. He opens up about his life on and off the bike, about the personal anguish that has driven him on and what it’s like behind the scenes at Team Sky: the brutal training regimes, the sacrifices and his views on his teammates and rivals. He talks too about his anger at the spectre of doping that pursues his sport, how he dealt with the rush of taking Olympic gold, and above all what it takes to be the greatest.

What listeners say about My Time

Better Than I Expected

I knew a bit about Wiggin's before this year's TdF win having followed the tour fairly closely since the mid 1990's. Whilst there was no doubting his talent, I had never found him all that likeable - he always seemed aloof and had a bit too much swagger for my liking. Having finished My Time, I have to say my opinion of him has changed. He comes across as very humble and grounded. Whilst he acknowledges that he doesn't suffer fools gladly and isn't especially comfortable with his new-found fame, it's hard not to admire his dedication to the sport. The narrator does a good job and sounds much like the man himself which helps.

Know nothing about biking but I was completely addicted to this because he is a normal, down to earth guy. Fantastic book.

Although Bradley does not narrate this book, the guy who does is excellent! He uses his voice to great effect so it's like listening to a tale told down the pub. Especially funny in my view is his great emphasis in profanity. I loved it!

So much better than I thought it would be.

What made the experience of listening to My Time the most enjoyable?

Really honest account, don't think his holding anything back and this came out in pretty quick order following the success of 2012 so I smelt a 'cash-in knocked another Bio out in five minutes' jobs but it was much better than that is a really good read.

What was one of the most memorable moments of My Time?

A good understanding of what its like to be inside the maillot jaune.

what a book could not stop listening from start to Finnish wish it was longer.

Great whether you’re into cycling or not

A great read/listen and it gives a great insight to the motivations of the man and what it took to get to the top of his game. He doesn’t dodge his poor attempts at press interviews or his early mistakes, but does give why feels like an honest account of himself.

Not sure I could ever see me riding Box Hill in 5 minutes though LOL !!

Great story about a fantastic year.

Brilliant reading. What a year that was. Definitely worth a read (or listen) this one! Everyone British loved that year and that event was just one of the highlights.

There wasn't much about his years growing up but that's the part we hate anyway. Brilliant book, in detail about his TDF and also his previous races / Olympics

What a truly inspiring book to listen to. I followed the both the Tour De France and the Olympics that year and this book brought back some very fond and inspiring memories. Just to see what Bradley Wiggins went through and the commitment involved is just unbelievable.
This book had me wanting to keep listening and now I'm just about to start listening to his next book.

inspired by this man doing some monumental things on the bike but the humble ness of him too.

Mixed up chapters. But interesting insights.

Would you try another book from Bradley Wiggins and/or Tom Watt?

Would you ever listen to anything by Bradley Wiggins again?

Yes, I will try again.

The accent was not Bradley. A bit frustrating.

If you could play editor, what scene or scenes would you have cut from My Time?

I would order the audio book as it was written. Having chapters playing out of order was very frustrating. As the mixup happened early in the delivery, the mix up was not obvious until I had listened to 80% of it. Very disappointing.

How do I get my money back?

Would you listen to My Time again? Why?

Yes. The details of his 2012 racing season including his TdF win and Olympic TT gold are vivid and rich. It feels like you sitting in his living room and he is telling you stories of his epic year. Includes detail about training, preparation, his family, the team and all his highs and lows.

Bradley Wiggins for obvious reasons. Its all about his road career in cycling.

His British accent is awesome for sharing Brad Wiggins' story

The deep insight into how he and his coaches went against tradition in their preparation for the 2012 racing season.

It's a great book that cycling fans will particularly enjoy.

After listening to Froomes "The Climb" I would expect Braddley's literally attempt to be entertaining, if not exciting.

Perhaps it's just me and my unfair expectations, but there is no mild way to put it: I found the story line just plain boring. Specially during the first third of it more or less.

The speaker seemed to have tried his best trying to instill some life to the story; at wich he succeeded to a certain extent.

Still waiting for a Cycling book in the league of Krabbés "The Rider" - now that's something I can listen and re-listen, and seemingly never get tired from.

A real story told by a real guy, has his feet on the ground, truly one of the great stories in modern sports...

Good book! Recommend this and Froome's back to bac

Yes, If they are into cycling!

What was one of the most memorable moments of My Time?

Describing his ride onto the Champs-Élysées

Which character – as performed by Tom Watt – was your favorite?

Tells an interesting "other side of the story" from Froomes book

Written from the heart

This book explains who Brad really is. His book is written with passion and is very informative. He has a really good knowledge of the history of cycling and he shares personal experiences and talks about his numbers to achieve his results. Definitely worth a read.

As insightful a cycling bio as you will find. Great read. Covers many aspects of training and racing that will be informative/instructive to all readers of a cycling background.

Very good Audiobook , the narrator gives an extra punch to the story .

I recommend the last 3 chapters .

Not bad for a ghost written piece.

As good an insight into cycling as you can hope from Mr Wiggins. Fairly egocentric and at times a little juvenile. Mostly about his feelings and not much about cycling. If you want to hear about cycling from a pro then The Obree Way by Graeme Obree is the best out of 10 cycling books I've heard on audible.

If you could sum up My Time in three words, what would they be?

A really great listen and loved the narrator. Read this book and read Chris Froomes book back to back and you will get a full picture! Loved it!

What other book might you compare My Time to and why?

Chris Froome: the climb. He talks about Wiggins and the tour and all that went behind the scenes....also a great read or listen!

He set the tone and attitude of Wiggins. Loved it.