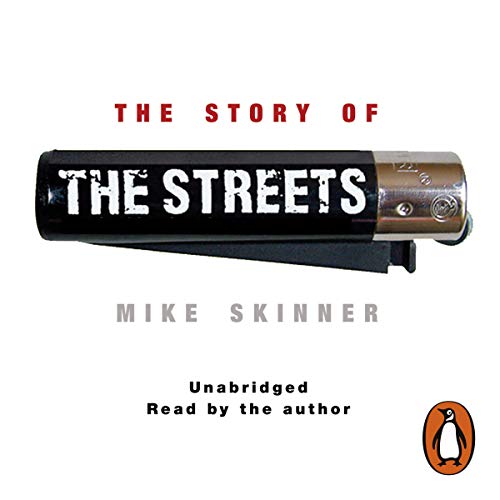 The Story of the Streets

Winner of the Best Book Award 2013 at the NME Awards

"This book is going to try and get as close as possible to the full story of what informed the noise of The Streets. Obviously that's something I should be fairly well qualified to know about, and I'm going to be as honest as the publisher's lawyers will allow."

With the 2001 release of The Streets' debut single "Has It Come to This?" the landscape of British popular music changed forever. No longer did home-grown rappers have to anxiously defer to transatlantic influences. Mike Skinner's witty, self-deprecating sagas of late-night kebab shops and skunk-fuelled Playstation sessions showed how much you could achieve simply by speaking in your own voice.

In this thoroughly modern memoir, the man the Guardian once dubbed "half Dostoevsky… half Samuel Pepys" tells a freewheeling, funny and fearlessly honest tale of Birmingham and London, ecstasy and epilepsy, Twitter-fear and Spectrum joysticks, spread betting and growing up. He writes of his musical inspirations, role models and rivals, the craft of song writing, and reflects on the successes and failures of the decade-long journey of The Streets.

"Cleverer, funnier, more illuminating and beautifully written than anything I have read in the longest time." (Decca Aitkenhead, Guardian)

What listeners say about The Story of the Streets

A hard way to make an easy living

No one sounds like Mike Skinner, and as his famous timbre begins, you do find yourself thinking, a 3 minute song is fine, but will I be able to stand a whole books worth of his monotone? And then you listen to what he's saying and you know that no-one else could read it. Every sentence about his music reminds you of the music itself, as his vocals *are* the streets. His words and the way he says them, that's what made me a fan in the first place.

This is a brilliant insight into the UK music business, from a man who is intelligent, articulate, humble when necessary, interesting, and above all, incredibly normal, with a brilliant, objective view on life, served with a slice of acerbic wit.

The Story of the Streets

Brutally honest, compelling and refreshingly free from b******t.
It's been a privilege to hear the story behind the music that has meant so much to me over the years from the man himself. Far from being a fly-by-night 'geezer', Mike Skinner is a grafter, a craftsman and an unashamed control freak.
Skinner's reading is, errrm, uncomfortable. It sounds like reading his book aloud is the last thing in the world he wants to be doing. But I get the impression he feels letting someone else narrate it instead would be an even worse option. I agree.
If you're a fan of The Streets I can't see how you would fail to get more form the music after listening to the story.
Recommended.

Very confusing....did he even write this at all???

If you're reading this review then you are interested in listening to mike skinner talk about being 'The Streets' and therefore you are aware of who The Streets are/is and again aware of the style of music he makes!! That was me last week when i noticed that there was an Audible version of his book, Great!!! I love his music and am/was interested in listening to his take on the last 18 years of music success plus how he got there pre 2002.
As you'll know, The Streets is, by and large, spoken word over beats, garage-esq music. Mike Skinners style of rap is almost to just talk over the music he's made, and this is where the wheels fall off. Mike self narrates his own story, his own book but it pretty quickly becomes clear that Mike is'nt the best at reading. He's reading his own words from his own book in what should really be just an extension of all of his music....but he cant. When he's reading a sentence, for example 'i walked into the studio and started to make music with some of my friends', he reads it in a way a 9 year old would. Slow, monotone "i........... walked...............................into.........................the........studio.......................and........................started...............................to" and so on. There are some funny lines which he just fumbles over in his monotone delivery and their are numerous times where the tone of his reading states that he's come to the end of a sentence only for him to realise that the sentence continues on the next line. This came as quite a surprise to me as he was basically struggling to do what he's being doing so amazingly well for 18 years......and its his own life he's talking about. Its like finding out that Michael Jordan can't catch a frisbee or Elton John cant play an electric piano!!!.....and when the story is over 7 hours long it gets a bit grating after a while and unfortunately i turned it off.
Story wise, if you want to hear about his songs the who's and why's of each track then you'll be, like me, disappointed. If you want to hear about the dimensions of his first London flat or his thoughts on Burberry then you're fine. You may think that i'm being overly critical, maybe even cruel about Mike's reading but he should be able to do it in regards to his day job. There may be some grammatical errors in this review of mine but i'm a fireman not a writer but i'm ok with ladders and heights and therefore my work skills are exchangeable between work and home, something that mike strangely cant do.
All in all i was very disappointed and wont be finishing it.

Entertaining story...Skinners voice not so...

If you can overcome Skinners voice then it's a great story. I got to the end but it was a struggle.

Should've got someone else to narrate it

I am not a huge Streets fan but I like them enough to be interested and I was not disappointed. I felt Skinner told an insightful story about the 5 albums from The Streets. He comes across as humble and honest without any silly showbiz gossip, no self-indulgent stories of crazy parties and no bad mouthing any contemporaries (apart from one). He talks about song writing and structure in a way that I never appreciated and I intend to go back and re-visit the albums with this insight.

HOWEVER! I wish he hadn't read it himself as he is truly a terrible narrator! For a guy who raps on songs and is a good laugh in interviews I've heard with him, he is articulate and amusing but all of this is lost in the dreadful monotone with doesn't abate for the entire 7 hours! If you can stick with it it's worth it but if I were you, I'd buy the book and read it yourself. At least listen to the sample first.

Really enjoyed this one. Mike Skinner is quite the philosopher and is a funny man at times. Would recommend this book whether you love his music or not. I haven't listened to much of his music but I'm gonna catch up because he is definitely a man who has something to say.

If you like listening to the streets you will really like the book and Mike reading it. You will go back over a few songs/albums after.

As a fan, I was intrigued but didn't expect such honesty and depth ~
great guy!

An interesting listen from start to finish. A great glimpse into the music industry and into Mike Skinner’s early career and personal life.

The book is fascinating, such an interesting story with hilarious and insightful anecdotes.

Unfortunately Skinner's performance lacks a lot of the charm you see in interviews, with the monotony of his delivery especially evident when delivering comedic lines.

I would still definitely recommend this as it is such an interesting and well written book. If I decide to re-visit it, I may read the book and imaging Mike Skinner's voice!

Wonderful to get to know Mike through this book. He tells his story brilliantly. Will re listen for sure

Definitely a great audio book in which Skinner speaks of his troubles and experiences throughout The Streets.