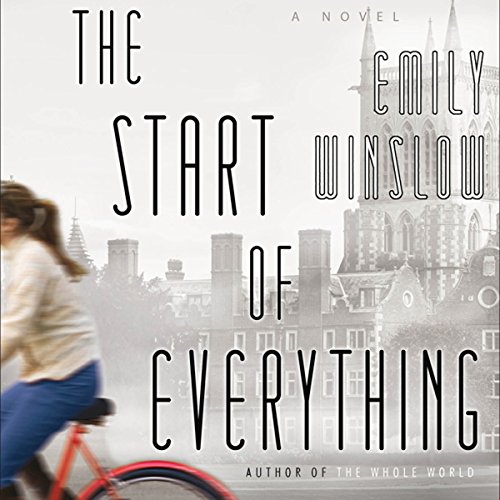 The Start of Everything

By: Emily Winslow
Narrated by: Sheila Burminham,Stephen Hoye
Try for £0.00

In this stunning psychological thriller for readers of Tana French, Kate Atkinson, and Donna Tartt, Emily Winslow has crafted a literary prism told through the eyes of her many intricately drawn characters. Masterly and mesmerizing, The Start of Everything will captivate until the very last minute.

Cambridge, England: Outside the city, the badly decomposed body of a teenage girl has washed up in the flooded fens. Detective Inspector Chloe Frohmann and her partner, Morris Keene, must work quickly to identify the victim before the press takes off with the salacious story. Across the hallowed paths and storied squares of Cambridge University, the detectives follow scant clues toward the identity of the dead girl. Eventually, their search leads them to Deeping House, an imposing country manor where, over the course of one Christmas holiday, three families, two nannies, and one young writer were snowed in together. Chloe Frohmann begins to unravel a tangled web of passions and secrets, of long-buried crimes and freshly committed horrors. But in order to reveal the truth - about misaddressed letters, a devastating affair, and a murdered teenager - she may have to betray her partner.

"Emily Winslow effortlessly weaves together separate lives with intertwined lies, creating a powerful web of small deceits and horrifying misdeeds. The Start of Everything is a must [listen]!" (New York Times best-selling author Lisa Gardner)

What listeners say about The Start of Everything

I have never written a review before but felt that I had to review this. The story is quite good, interesting etc BUT I am sorry to say the readers leave a lot to be desired. A man and a woman, cannot tell one character from another. So glad I have not bought this at full price, they are awful. Avoid.

I did something I have never done before with an audible book, I went back to the beginning, when I came to Part 2. Now whether it was because my listening attention was not as focused, due to activities. like walking two disobedient dogs, or, because I underestimated this book, I am not sure. I actually went back to check one thing, and just went oh well, I may as well just listen to it from the start. It was a decision I did not for one moment regret.

This is a wonderfully complicated, intricate, exploration of individuals, motherhood, families, and nannies, all set in the academic world of Cambridge.
I loved all the twists and turns. There is more than a murder to unravel in this book. The different narrators all give testimony sometimes, credible, other times, unreliable or inaccurate. I found Matild, the girl who suffers from Asperger or some other related disorder, compelling as she blindly blunders right into danger. There was also, drama and pathos in her quest to reunite the letter and make some connection of her own. Ultimmately Chloe is the most informed and clear sighted. It all comes together, in jigsaw pieces to it's final and surprising revelations.

I can not recommend this book highly enough to mystery and contemporary fiction readers alike. It is superbly written, fraught with tension and a finely wrought portrait of fully realized characters.

I look forward to seeing more from this writer!

The plot was rambling and the narration horrible, all characters sounded the same; don't waste the credit

couldn't get through the second chapter

I believe the main character (narrator) was supposed to be autistic/ have aspergers but instead of using this to add depth to this character it became a huge distraction from what may have been a good story. All of the character's thoughts centered on sensory issues and fixations- as if people on the autism spectrum have no personality beyond this. It made it a very difficult listen especially when the other narrator was given depth and personality emphasizing the shallowness of the first narrator. Giving a character Aspergers instead of a personality is insulting to the reader and to the autistic community, one does not rule out the other!

I'm not sure why, but this book was hard to follow for me. it was okay

This story is not as straight-forward as most mysteries. it's well-written and engaging. Great narrators.