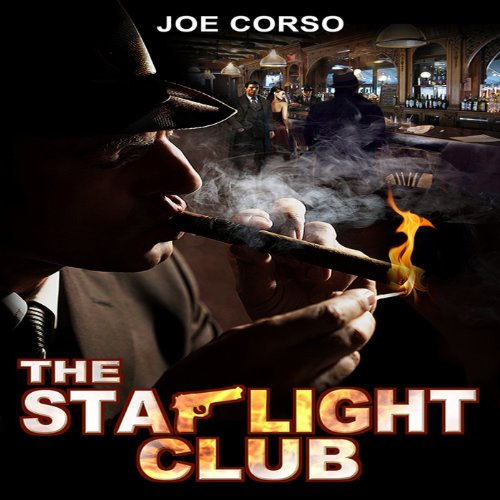 Caution: The names have not been changed to protect the guilty

The Starlight Club was jumping. "They looked like mob guys. They had that arrogance exuded by those who liked to intimidate - those who were the proud purveyors of fear." Amidst the nightly gaiety was the back room, where business deals were made, hits were ordered, and territories were divided. Trenchie, not being a 'rat' is just released from his ten-year prison sentence. A new life is waiting - complete with envelopes of money and a steak house to call his own. He finds the woman of his dreams who brings along ex-husband baggage.

Hitman Jimmy 'The Hat' finds unexpected fame and fortune in Hollywood, yet always stays true to the 'boys,' especially Trenchie. His loyalty costs him his life. 'Crazy Joey Gallo' and his brothers break away from the Profaci family and go rogue on their own now. They split their gang into several small groups and spread them out over the five boroughs. "Harsh punishment awaits those who talk." The colt 45 caliber bullet did its deed, taking with it a sizable portion of Rag's brain, forming a pink mist, mixed with bone and grey matter that puffed in front of Rag's head like a small mushroom, deflating when it met the chilly evening air. The current would carry his body at least a mile away.

What listeners say about The Starlight Club

Tell Red it was nothing personal. Just business.

Taking his daughter to see where the Starlight Club used to be, he reminisces for the very first time about who and what he'd seen there half a century before, in Queens in the early 1960s. The club had been a centre of business for Red, and those closest to him in a mob fami!y business. There is a strange mixture of friendship, almost love, and violence, used, when necessary, in the furtherance of business, namely making money or keeping true to their own code. The characters are all colourful but feel very real, human, in a very male oriented world and although several stories are told, the centre around Trenchie, a made man, who has just been released from a ten year prison sentence for something he had not done, but was covering for his boss. This was a wonderful book. Well written, it escorts the reader around the area, meeting people, some of whom are actual historical characters, following some weird incidents, even going to Hollywood. There is a lot of action but very little of the violence one might expect from a gangster book. No, the joy comes in actually getting to know these people, almost like being a frequent attended at the Club itself. The narration by Christopher Strong was a perfect fit. His voice is nicely articulated, well paced and steady. It has a definite noir feel tumbling from the reading. And he also voices each character with individual attention. It is an unhurried reading - not slow - which adds to a feeling of time and place. A fine performance. I have only recently noticed that other titles have been written in this series although the original intention was that it would be a single, stand alone story. Wonderful. I look forward to reconnecting with these strange, ruthless but somehow rather amiable people.

What did you love best about The Starlight Club?

This audiobook was a thoroughly enthralling, filled with amazing characters like Big Red, Trenchie and James Roman (at the time the latest movie idol).There’s even a guest appearance from George Raft!

I thought that Christopher Strong's voice complimented the time and mood of the book perfectly.

The essence of life in Queens is captured at a time of great unrest and warfare, where murder was not personal – it was just a job, which had to be done.

Set in present day. Robert ‘Bobby’ Valentine has asked his daughter to come to New York so he can tell her about his life...Sitting in an Italian Restaurant, which used to be The Starlight Club, he looks back over the years, and reminisces about life in Queens in the early 60’s and the people who lived there.As the story unfolds we find ourselves drawn into events at the club, we’re permitted through the power of the story to go back in time and take a glimpse into the hard world of the Mafia families.

The Starlight Club written by Joe Corso, and read by Christopher Strong is the first of four books released as an audio book through audible.com. The Starlight Club in the Borough of Queens in Corona, New York is a Club that in 1961 was a place where movie stars, politicians, and even some gangsters came to dine.

The story is told through the remembrance of 70 year old Robert Valentine, or Bobby as he was known. Just a young man with a wife, two kids and a daughter on the way that worked delivering meat to the neighborhood and sometimes drove a taxi for extra money.

Bobby was liked by the owner of the Starlight Club; Big Red and fellow patrons Trenchie, Jimmy the Hat, and others. Bobby would stop by after work and have a drink and listen to the stories and goings on at the club. The fond memories of Bobby's time spent with the rough men who would become his friends is shared with his daughter Lynn years after the Club is gone and has become a Hispanic Owned - Italian style - deli.

Bobby's story is an exciting and thrilling ride through the shifts of power in New York's Five Boroughs and is an easy listening, and attention grabbing audio book that will keep you listening and leave you wanting more.