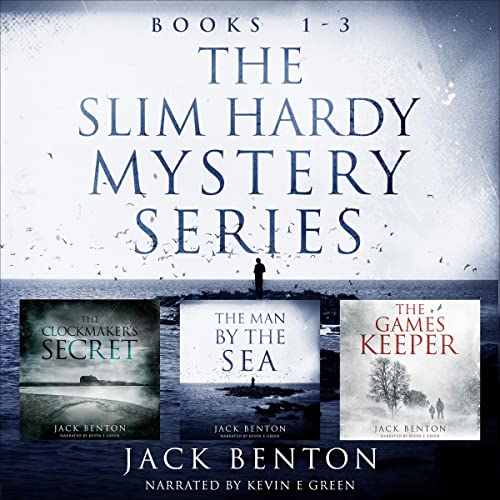 The first three Slim Hardy mysteries, collected together for the first time:

The Man by the Sea

John "Slim" Hardy, heavy drinker and disgraced soldier turned bumbling private detective, is hired to investigate Ted Douglas, an investment banker who slips out of work every Friday to visit a desolate cove on the Lancashire coast. There, he walks to the shore, opens an old book, and begins to read aloud. His wife thinks he's having an affair. Slim thinks he's insane. The truth is more incredible than either could imagine.

The Man by the Sea is the sensational debut novel by Jack Benton, a classic story of love, betrayal, murder, and intrigue.

A buried clock holds the key to a decades-old mystery. On holiday to escape the nightmares of his last case, disgraced soldier turned private detective John “Slim” Hardy comes upon something buried in the peat on Bodmin Moor. Unfinished and water-damaged but still ticking, the old clock provides a vital clue to an unsolved missing-persons case. As Slim begins to ask questions of the tiny Cornish village of Penleven, he is drawn into a world of lies, rumors, and secrets - some of which the residents would prefer to stay buried. Twenty-three years ago, a reclusive clockmaker left his workshop and walked out onto Bodmin Moor, taking his last, unfinished clock with him. He disappeared. Slim is determined to find out why.

The Clockmaker’s Secret is the stunning sequel to Jack Benton’s acclaimed debut, The Man by the Sea.

Having fallen on hard times, disgraced soldier turned private investigator John “Slim” Hardy is hired by rich and enigmatic land owner Oliver Ozgood to uncover the identity of a mysterious blackmailer. The man is demanding a fortune in exchange for his silence. He claims to be Dennis Sharp, a former employee of Ozgood, and threatens to reveal secrets that will destroy his family and send him to prison. The only problem is that Dennis Sharp is long dead. Oliver Ozgood killed him.

What listeners say about The Slim Hardy Mystery Series: Books 1-3