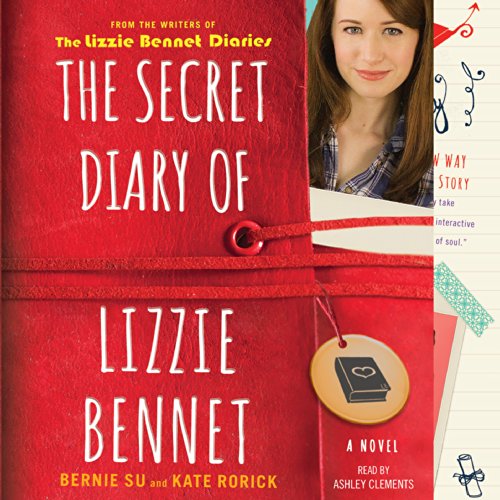 The Secret Diary of Lizzie Bennet

A modern adaptation of Jane Austen’s Pride and Prejudice based on the Emmy Award-winning phenomenon, The Lizzie Bennet Diaries.

There is a great deal that goes into making a video blog. Lizzie Bennet should know, having become a YouTube sensation over the course of her year-long video diary project. The Lizzie Bennet Diaries chronicled Lizzie’s life as a twenty-four-year-old grad student, struggling under a mountain of student loans and living at home with her two sisters - beautiful Jane and reckless Lydia. What may have started as her grad student thesis grew into so much more, as the videos came to inform and reflect her life and that of her sisters. When rich, handsome Bing Lee comes to town, along with his stuck-up friend William Darcy, things really start to get interesting for the Bennets - and for Lizzie’s viewers. Suddenly Lizzie - who always considered herself a fairly normal young woman - was a public figure. But not everything happened on-screen. Luckily for us, Lizzie kept a secret diary.

The Secret Diary of Lizzie Bennet provides more character introspection as only a book can, with revelatory details about the Bennet household, including Lizzie’s special relationship with her father, untold stories from Netherfield, Lizzie’s thoughts and fears about life after grad school and becoming an instant web celebrity.

Written by Bernie Su, the series’ executive producer, co-creator, head writer, and director, along with Kate Rorick, the novelist, TV writer, and consulting producer on the series, the novel features a journal-entry format and design, complementing the existing web series, while including plenty of fresh twists to delight fans and new readers alike. The Secret Diary of Lizzie Bennet expands on the phenomenon that captivated a generation and reimagines the Pride and Prejudice story like it’s never been done before.

What listeners say about The Secret Diary of Lizzie Bennet

What did you like most about The Secret Diary of Lizzie Bennet?
The performance by Ashley Clements is simply outstanding. I also liked that they addressed some of the criticisms of the show by opening the world to beyond the webcam.

What other book might you compare The Secret Diary of Lizzie Bennet to, and why?
The Epic Adventures of Lydia Bennet (well if Audible UK let you buy it...)

Which character – as performed by Ashley Clements – was your favourite?
My favourite character is always going to be Lizzie but I also love her Charlotte, Darcy and Gigi a lot

Was there a moment in the book that particularly moved you?
The reconciliation between Lizzie and Lydia

Any additional comments?
Probably only worth it for big fans of the original web series but it deepens the original story about as much as it can given the diary format.

What can I say? I love The Lizzie Bennet Diaries and the spin it took on Pride and Prejudice, ultimately one of my favourite books. Knowing that Ashley did such a great job as Lizzie on the videos was good for me coming in to the audiobook as I can get a little finicky when it comes to the narration of certain stories. I am hugely impressed with the adaptation and the enhancement of particular characters, especially Lydia and Mr Bennet who seem to have a greater role in the story and a more fitting ending. Definitely an adaptation I would highly recommend.

Really disappointing. A bit fan of the LBD, but this was so dull and went on forever. I find all the school jargon unnecessary too.

A lovely addition to the LBD universe

Would you consider the audio edition of The Secret Diary of Lizzie Bennet to be better than the print version?

What was one of the most memorable moments of The Secret Diary of Lizzie Bennet?

The Letter. THE LETTER.

Who was the most memorable character of The Secret Diary of Lizzie Bennet and why?

Caroline gets a significant amount of depth added to her, which really rounded out her character.

I would definitely recommend this audiobook, offers a ton of new character insight and plenty of Dizzie feels.

Must Read for Lizzie Bennet fans.

What does Ashley Clements bring to the story that you wouldn’t experience if you just read the book?

It is definitely worth while to listen to Ashley Clements because it makes it that much more real to hearing the in-depth story of Lizzie's life throughout her video diaries. Being based off of a video series, hearing the voice of the character brought a whole other dimension to the book, almost like watching new content. I cannot imagine if they would have chosen anyone other than Ashley to narrate the story. Ashley Clements did a great job at impersonating the many characters in the diaries. She is fantastic.

If you think it's just the videos in book form, you'd be surprised. It retells the story while putting a fresh spin on it with different insights to what did happen off screen. The book managed to keep the essence of all of the characters and the story itself. It is really unique to have a book based on a video series and not the other way around, and the writing and narration made it come to life.

At first I was wary of this book being a repeat of the videos I love so much, but it really does add an extra level to the story.

I loved Ashley Clements as the narrator and just got sucked right back into the universe. Hearing "Lizzie" reading her own diary aloud was a roller coaster of emotions.

If you loved the web-series I truly recommend you read this book.

I am a late comer to the Lizzie Bennet Diaries. I didn't realize it was a youtube series until I we recommended this book by Audible. It's true to the "original" Austen story, but there was enough originality that I was vested in the characters and truly interested in what happened to the Bennet sisters.

This is a version of Pride and Prejudice that I love. Of the modern interpretations I have seen or read, I find this one to be truest to Jane Austen. This Elizabeth Bennet is bright, funny and a feminist. It is narrated by the actress who played Lizzie in the original series, which won an Emmy Award! She sounds intelligent, and at appropriate times, very funny. I can't enjoy an audiobook if I don't love the voice of the narrator, and I love Ashley Clements' voice. I hope she narrates more books.

Witty Modernization of a Classic

I greatly enjoyed this audio book. Its modernization of Pride and Prejudice is very clever and believable while keeping close to the original plot. While listening to the audio book, I usually had a smile on my face enjoying the story and often laughed out load. The narrator, Ashley Clements, was terrific and was able to portray all of the characters in ways that made each a distinct personality while being recognizable from the Jane Austen classic.The idea of having a complementary web video of the same name on YouTube greatly enhanced the experience (I do not know which came first, the book or the video). Ms. Clements played Lizzie Bennet in the web video and her dual roles linked each short web video and its corresponding explanatory diary chapter in a way that provided greater depth, continuity, and understanding to both. I highly recommend this audio book.

Maybe I hold P&P in too much regard. At any rate, this was a waste of time. Characters were insipid, plot-boring....returned for a refund after a few tedious chapters.

I have not found a modern P&P tale as true to the original spirit and plot as this one (except for humanizing Lydia, which is a huge bonus). This novelization of the web series was a great blend of the original story and extra information that couldn’t be shared on the videos. Ashley Clements is the perfect narrator. Highly recommend!

Just as good as the videos! Definitely something to read along with the videos! Give way more background than the videos can provide, but also just enough that both contents don't over do each other.

Loved the book, the audio was great too

I read and bought the book, later I got this to hear Ashley speak it.