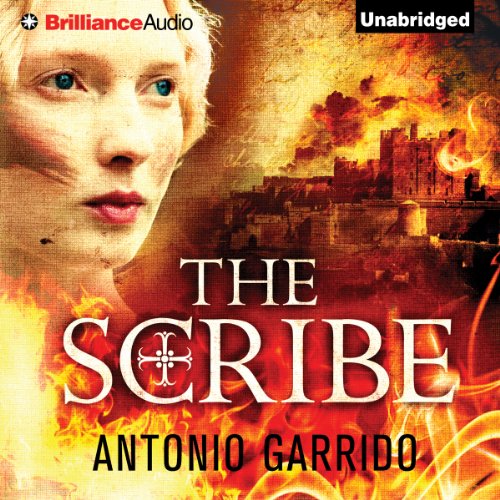 In eighth-century Austrasia, a spirited girl in the town of Würzburg brashly defies convention by pursuing the time-honored art of parchment-making. But Theresa's dreams are shattered when unimaginable tragedy strikes, forcing her to flee and tearing her family apart.

Set adrift as a fugitive, Theresa relies on her uncommon education and the sympathy of strangers to survive. When she encounters Alcuin of York, a shrewd and influential monk with close ties to King Charlemagne, she hopes her luck might have finally changed. Yet all is not what it seems.

As the mystery builds, Theresa discovers that the ultimate secret may reside in a parchment Charlemagne himself commissioned Theresa's father to write. Thrust into a political web of deception and danger, the daring young woman must outmaneuver a monarch and risk the fate of an empire to save her family.

The story keeps you in suspense always wanting to know what happens next. This was the first time I have listened to Tanya Eby and I thoroughly enjoyed her characterizations.

Is a well narrated story that will transport you to the 700s. It inspire me to do more research about the towns that are mentioned.

Wonderfully written I cheered for the heroine at every page. The book is fast yet like a dip into slower times. Worth a read.

If the story had not intrigued me so much, I would've stopped listening because of the narrator. I recommend reading this book to avoid listening to her nasal, ridiculous attempt at a male voice. Really good book!

Not to give too much away.... hint very small spoiler alert. I never thought the story would kill off the main character in the beginning. The story took turns I did not see coming. I hate stories that you can see the next three turns in the tail. This story keeps you wanting more. I even wanted more of t he normal day life at the end of the book.