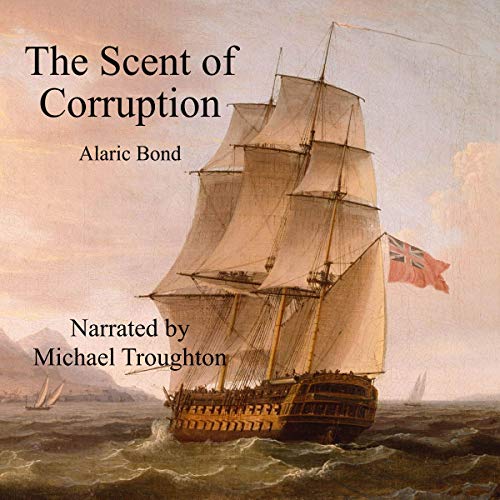 The Scent of Corruption

Summer, 1803: the uneasy peace with France is over, and Britain has once more been plunged into the turmoil of war. After a spell on the beach, Sir Richard Banks is appointed to HMS Prometheus, a 74 gun line-of-battleship which an eager admiralty loses no time in ordering to sea. The ship is fresh from a major re-fit, but Banks has spent the last year with his wife and young family: will he prove himself worthy of such a powerful vessel, and can he rely on his officers to support him?

With excitement both aboard ship and ashore, gripping sea battles, a daring rescue, and intense personal intrigue, The Scent of Corruption is a non-stop nautical thriller in the best traditions of the genre.

What listeners say about The Scent of Corruption

Mr. Bond delivers again. His Fighting Sail series is a must-read for anyone interested in nautical fiction. He populates the wooden world of the British Royal Navy with a pleasing array of believable characters. As always, he has many point of view characters, but the reader will not find them easily confused. His ship-to-ship action is well written and understandable. In a genre over-saturated by Royal Navy tales, Bond always makes his stories stand out.

I read author Alaric Bond's "The Scent of Corruption" on Kindle in 2015 and gave it a 5 star review. I've just finished the recently released audiobook version and found my earlier review has been upheld by this new addition. A well crafted yarn woven with authentic facts, believable characters and continuous action. Now add a true fact of human nature: "It's nice to be read to".

Brings to life a Royal Navy ship of the line,

Having read and enjoyed the entire series, I was pleased when two of them became available in audio format. Although I know how the various subplots resolve, the narration gives a whole new dimension to the world the author has created. Alaric Bond's Fighting Sail Series differs from other naval fiction set during the Napoleonic Wars in that instead of a single protagonist (male, rising young commissioned officer, in most cases) this author recreates the entire ship and company. The large cast must have been a challenge for the narrator, Michael Troughton, but he does an amazing job differentiating. I gave the performance four stars instead of five only because some of the voices of the characters I have come to know did not sound as I had imagined them in my head. That is entirely subjective, I realize. Michael Troughton reads the narrative magisterially, though at times I was hoping for a little more feeling but he keeps a steady course - and voice. The story weaves together several subplots involving the officers of the quarterdeck, the warrants, and the men sailing before the mast. Even the man in charge of the live poultry plays his part. You will learn quite a lot about the day to day details of living aboard a British man-of-war and about how Royal Navy impressment operated during this time period. You will also get a realistic idea of the few women who were aboard many of these navy ships. In fact, "The Scent of Corruption" is like an audio version of Stephen Biesty's book, "Cross-Sections: Man-Of-War", but with characters and plots. Historically accurate in minute detail, it's like traveling back in time. Highly recommended!