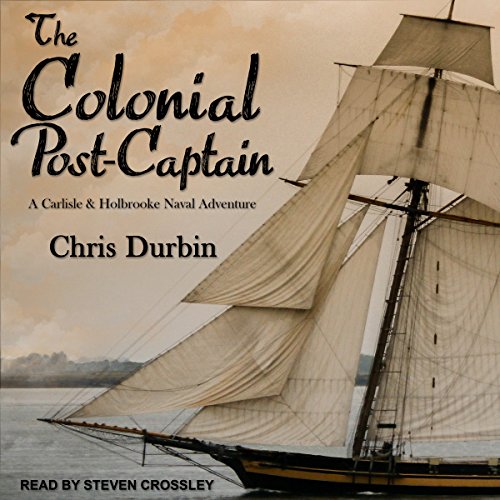 By: Chris Durbin
Narrated by: Steven Crossley
Try for £0.00

The Western Mediterranean, 1756. An uneasy peace is about to be shattered as France's greatest living general prepares an invasion force in Toulon, but where is it bound?

Captain Carlisle hails from Virginia, a loyal colony of the British Crown. As the clouds of war gather, Carlisle's small frigate - Fury - is ordered to Toulon on a reconnaissance mission. If battling the winter weather in the Gulf of Lions is not a sufficient challenge, Carlisle must also juggle the delicate diplomatic issues in this period of pre-war tension while contending with an increasingly belligerent French frigate.

But Carlisle has additional problems unique to his colonial origins: He has no professional or political sponsors and an uninspiring group of followers, both of which are essential to a mid-18th century naval career. How can a penniless second son from Virginia overcome these crippling deficiencies?

George Holbrooke, Carlisle's reluctant master's mate, cannot disguise his lack of enthusiasm for the tedium of the peacetime navy. His attitude changes as he experiences combat and personal danger, but can he persuade his captain that he has turned the corner? And can he achieve that vital promotion to commissioned status?

And then there is the beautiful Chiara Angelini, pursued across the Mediterranean by a Tunisian corsair who appears determined to abduct her, yet reluctant to shed blood. Can Carlisle solve this mystery and protect Chiara?

Fury shadows the French fleet as it sails from Toulon and reveals its true destination. Carlisle and Holbrooke are witnesses to the inconclusive sea-battle, which leads to the loss of Minorca, and engage in a thrilling and bloody final encounter with the French frigate.

What listeners say about The Colonial Post-Captain

It’s not awful, but is pretty close to it

If I were you, I’d save your credit and listen to something else.

A pleasant surprise. Good fast moving story. Crossley is faultless as ever. keep it up.

It’s hard to find an 18th century English Naval series that can hold it’s own to the Hornblower saga or the O’Brien classics. However, this series is pretty well done. The character of the mildly self doubting Captain and his resolve to overcome difficulties is not overplayed. The author knows his stuff, regarding sailing ships and the Royal Navy, in it’s day.
Well worth your time.....

An excellent look at historical events as they might have happened through the eyes of fictional characters contemporaneous to events.

Hopefully the start of a classic series.

A well written story, with the potential to become a classic, along with Aubrey, Hornblower, Ramage, Kydd, etc.
My only (minor) gripe is that the narrator (a favourite of mine) did not seem to be quite at his (usually stellar) best.

A well written book set at the beginning of the seven years war. I greatly enjoyed the setting, the descriptions and the plot. The characters all have a depth and the pace keeps shifting from relaxing to tense. The ship life and maritime aspects are spot on and the historical facts are well connected with the plot of the book. Downloading book two right away!

The Fury lives up to her name!

Wonderful book and story with a clear plotline and I loved the tie in with Byng and his misfortune!