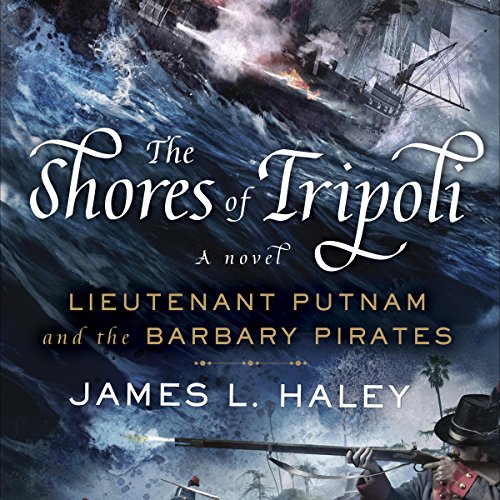 The Shores of Tripoli

The first novel in a brilliant new series by award-winning historian James L. Haley, featuring young midshipman Bliven Putnam as he begins his naval service aboard the USS Enterprise.

It is 1801, and President Thomas Jefferson has assembled a deep-water navy to fight the growing threat of piracy, as American civilians are regularly kidnapped by Islamist brigands and held for ransom, enslaved, or killed, all at their captors' whim. The Berber States of North Africa, especially Tripoli, claimed their faith gave them the right to pillage anyone who did not submit to their religion.

Young Bliven Putnam, great-nephew of Revolutionary War hero Israel Putnam, is bound for the Mediterranean and a desperate battle with the pirate ship Tripoli. He later returns under the legendary Commodore Edward Preble on the Constitution and marches across the Libyan desert with General Eaton to assault Derna - discovering the lessons he learns about war and life are not what he expected.

Rich with historical detail and cracking with high-wire action, The Shores of Tripoli brings this amazing period in American history to life with brilliant clarity.

“The history is thoroughly researched, the fiction inventive, the style at once easygoing and rapid.... This is a marvelous and richly enjoyable novel, and the intended series to follow promises to do for the American Navy and the Marines what C.S. Forester and Patrick O’Brian did for the Royal Navy.... More, please.” (Wall Street Journal)

“James L. Haley has taken the naval adventure genre to places it has not gone before, filled with strong, believable characters who nearly jump of the page, deeply researched details of life both here and abroad...and a powerful, sweeping view of one of the seminal events in the early history of our country...a rollicking good time.” (Brian Kilmeade, author of Thomas Jefferson and the Tripoli Pirates)

“It's a rare novelist who has a commanding grasp of history, and it's a rare historian who has an intuitive understanding of how to bring fictional characters to life. Fortunately for us readers of the Shores of Tripoli - and (please!) of the next book about Lieutenant Bliven Putnam - James L. Haley fuses historian and novelist into a spellbinding storytelling whole. There could be no better captain to sail this ship.” (Stephen Harrigan, best-selling author of The Gates of the Alamo and A Friend of Mr. Lincoln)

What listeners say about The Shores of Tripoli

I have long enjoyed naval stories from this era and this story is no exception I did find the narrator's style and inflections a little off.

Listen to the sample

Perhaps then you will avoid wasting your money. Very poor performance. I'm sure a different person reading the story would make a huge difference. I will now have to buy a printed copy to see if the book itself is any good.

Good combination of fiction and history of the war and Mediterranean history. Language and narrative are well done

I’m not sure if it’s the writing or the narration, but it was often agonizing for me to listen to. Half the time I felt like I was listening to Mr. Roger’s Neighborhood

Inside view of the development of an American hero. Well read and enjoyed Lt Bandy’s Southern accent

The shores of Tripoli

A very interesting book also a lot of history in it,to view the time of 200 years ago.

Great story about the barbary pirate war. I enjoyed it. Follows history very well. I would recommend this book.

The hero sounds ready to burst into tears the whole time. I doubt whether the familiarity he displays with his superiors would have been tolerated. The story gets stuck with syrup laden conversations between the hero and his female friend.

Just a great listen for someone interested in the time and history of the navy.

A fascinating account of the operations if the fledgling US Navy. The author has obviously done extensive research and integrated it deftly into a superb Naval action tale.