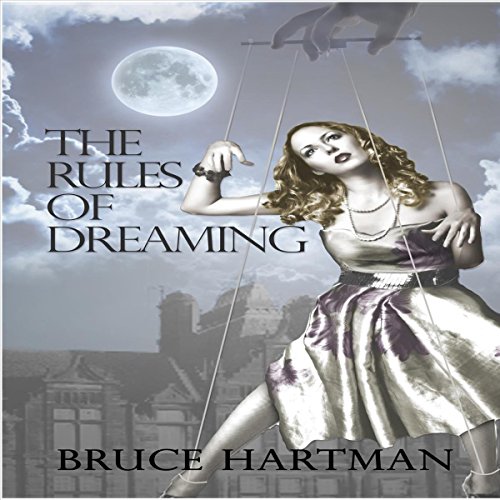 The Rules of Dreaming

By: Bruce Hartman
Narrated by: Neal Arango
Try for £0.00

Awarded the Kirkus Star for Books of Exceptional Merit

Nicole P. is an Irish graduate student pursuing a doctorate in literary theory in New York. She checks herself into the Palmer Institute (a posh upstate mental hospital), seeking help with anxiety and disorientation triggered by a recent breakup and her quest for a dissertation topic. But by the time she’s discharged two weeks later, her life has become dangerously entangled with those of her psychiatrist, who has fallen in love with her, and two schizophrenic patients, Hunter and Antonia Morgan, 21-year-old twins whose mother, Maria Morgan, committed suicide seven years earlier. Maria Morgan’s suicide has cast a spell over the Institute, enmeshing everyone there in a world of deception, delusion, and death. Prompted by a blackmailer named Dubin, Nicole realizes that she must untangle the mystery of that suicide and its consequences in order to keep from losing her mind.

"A mind-bending marriage of ambitious literary theory and classic murder mystery...In this intricately plotted novel, Hartman spins the familiar trappings of gothic mystery together with a fresh postmodern sensibility, producing a story that's as rich and satisfying as it is difficult to categorize.... As Hartman skillfully blurs the lines between fiction and reality, the book becomes a profound meditation on art, identity and their messy spheres of influence...An exciting, original take on the literary mystery genre." (Kirkus Reviews)

What listeners say about The Rules of Dreaming

Having thoroughly enjoyed The Devil's Chaplain by Bruce Hartman, I thought I'd give The Rules of Dreaming a listen. Firstly, let me say that the narration by Neal Arango is excellent. He is an extremely talented voice actor, I thought he turned in a stellar performance in The Devil's Chaplain and, once again, in this book, his abilities are thoroughly tested and he scores A+++ throughout. I'll definitely be searching for more books Mr Arango has narrated. Now, onto the story. I have to confess I got somewhat confused; there is difficulty knowing which Hoffman is being referred to, if the talk is of composers, story characters or characters in this story. I was so busy trying to work out who was who that I kept losing the thread and having to go back and listen again. After a while I realised that it didn't actually matter and I just let the story kind of wash over me, and that made it so much easier. It may be that books such as these, where there are a number of people with the same or similar names, just don't translate well to audio, (or it may be that I'm a bit stupid). Anyway, once I stopped driving myself crazy trying to figure out exactly what was going on with who, I enjoyed it much more. I'm still not convinced I know precisely what happened, but I understood enough to get the gist. As I'm unlikely ever to be asked to write a paper on the intricacies of The Rules of Dreaming, comprehending the book on a very superficial level was more than enough!

Dubin, an unscrupulous detective-turned-blackmailer, finds himself outside the Palmer Institute in northern New York. He’s investigating the apparent suicide of Maria Morgan, a local opera singer and the wife of a wealthy landowner, some seven years ago. His motive isn’t necessarily to find the truth.

Ned Hoffman, a psychiatrist who is new to the institute, is charged with the care of Hunter and Antonia Morgan, twin siblings and progeny of Maria and Avery Morgan. He’s concerned that the treatment they are receiving may not be in their best interest.

Each begins to question the same series of events from seven years before, trying to determine what really happened to Maria, and why Hunter and Antonia are in the institute. They soon learn that there’s more to Maria’s suicide and her children’s descent into madness than meets the eye.


In The Rules of Dreaming, Hartman uses a diverse cast of characters to tell a chilling tale of power, corruption, greed, and consequences. Each character is so well defined that it is often difficult to tell whose narrative is the most important to the story. Hartman’s seamless blend of first and third person narration keeps the mystery at the fore, while always leaving more questions than answers. From the first page to the last, I found myself reading at a frenzied pace to unravel the mystery. The moment I reached the words ‘the end’, I immediately wanted to read it again to look for hidden clues. The Rules of Dreaming is unquestionably the most engrossing mystery story I’ve read in years!

Neal Arango’s narration of the story is wonderful. Each character has a unique voice which makes the task of keeping track of a dozen or more characters a bit easier.

I did not know all the way to the end who it was. I kept guessing but the true killer was not someone I guessed once. Truly a twisting tale. Loved the story!

You don't what's what or who's who in this listen! Could Dubin be someone other than who he says he is? Is Nicole really crazy?? Whose daughter is Olympia, anyway? Was Maria murdered or was it suicide? Are Hofmann and Bratolli crazy or brilliant and about to cure Hunter and Antonia? Are Hunter and Antonia as crazy as they appear?

Maria commits suicide while rehearsing to perform the opera of the Tales of Hofmann. This sets the stage for a real life drama acting out the opera seven years later. The setting is a mental hospital where her two children have been placed after her death. They are schizophrenics who have every appearance of living in their own world. The real and surreal are so deftly painted that you really don't know what happened to who and who anybody really is until the very end! I did guess what happened and by whom about an hour from the end of the listen but I wasn't entirely sure I was right until the last scene unfolded.

Neal Arango does a great job with the narration and brings the story to life.

I received this audiobook from Audiobook Boom! in exchange for an honest review.

An Absorbing Story-Many Twists and Turns

This was a great mystery whodunit. The characters were quirky and fascinating in their quest to find the murderer of the opera singer that takes place 7 years prior.

You just want to devour the book to get to the bottom of the mystery, but try to savor the rich characterizations, and plot development. I look forward to listening again.

I received this book for free for an honest and unbiased review of the book.

Dubin and Hoffman are 2 people who are looking into the death of Maria, an opera singer who left her 2 children in a psychiatric unit after her death. The 2 are trying to figure out if it was suicide or murder. In the telling of the story we go back and forth in the telling of real life and opera acts. I had a hard time distinguishing when real life was taking place and when the opera acts were taking place. It was a good story and mystery, I just had a difficult time keeping up with what was going on and when it was happening. There were 3 women involved with Hoffman at different times and I guess confusion is just my one word description of this book.
The narrator was a good choice for this book, he did a great job.
This book was not for me but I would not say it was bad.

This one was just a bit slow to start, but not for long. Once it picks up some steam, it really gets interesting.

I did not see that coming! Has a delightful shocking twist that I really did not see coming!

Great psychological story with a mysterious flare. I enjoyed this one!

Recommend for those who enjoy mystery &/or psychological type books!

Lots a twists and turns

I didnt know anything about this story going in, and as I read along, that lack of preconceptions helped, because this thing has more twists and turns than a politicians campaign speech. With a cast of wonderfully diverse and interesting characters, a plot that keeps you guessing until the very end and a narrator that brings it all to life, this is a story and fan of mysteries should enjoy listening to.

I was given a copy of this book free of charge by the narrrator in exchange for an honest review through Audiobook Boom.

If you could sum up The Rules of Dreaming in three words, what would they be?

What other book might you compare The Rules of Dreaming to and why?

Has a very "Shutter Island" kind of feel about it

Have you listened to any of Neal Arango’s other performances before? How does this one compare?

Yes, as with In the Shadow of Angels and Battle Earth, Neal does a phenomenal job of capturing the character's voices and performing them convincingly.

Without actually giving it away, there is a big reveal about the character narrating the story that really surprised me and Neal delivered that moment beautifully.

Would you consider the audio edition of The Rules of Dreaming to be better than the print version?

I haven't read the print version.

Have you listened to any of Neal Arango’s other performances before? How does this one compare?

I haven't but its a pretty good reading on this one. I would listen to others

The ending was a let down. so again disappointed.

Bruce Hartman has writing skill. Neal Arango is a pretty good voice actor. This particular work just didn't work for me.
This audiobook was provided by the author, narrator, or publisher at no cost in exchange for an unbiased review courtesy of AudiobookBlast dot com.

Thanks for the opportunity to experience this work.

This was ok. at the beginning i was confused sometimes. it seemed we had 2 men telling the story from their point of view? i stuck with it but it was just ok. Neal Arango narrates this and he does a good job. i love the cover art for the book.