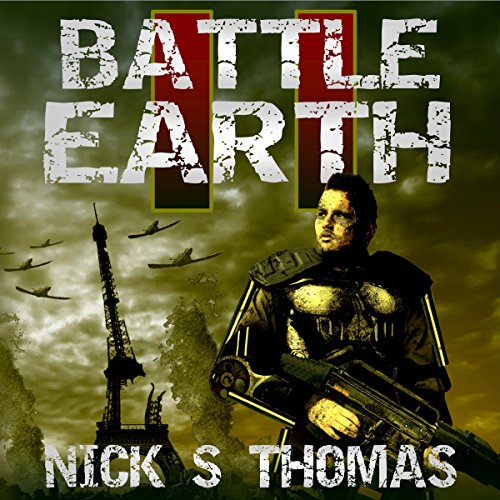 After halting the enemy advance across Europe, the war continues to rage in Paris. International armies have converged on the French city to make a stand. When Taylor investigates a mysterious sighting in their northern perimeter, he sees that enemy forces are encircling the city. The humans are quickly running out of ways to flee from the death trap.

New advancements in technology could change the course of the war, if they can survive long enough to get the weapons onto the front line. The combined allied forces continue to be driven back, but Major Taylor learns of an even greater threat. The aliens are developing a weapon which could bring destruction to the human race overnight. Only one hope remains for the planet. A daring mission nobody could hope to survive.

After the events from the 1st in the series this one is more of a prepare to strike fully as they battle against the superior weapons and struggle to find an advantage to even the playing field. A good mix of solidier and science gives this a worthwhile listen to as the battles work out well.
Narration by Arango is pretty good as well.
I requested this audio and have decided to leave my thoughts.

I am glad to say that this story is just as good if not better than the first in the series. The quality of the writing and narration continues at its high standard and I finished it in no time.

I already have the next book ready to go and I cannot wait!!

Please note that I was provided with a free copy of this audiobook to give a non-biased review.

"They had lost so many. But there was still hope"

I received this book as a complementary copy from the author, narrator or publisher via Audio book Boom, in exchange for an unbiased review and had not previously read the first volume.of Battle Earth. This, however, did not distract from the story which was obviously a continuation of an alien invasion which had already defeated the Mars Colony, mostly destroyed that on the Moon and was rapidly expanding it's destruction on earth. Africa and cities in Europe had already fallen, only Paris had managed to hold out against the onslaught. Humanity was at risk. How can it be saved?
This is a straightforward tale of human ingenuity, bravery and comradery in the face of overwhelming odds and, as such, concentrates far.more on battle depictions than character building. Survival suspense is factored into every chapter. Neal Aramco's narration is very good where dialogue is required, with individual voices clearly defined, but I found his reading of the text somewhat disconcerting with some odd pronunciation and a downturn at the end of most sentences which gave it a depressed feel. This said, I enjoyed the book overall and would recommend it to lovers of military action.

This 2nd book picks right up with the same characters you know from the first one and continues the war. Well written and well narrated it delivers on a aliens vs human war told from the front Lines soldiers point of view. Delivers on actions weapons
And heroes and aliens galore. Can't wait for the next one! I received this audiobook from the author narrator or publisher for free via audiobookboom in exchange for an unbiased review

This book is sort of like Edge of Tomorrow meets Battle: Los Angeles. The author does a very good job at describing the hopelessness of fighting a nearly numberless foe that is better in almost every way. He also conveys multiple scenarios where through courage and loyalty you can overcome almost any situation. I loves listening and I plan on finishing the series as well as the Battle: Beyond Earth series.

The narrator did a good job of conveying a militaristic voice when in combat situations. The only problem I had was that he pronounced some words differently(I do not say wrong because I may be wrong) than from what I have heard in other books and it Slightly confused me at times.

This book was a full on action packed wonder from start to finish.

I like the camaraderie between the team and that the mission changes as needed.

Neal Arango did a good job with the many voices.

I was voluntarily provided this review copy audiobook at no charge by the author, narrator, and/or publisher.

I voluntarily left this review.

the story takes off right where book one ended and is told from multiple POVs and different location and this is one of the things I actually loved about this book. It keeps things interesting.
There is not a lot of backstory but I did not mind this and it had plenty of action.

Looking forward to the third book in the series!

All we can do is give our all!

Our forces receive a small victory! Earth scientists have been hard at work reverse engineering weapons and armor for our beleaguered troops. They have manufactured an Exoskeleton fighting suit composed of improved armor and anti-material weapon. Twenty-five suits have been issued and production is in full swing. All hope that this new technology will be the turning point in the war. The aliens, now known as the Krycenaean, have captured Captain Jones and Private Walker. A rescue attempt was made but the holding area was empty. The military and colonist forces left on the Moon Base are also tired of waiting for defeat. Commander Kelly has decided to take the fight to the enemy. The future of our people on Earth and the Moon is still dark but there exists a glimmer of hope that the scales may be leveling. On the other side of the coin, there is evidence that the enemy is building a manufacturing plant on the west coast of France. This new facility must not be allowed to exist. Some of the same quirks still apply from the prior review but I choose to overlook them for now and enjoy the tale. Three.point.five. I was given this free review copy audiobook at my request and have voluntarily left this review.

Military tale with a veneer of science fiction

The second installment of the Battle Earth series, Battle Earth II is fast moving with plenty of action. Basically it is a military tale with a veneer of science fiction. We are finally given a few more details about the alien invaders and a glimmer of hope for the human defenders.

Would you consider the audio edition of Battle Earth II to be better than the print version?

Did not read the printed version

Which character – as performed by Neal Arango – was your favorite?

Yes, Very much so

If you could sum up Battle Earth II in three words, what would they be?

Nice follow up to the first book, I enjoy these types of scifi novels.

I received this book free from the publisher, narrator and or author for a honest review and unbiased option via audio book boom. this was a great book boom .
I listened to the book at one sitting it was very good

CONS: Not a lot of backstory. Narrator OK

DETAILS: The storyline was interesting. If you did not read/listen to the first book in the series, not a lot of backstory; the storyline seems to takeoff right where the previous book ended.

The author obviously is from Europe as the measurements are in meters and uses a few terms that are not in the average American’s vocabulary. An example of this is he uses the term football pitch a few times; which for those unaware (as I was) is a soccer field. This does not deter from the story at all.

I don’t know if the narration got better as the book went on, if I just adapted to Neal Arango’s style. There are times when it seemed like he was simply reading the story with voiceover’s tossed in later. Like I said I didn’t notice it as much as the story went on, that could be that because it was different than I was used it and I adapted.

Feel free to contact me in regards to this review, by either replying to the review or via e-mail at reviewrrob at gmail dot com