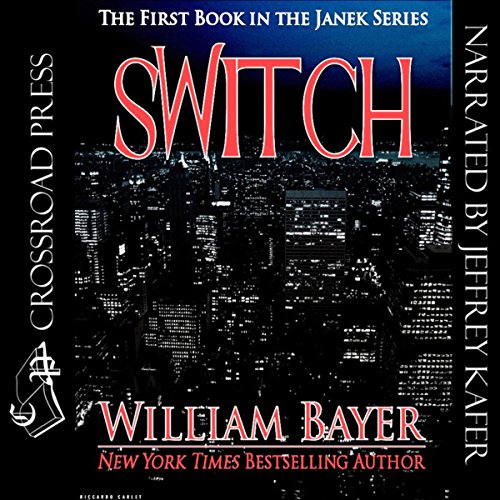 At first the two killings seem unrelated. The lonely call girl murdered on New York City's West Side had never met the prim schoolteacher slain across town in the far safer preserve of the city's Upper East Side. But someone has decapitated them both and switched their heads: a deed that is apparently its own motive, a crime as pointless as it was perfectly executed.

Detective Frank Janek immediately knows that he has entered the realm of a lethal madness. Middle-aged, divorced, a man centered solely on his work, Janek is practiced in piercing the minds of the criminals he pursues. In the absence of clues from the killer, he has only the awful symmetry of the crime to work with, only his own finely honed intuition. "This was a crime conceived in the shadows," he thinks, "There was precision in it, and passion. Concentrated rage and a love of order. A need to beautify. Even some strange, unfathomable, as yet uncatalogued species of love."

The challenge-to become as precise, as creative, as cold as his prey-begins to take its toll. The tenuous psychological thread leads Janek back into the unsettled past-- not only the killer's but his own. His own passion and rage and unresolved love. The love he bore for the man who trained him-a retired cop whose apparent suicide he has shied from investigating too closely, the passion for justice that has made him a marked man within the police fraternity. The rage he feels at ancient crimes that have finally burst into full and terrifying flower. And most of all, the new love he feels for the mysterious woman in whom all these strands of the past seem to converge. It is Janek's love for Caroline that leads him at last to a blinding vision of the purpose behind the grisly double homicide.

Too late, he realizes that the case of "Switched Heads" may only be the bait....

" Switch has the stunning intensity of The First Deadly Sin, and I can't think of a higher compliment." (Mary Higgins Clark)
"A hugely entertaining police procedural from the Edgar-winning author." ( The New York Times)

Great reading of my novel by Jeffrey Kafer!

Kudos to Jeffrey Kafer for his superb reading! He captures perfectly the rueful middle-aged angst of my character, Frank Janek, as he goes about solving his greatest case. I'm hopeful that Mr. Kafer's will be reading the other two more books in my Janek series, "Wallflower" and "Mirror Maze" for Audible.

Would you try another book from William Bayer and/or Jeffrey Kafer?

My Review
Well, the publishers summary is long enough to give every reader a pretty good idea of what this book is about, but it's a bit darker than I expected it to be.
The work worn, hard boiled middle aged detective, Janek, takes on a strange case, very strange indeed, it all begins at the funeral of retired detective Al DiMona. Al was Janeks' rabbi - cop slang for mentor - Al had committed suicide by "eating his gun". His death hit Janek hard, he had this feeling that he should look deeper into what drove his friend to do such a thing, especially as Lou, Als wife, had insisted to Janek that he had been working on something secretive prior to his death. At the funeral he sees a woman, she looks out of place, so he decides to introduce himself to Caroline. She tells him she was just a friend of Al, just came to say goodbye.

Before he leaves, he's told that Chief of Detectives Hart wants him to ride back with him, it's during this trip that Janek is given the "switched heads" case of the two murdered women. Seems two detectives were called out, one to each case, they got into a fight about who should investigate, so Chief Hart settled it by giving it to Janek.

This is where his head scratching begins, it's all so bizarre, everything about it just plain weird, how's a man to start? The first few chapters are compelling reading, then it gets a little dull, there's a lot of conversation, conjecture, what ifs. In truth, all probably quite realistic but it doesn't hold the attention quite so well as the first part of the story.

Then there's the mystery of Al, and this is where Caroline has the leading part, having fallen in love with her ( and pretty darned quick if you ask me) Janek discovers she has not been entirely truthful. By this time, it's all become very complicated!

Despite being a little dull in parts, the author does have a wonderful way with words, he describes a room and you are there, seeing it. There's a very poignant passage about Lou, describing her reaction when, whilst cleaning the bathroom she hears the shot, she knows, she just knows she is going to walk down the stairs and find the dead body of her husband Al.

Narrator
Wonderful performance by Jeffrey Kafer, he has the perfect voice for Janek, he switches faultlessly from character to character, gender to gender and it's seamless. Easy to listen to with a good pace, there's a lot of emotion in this book, from overwrought Lou to angry, frustrated detectives. Then, of course, there's the cold, cold murderer! Jeffrey Kafer nails it.

This audiobook was gifted via Audioblast in return for this, my honest review.

Too much strong language!!!!

Couldn't get past the foul language.

What was most disappointing about William Bayer’s story?