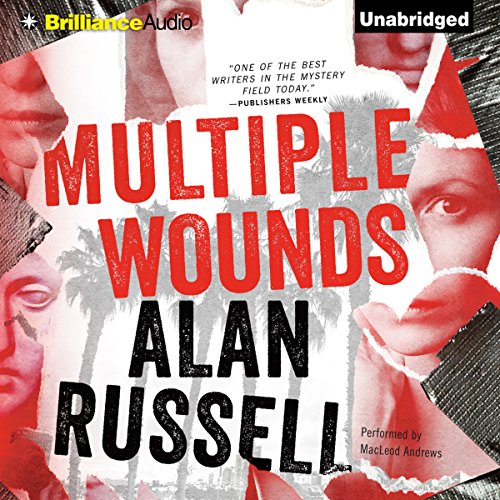 After the brutal murder of an art gallery owner, the beautiful and mysterious artist Holly Troy seems to be the key to finding out what really happened on the night of the homicide. Unfortunately, Holly also suffers from dissociative identity disorder, and many of her personalities come straight from classical mythology, from the powerful Cronos and Pandora to the fickle Fates. Holly has no idea who she was the night of the crime - whether she witnessed anything, or even if she was the killer herself. Homicide detective Orson Cheever must unravel the complex labyrinth of Holly’s mind before he can find the truth, but he soon finds himself drawn into his own past when Holly begins exhibiting the personality of a five-year-old girl. Desperate to solve the crime and escape his own long-buried grief, Cheever plunges ahead, treading the line between investigator and protector in this suspenseful psychological thriller.

I LOVED this book! The reader is fantastic! 15 stars no question.

I rarely get emotional when I'm reading or listening to a book but the wonderful prose coupled with the genuis reader did it to me.

Okay, I admit to not fully believing in multiple personalities as described in this book. So right away it loses 2 stars for me. However, the characters are so well written and developed I had no problem finishing the book.

Sometimes when I am frustrated with a book it is because I really liked a lot of it. This has a fascinating premise and a great conclusion, but I felt cheated getting there.

I loved the reader heis one talented guy.

This story regarding a suspect with multiple personality disorder was very believable, intelligent, and interesting. I was very impressed with the author's abiity to make the reader really care about all of the characters. This was my second book by this author, and both were great.
The reader did a fantastic job at being able to portray all of the characters - even when many were in the same scene at the same time. Many narrators are not successful with voices opposit to their sex. This narrator performed women without sounding so odd that it was distracting.

The human mind is the biggest world of all.

Multiple Wounds is another novel about multiple personality disorders, but this one is different. Most of the many personalities of the young woman are Greek gods. The young woman's father was a professor who read and acted out books on mythology when she was young. He was also a pedophile. Multiple Woulds is a profoundly troubling look into a human mind that has been altered by childhood memories that no one should have. Helen's mind is merely trying to cope with the sick actions of her parents when she was young.

I give Multiple Wounds 4 stars, but be aware that it is a profoundly troubling psychological thriller that should be approached with caution. To say the book is dark is an understatement. I wish I had not listened to it.

Just can't listen to it anymore

What disappointed you about Multiple Wounds?

Long drug out uninteresting storyline. I listened for two hours and just couldn't go on.

Has Multiple Wounds turned you off from other books in this genre?

What does MacLeod Andrews bring to the story that you wouldn’t experience if you just read the book?

He was the best part about this book. Correction, only good part

Where does Multiple Wounds rank among all the audiobooks you’ve listened to so far?

I picked up this title based on the review of a listener I follow in Audlible. His review was spot on even though he claims skeptism about multiple personalities. This might not be the best murder mistery I ever read but it is very well written, original and entertaining. The young suspect with the multiple personality disorder manages to elicit sympathy. I liked the investigator and the psychiatrist. The characters have surprising depth and the plot does not want for twists. There is a Greek mythology element mixed into everything else that I rather liked.

Did MacLeod Andrews do a good job differentiating all the characters? How?

I loved the narrator. He managed to add depth to the characters without necessarily doing the male/female voice thing. He inhabits detective (or is it Sargent) Cheever perfectly.

If you are looking for a bit of well written, slightly gruesome entertainment with characterization of unexpected quality and above average narration, this is for you. Enjoy!

I purchased due to Nora Roberts Boons bough trilogy as I liked the reader. THIS was NOT for me. I did not realize I could sub select on a reader. This is a mystery which I like but this author is not for me. Too wordy in the wrong direction; too slow.

What could Alan Russell have done to make this a more enjoyable book for you?

A faster pace read makes a good mystery for me.

Everything, he was the saving grace. I had to skip chapters to finish.

Was Multiple Wounds worth the listening time?

Absolutely not for me. I am skipping chapters to finish.

Boy, knowledge is power and I have now learned I can refine my search type for romance by reader. It is the reader that I buy not just the story.

i farly good book about DID